Labor’s climate change policies commit Australia to being part of the problem rather than part of the solution, as the nations of the globe struggle to save the world from runaway climate change over the next few decades, says Doug Evans.

WE ARE ALL currently transfixed by the second coming of Kevin Rudd.

The action is frenetic. Can he stop the boats? Will he vanquish the faceless men? Might he deliver us from Abbott and his unscrupulous band of ruffians, after all?

No-one's talking about global warming, but it hasn't gone away. Apparently forgotten, the climate kettle continues to simmer and the temperature rises while the clock keeps ticking ominously.

In the run up to the 2013 Federal election that will determine government for most of what remains of the 'critical decade', it's timely to remind ourselves just what our political parties plan to do about the most overwhelming issue of our era and one that will profoundly affect us all.

Let's talk about Kevin and the Labor Party first.

The Labor Party's climate change policies – except for Prime Minister Rudd’s early transition to an emissions trading scheme – are as they were at the recently concluded federal parliamentary session. Most of these are contained in the ALP National Platform Chapter 4, beguiling entitled A Clean Energy Future. These are not the only Labor policies that will shape Australia's response to climate change. There are other policies in the Platform under the heading 'Minerals, resources and energy' that have profound implications for our future climate, but I'll address them later.

The prime measure of any political strategy to address the threat of global warming is: does it adequately reflect the science? In this respect Labor’s climate change policies fail decisively. They do not adequately address the climate threat. 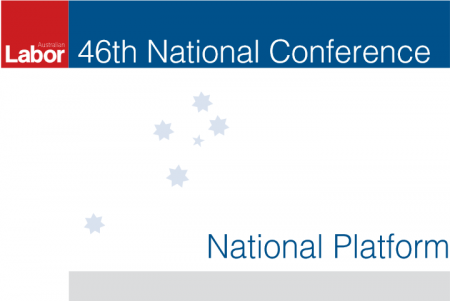 A superficial examination of the National Platform, however, suggests it does reflect the science:


'The foundation of Labor’s plan is the climate science. We are advised by scientists that the world’s climate is changing and that there will be severe, adverse effects on our nation if the trend continues.'

Following the 'Introduction', after some self-congratulatory paragraphs under the headings 'Labor Values' and 'Labor Achievements' comes nine pages of commitments entitled ‘Labor Priorities’.

Those that directly address climate change fall under the section headings set out below:

Despite the absence of significant commitments in important areas like 'Energy efficiency', 'International action on climate change' and ‘Adapting to climate change we can’t avoid’, these section headings suggest a comprehensive and relevant set of policies. However there is not much scrutiny and thought required before the doubts and questions begin to appear.

Two big questions are discussed below.

Question One: Under the section heading ‘The transition to a clean energy future’, the ALP undertakes to

Are these numbers high (or low) enough?


‘… continue to work toward an increasing proportion of clean energy generation beyond the current mandated target of 20 per cent by 2020.’

Laudable as this aim may be, the term ‘clean energy’ – as opposed to ‘renewable energy’ – used repeatedly throughout these policies is significant. Labor adheres to the view that gas fired power generation is less carbon intensive than coal fired generation and therefore warrants the description clean and that CCS technology will yet make coal a viable source of ‘clean energy’. But is either belief grounded in fact?

Addressing the first question, What does the best climate science say is required to stabilize greenhouse gas emissions consistent with halting the global temperature increase at 2ºC?

'Currently we are 22% of the way through the budgetary timeline, but we have emitted 328 Gt of fossil fuel CO₂, burning through nearly 33% of the budget. We need to change our path soon from one of rising to decreasing annual emissions.'

Figure 1, below, makes it clear that, the longer we wait, the more drastic must be the reductions in emissions if we are to achieve the goal of stabilizing temperature increase at 2ºC.

This shows that if global emissions were stabilised by 2020, to avoid exceeding the danger limit they would thereafter need to decline rapidly accelerating to around 9% p. a. by 2027. This precipitous rate of decline must be maintained for seven or eight years before easing slightly and ending at ZERO GREENHOUSE GAS EMISSIONS by 2040.

That is what the science demands for us to have a 75% chance of stabilizing global temperatures at around +2ºC. Remember that the almost certain result of not achieving this target is runaway global warming with its nightmarish outcomes for our future environmental viability. No 'ifs', no 'buts', no 'wriggle room'.

Remember also: this is not something that will occur at some point in the distant future. Any Australian child under ten years old alive today is likely to see these changes in his/her lifetime.

The rate of ‘de-carbonisation’ indicated by the graph in Figure 1, above, although technically feasible, may be seen to be politically impossible (in which case Armageddon awaits). It will certainly be difficult, expensive and disruptive to achieve — and for each high polluting nation that fails to achieve this target, the task of saving our collective backsides becomes rapidly more difficult.

This is substantially less than a quarter of the current emissions abatement commitment of the EU nations. And when the science demands complete carbon neutrality by 2040, an 80% reduction below 2000 levels of pollution by 2050 is far, far, short of what is required.

Furthermore,  the reductions claimed by ALP policy are little more than an accounting trick, perpetrated to push the problem far enough into the future so as not to unduly disturb the comfortable status quo in the "lucky country" and avoid (for now) the unpalatable political realities of squarely facing the problem.

Figure 2, below, shows that, under the ALP's existing policy, Australian domestic emissions are predicted to increase by 13% above 2012 levels by 2020.

This is possible because two thirds of the trumpeted ‘drastic reduction’ in pollution is intended to be purchased in the form of off-shore carbon credits by polluters to off-set their on-shore (domestic) pollution. To achieve the necessary emissions reduction target all countries, especially the high polluting ones who are responsible for the lion's share of the problem, must begin to reduce their emissions urgently. It is not nearly good enough to buy emissions reductions from poorer countries, who have not played a significant part in creating the problem, in lieu of cutting our own emissions.

The answer to Question Two is that gas is almost certainly not cleaner than coal as a power source and that CCS technology, despite Labor’s prayers, will not make coal an acceptable energy source. The extent to which Labor is gambling that both of these statements are untrue is shown elsewhere in the National Platform document. For example in Chapter Three, under the heading 'Mineral resources and energy', Labor commits to [IA emphasis]:

Under Labor’s fossil fuel export policies greenhouse gas emissions from Australia coal and gas exports will dwarf domestic emissions by a factor of three- or four-to-one.

Researcher Guy Pearse, perhaps Australia's most authoritative voice on this topic, says that the expansion of Australian coal exports with the bipartisan blessing of Labor and the LNP will mean that by


‘...2020 or soon thereafter, Australia is exporting nearly twice as much CO2 as is Saudi Arabia today.’


‘… Australian coal exports will generate around 75Gt (billion tonnes) CO2 between now and 2050 – perhaps another 5Gt will come from domestic coal use, and 8 -10 Gt from LNG if the expansion of coal seam gas proceeds. This totals around 90 billion tonnes of CO2, compared to current total domestic emissions of 0.55 billion tonnes a year, or just over 20 billion tonnes in total to 2050 if current emissions were held constant.’

Ninety gigatonnes of GHG from Australian coal and gas exports would be 13% of the remaining global total greenhouse gas emissions budget to 2050 and is unthinkable — but that is where current ALP policy is taking us.

Anyone inclined to make the standard response to this criticism of 'yes but the Australian economy is so dependent on the all important mining industry that creates so many jobs and so much wealth' should look here and here and think again.


'From this perspective, neither Labor nor the LNP by their behaviour indicate any significant understanding of the policy consequences of the carbon budget approach which the government’s own Climate Commission advocates, nor any grasp of what needs to be done in this "critical decade".'

The globe is already entering a mass extinction phase, with all that this entails for the ecosystems that we are so dependent on for our continued environmental viability. As the temperature rises, it will get worse, much worse.As Cook and Nuccitelli pointed out in their piece for The Conversation the world is on track for a catastrophic four degrees of warming by century's end. This will have profound negative social, cultural and economic implications for all of us. Australia is already feeling the impacts of global warming.We are already experiencing rapidly escalating extreme weather events as a direct result of global warming and Australians are already dying from the effects of this rapid climatic shift. This is not fanciful scaremongering. It is fact.

Well before we suffer four degrees of warming, however, the necessary tipping points will have been passed to make runaway global warming inevitable.

The first of these, an ice-free Arctic is now imminent. This is now inevitable and will be a powerful driver in itself of further warming. Huge volumes of previously frozen greenhouse gas are already bubbling up from the vast frozen store beneath the Arctic Ocean. The permafrost is melting at an increasing rate releasing massive quantities of methane.

We are teetering on the brink of runaway climate change that will decimate – perhaps even terminate – the human population of the planet. The chance to avoid climate catastrophe is rapidly disappearing or perhaps is already gone, as Clive Hamilton has explained in chilling fashion, in his book Requiem for a Species.

Labor’s current policies commit Australia to being part of the problem, rather than part of the solution, as the nations of the globe struggle to save our collective backsides over the next three decades. They may be better than those of the LNP but they are certainly not adequate to the task that confronts us. A radical tightening of policy is required if we are to pull our weight as global citizens but there are no signs currently of awareness of this 'inconvenient truth' within the Party of the Fair Go.

The one positive that the ALP has going for it in terms of its current climate change policies is not its much vaunted 'price on carbon', which at present looks like no more than the most cost effective path to runaway climate change before the end of this century.

No, its one positive is the fact that the Clean Energy Futures legislation contains the necessary administrative infrastructure to allow rational science based assessments of the task ahead and how to achieve it. This must be protected.

The LNP opposition has promised to dismantle it if they win power, but more of their idiotic response to our climate emergency in Part 2 of this series.