With the IPCC report now released and a new Government in power in Australia, Douglas Evans looks at the state of the global and domestic climate, and where it's all going.

WE HAVE JUST changed governments.

During the election campaign, the silence from both major parties on climate change was deafening. But, of course, the warming goes on.

Now that the election dust has settled and with the Fifth Annual Assessment Report of the IPCC just released, it is a good time to review the state of the climate and global response to the growing crisis.

HOW DIRE IS THE CLIMATE CRISIS?

The Fifth Assessment Report of the IPCC (2013) has reminded us again that the climate crisis is dire and rapidly worsening.

On September 28, The Guardian summarised the core message of the report as follows:


'If people continue to emit greenhouse gases at current rates, the accumulation of carbon in the atmosphere could mean that within as little as two to three decades the world will face nearly inevitable warming of more than 2C, resulting in rising sea levels, heatwaves, droughts and more extreme weather.'

A global temperature rise of 2ºC above pre-industrial temperature is considered to be the threshhold of dangerous climate change. At +2ºC, the scientists argue, we have a 50% chance of avoiding critical environmental tipping points that will trigger further temperature rises irrespective of the actions of humans — so-called runaway global warming. Not great odds but the best we can achieve.

Only the most stringent – and therefore least likely – scenario gives any hope of stabilizing temperatures at or below +2ºC. All other scenarios predict a median temperature increase by the end of the century of between 2.4ºC and a frightening 4.3ºC.

Late in 2012, The World Bank published a report detailing the impacts of probable future climate change on developing countries.


Without further commitments and action to reduce greenhouse gas emissions, the world is likely to warm by more than 3°C above the pre-industrial climate. Even with the current mitigation commitments and pledges fully implemented, there is roughly a 20 percent likelihood of exceeding 4°C by 2100. If they are not met, a warming of 4°C could occur as early as the 2060s. Such a warming level and associated sea-level rise of 0.5 to 1 meter, or more, by 2100 would not be the end point: a further warming to levels over 6°C, with several meters of sea-level rise, would likely occur over the following centuries.

The situation is dire but can the problem still be fixed? What do the governments of the world need to do?

What do the governments of the world need to do to avoid this catastrophe?

The short answer is that they need to begin reducing greenhouse gas (GHG) emissions as a matter of extreme urgency.

The German Advisory Council on Global Change (WBGU) has calculated that, to keep global warming less than 2ºC above pre-industrial temperature (which may not be safe) with a probability of 67%, global greenhouse gas (GHG) emissions would have to peak by 2020 and reach zero by 2040. If the peak occurs after 2020, the maximum reduction rate would have to exceed 9% per year, which would almost certainly cause widespread economic collapse.

This is the critical decade, in which we must turn around the current warming trajectory that, according to the World Bank Report linked to above, has

It's now or never. 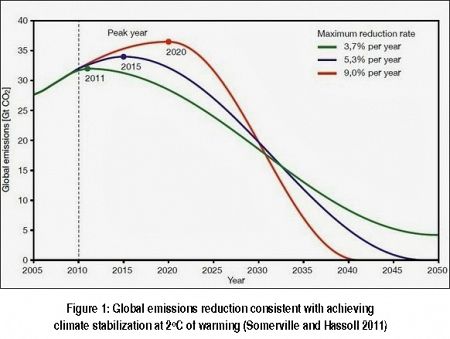 The red line on the graph reproduced as Figure 1 (above) shows the world's last chance GHG emissions reduction scenario – short of probable economic collapse – consistent with holding global temperature increases to around a dangerous, but liveable, 2ºC. 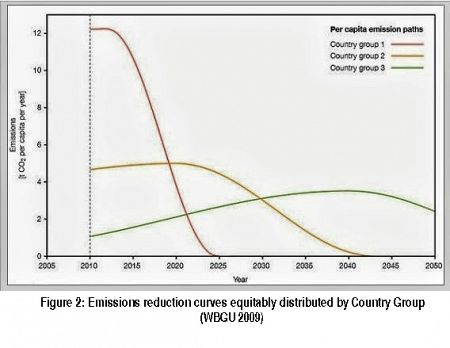 Figure 2 shows clearly that for Group 1 countries (which includes Australia) to fulfill their part of the global emissions reduction task, they should have just begun to cut their GHG emissions and have until 2025 to bring their emissions to zero.

But this has not happened and cannot be achieved. So, have we already missed the bus? Are we irrevocably committed to a downward spiral of increasing social and economic chaos en route to climate catastrophe? 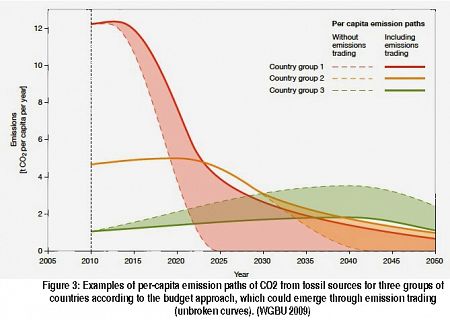 The diagram reproduced here as Figure 3 (above) shows global emissions reduction curves consistent with the achievement of the +2ºC 'safe' climate target.

This scenario was developed in 2009, prior to the UNFCCC climate fiasco in Copenhagen in 2011. It presupposes broad international agreement on binding emissions targets and the establishment of a row of international institutions to drive the transformation from 2015. The members of the UNFCCC have agreed to work towards a global climate agreement to be established in 2015 and commencing in 2020. The three diagrams presented above (figures 1, 2 and 3) clearly describe the task that this last chance global agreement is faced with. For the time being, there is still hope (just) that we can scramble and save our environmental future.

The WBGU report concluded as follows:


Courageous political action is now called for – either that or an honest declaration of surrender in the face of the size of the climate challenge and the years lost in the cause of climate protection since the Earth Summit in Rio de Janeiro of 1992.

If that is what is needed what are our chances?

What progress is there towards policy consistent with the demands of the climate science?

Despite individual positive indicators, the general response of the world to this growing crisis can only be described as denial.

The IPCC describes the problem in terms of a carbon budget. About 531 billion metric tons of carbon have been emitted by fossil fuel combustion, forest clearance and cement manufacture since 1750. Capping total greenhouse gas output at 840 billion tons gives a 50% chance of meeting the 2ºC (3.6ºF) target. Global emissions in 2020 will be at least 52 billion tons of carbon-dioxide equivalent, or 18% more than the 44 billion-ton limit needed to meet the 2ºC target, said the  UN in a report in 2012. At the predicted rate for 2020, the remaining 309 billion tons of carbon will be used by 2040.


'A budget with a reasonable chance of staying under 2 degrees would be exhausted by 2040 if we carry on as we are,' Byrony Worthington, director of Sandbag Climate Campaign, a London lobby group, said today by e-mail. 'It means roughly half of known fossil fuel reserves have to stay in the ground or be fully captured and stored.'

Clearly, to avoid disaster, the world must be looking to rapidly scale back fossil fuel production and combustion. This, however, is not happening:


Coal will replace natural gas as the dominant fuel for producing electricity in Southeast Asia as the region almost doubles its energy consumption in the next two decades, according to the International Energy Agency. While the trends support plans by Indonesia, the world’s top exporter of thermal coal, to almost double output by 2035, emissions linked to climate change will increase at the same rate, the IEA forecasts. Coal, which emits about twice as much carbon as gas, is the fuel source for about 75 percent of power-generating capacity being built by members of the Association of Southeast Asia Nations, the IEA said. 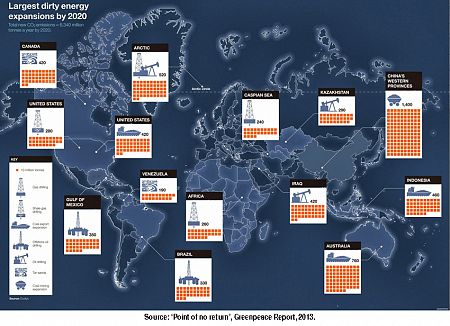 Globally, the Greenpeace report Point of No Return – an analysis of the planet's 14 largest coal, oil and gas projects – concludes:


In 2020, the emissions from the 14 projects showcased in this report – if they were all to go ahead – would raise global CO2 emissions from fossil fuels by 20% and keep the world on a path towards 5°C to 6°C of warming.

Meanwhile, in January, back here in the 'lucky country', drawing on the same Green Peace analysis, Fairfax reported:


An analysis of the planet's 14 largest proposed, coal, oil and gas developments - to be released on Wednesday by Greenpeace - finds if Australian coal production expands as projected, the mining, production and burning of the extra resource would, by 2020, result in 759 million tonnes of new global carbon dioxide emissions a year over 2011 levels.

The window of opportunity is open for a little longer, but the chasm between what we must do to halt global warming at safe levels and what is actually occurring could not be wider.

Coming soon, in Part Two, I will examine what, if anything, can we do about it.