With the world teetering on the brink of runaway climate change, Government has clearly failed our environmental future, Douglas Evans says fossil fuel divestment may be our last hope.

IN WHAT WILL BE SEEN in future to have been an act of supreme self-destructive stupidity, Australians have just elected a conservative government that denies the scientific evidence of global warming and regards it as a socialist plot. Furthermore, they have elected and delivered the Senate balance of power into the hands of Clive Palmer, whose business interests and personal wealth are inextricably linked to the destruction of our climate future.

With time short and the world teetering on the brink of runaway climate change, attention has moved to direct action that does not involve the ballot box nor require the co-operation of politicians. Despite the inherent conservatism of institutional investors there is growing awareness of the financial risks associated with a massive global carbon bubble and in strategies for fossil fuel divestment.

The international climate change protest group 350.org is campaigning globally under the banner of Fossil Free against investment in fossil fuel extraction and combustion.

They explain it as follows:

If it is wrong to wreck the climate, then it is wrong to profit from that wreckage. We believe that educational and religious institutions, city and state governments, and other institutions that serve the public good should divest from fossil fuels.

We want institutions to immediately freeze any new investment in fossil fuel companies, and divest from direct ownership and any commingled funds that include fossil fuel public equities and corporate bonds within 5 years.

200 publicly-traded companies hold the vast majority of the world’s proven coal, oil and gas reserves. Those are the companies we’re asking our institutions to divest from. Our demands to these companies are simple, because they reflect the stark truth of climate science:

They need immediately to stop exploring for new hydrocarbons.

They need to stop lobbying (governments) to preserve their special breaks.

Most importantly, they need to pledge to keep 80% of their current reserves underground forever.

They argue that it is important to directly confront the fossil fuel industries at the mines, ports and power stations:

Stopping fossil fuel infrastructure projects are important. Coal plants cause asthma and dump mercury into the air and water; fracking fluid can leak into groundwater and make people sick; pipelines can leak, and so on. We can and should stand with people on the front lines of these fights to stop projects like the Keystone XL pipeline, that would destroy communities and the planet, and contribute to climate change.

But, we can’t stop global warming one pipeline, coal plant or fracking well at a time–the numbers just don’t add up. At the same time that we’re working hard to stop these destructive projects, we need to loosen the grip that coal, oil and gas companies have on our government and financial markets, so that we have a chance of living on a planet that looks something like the one we live on now. It’s time to go right at the root of the problem–the fossil fuel companies themselves–and make sure they hear us in terms they might understand, like their share price.

The obvious advantages of not actually promoting climate Armageddon by investing in the processes which will bring it to pass and instead investing in global renewable energy projects are increasingly on the radar of national governments and major funds world wide.

Kieran Cooke from the Climate News Network reports that the incoming Norwegian centre-right government headed by the Conservative Party's Erna Solberg is considering using Norway's enormous ($750 billion+) sovereign wealth fund to directly invest in the renewable energy sector. The move is supported by some of the country's biggest pension funds, religious groups and NGOs, including WWF, which wants the Norwegian fund to allocate 5 per cent of its portfolio to direct investment in renewable energy infrastructure and projects and to end its investment in coal and tar sands.

The Norwegian Government Pension Fund Global was formed in 1990 and derives its capital initially from Norway’s substantial oil and gas sector. Cooke reports that:

Several large investment funds in Europe are already investing in the renewables sector, including pension funds in Denmark and in the Netherlands. In a World Energy Outlook report earlier this year, the International Energy Agency (IEA) said there was little hope of remaining within the 2°C limit based on present levels of greenhouse gas emissions, and called for a $2 trillion renewables investment programme up to 2020. The IEA also called for a cutback on fossil fuel subsidies, which it said were six times the amount of support given to the renewables industry in 2011. Financial analysts predict that if the Norway fund invests directly in renewables, then other sovereign wealth funds around the world are likely to follow suit.

A recent study entitled "Stranded assets and the fossil fuel divestment campaign: what does divestment mean for the valuation of fossil fuel assets?" published by the Smith School of Enterprise and the Environment at the University of Oxford found:

There are a wide range of current and emerging risks that could result in ‘stranded assets’, where environmentally unsustainable assets suffer from unanticipated or premature write-offs, downward revaluations or are converted to liabilities. These risks are poorly understood and are regularly mispriced, which has resulted in a significant over-exposure to environmentally unsustainable assets throughout our financial and economic systems.

The study directly assessed the likely impacts of the 350.org campaign. Among its conclusions were the following:

Still in Europe, but with direct implications for developments in Australia, Friends of the Earth France (Les Amis de la Terre) are alert to the power of stigmatization as a tool for social change. They have nominated the giant French Bank Société Générale for a Pinocchio Award. This is given for 'Greenwash' — talking sustainability while continuing to support and profiting from the fossil fuel economy.

Société Générale ("SocGen") is one of the oldest banks in France, dating back to 1864. It offers retail and specialised financial services to 30 million customers in France and in 48 countries worldwide. In addition, it provides services to companies, investors and private clients. On SocGen's list of fossil fuel related climate crimes can be found investments in:

The Alpha Coal Project in Queensland's Galilee Basin is enormous: 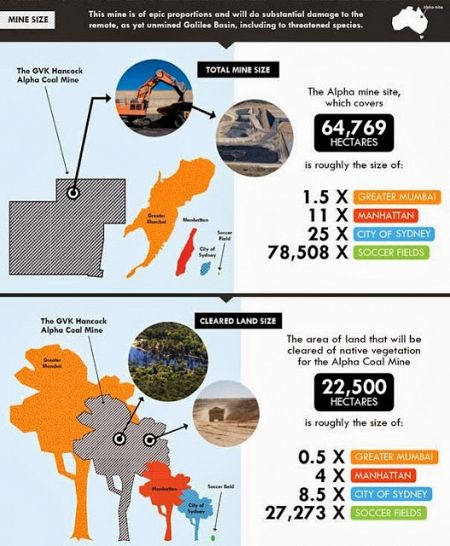 So is its potential water consumption: 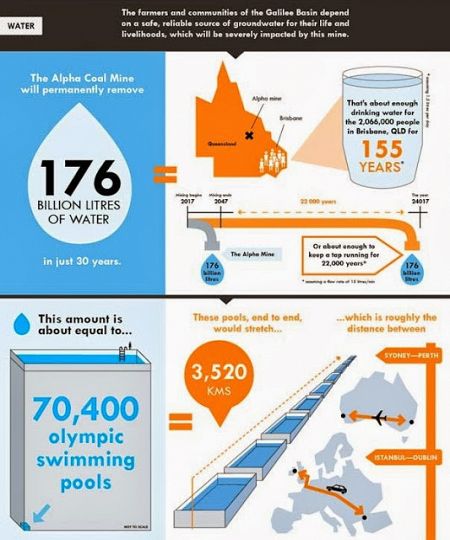 Even more alarming is the quantity of greenhouse gas emissions that would result from the combustion of the coal extracted from this one mine: 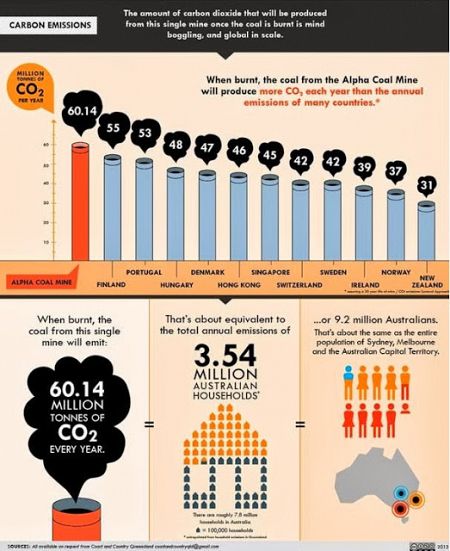 (Three illustrations above sourced from Coast and Country via Greenpeace.)

On Société Générale's involvement in the Alpha Coal Project, Les Amis de la Terre has this to say:

Société Générale is now leading feasibility and impact studies on the collection of the 11 billion euros necessary for an enormous coal mining project in Australia across from the Great Barrier Reef: Alpha Coal. The Great Barrier Reef and the multiple threatened species it houses will not be able to withstand the dangerous climate change nor the port expansion and growth of maritime transportation. UNESCO is already sounding the alarm and threatening to register this global heritage site on its list of sites in danger.

Will Société Générale abandon this project? Nothing is certain: Société Générale is especially interested in coal and its emissions! They have already contributed to more than 4 billion euros to the coal industry between 2005 and 2011, and, through their own activities, financed 634 million tonnes of CO2 in 2009, even more than Toyota!

Les Amis de la Terre is commencing a campaign targeting Société Générale for its involvement in the Alpha Coal project. On October 24, it sent an open letter signed by a wide range of environmental groups to them asking them to step down from this project. We await further developments.

Of course it is not only European Banks seeking to profit from the rush to extract and consume as much fossil fuel as possible before the door is finally slammed shut. The Big Four Australian Banks also have their snouts firmly in the trough.

Australian and overseas banks alike are contravening principles and initiatives that promote environmentally responsible investment. Several major new fossil fuel export projects are seeking to meet investment deadlines in 2013. Australians have a brief window of opportunity to intervene and prevent these projects securing the investment required to proceed.

350.org (Australia) and Market Forces are campaigning to shame the big Australian banks and other significant institutions into withdrawing existing support from the fossil fuel extraction and export industries and not making new investments.

350.org has recently conducted a series of forums in universities around Australia to highlight its fossil fuel divestment campaign. Over 750 people attended these forums, including myself at the Melbourne forum. The difficulties and possibilities of divestment campaigns were realistically set out by the various speakers, but the presentation that struck me most strongly was by Mark Zirnsak — Victorian and Tasmanian Synod Director for the Uniting Church of Australia.

The Uniting Church in Australia has an exemplary reputation for moral leadership on important social and environmental issues. Its credibility with the public is tightly linked to this aspect of its ministry. The Uniting Church of New South Wales and ACT has pledged to divest its investment funds from the fossil fuel industry, directing them into renewable energy instead.

However at the Melbourne Forum, Zirnsak's presentation reflected quite a different attitude. He focused on the difficulties associated with such a policy — conflict with church members employed by fossil fuel companies, loss of income impacting on the church's ability to operate, limited financial impact on the fossil fuel companies targeted by the campaign, action being only be symbolic and so on.

Zirnsak canvassed the possibility that fossil fuel divestment was not the only, or even necessarily the best, means for the Uniting Church to combat global warming. I found this position pretty shocking. Surely the Uniting Church, an organization heavily reliant on public perception of its moral leadership on important social issues cannot risk its credibility by continuing to profit from its investment in processes already responsible for the annual deaths of around 150,000 people, with the world's poorest people the worst affected.

The Oxford University study linked to above finds that the most significant aspect of divestment campaigns is their potential to cause reputational damage via the process of stigmatisation — that is, the loss of a social license. From the point of view of self-interest alone, the Uniting Church and all such bodies need to speak with one voice on this. The stigmatisation will not be confined to the fossil fuel merchants of death. It will also be felt those organizations whose dollars underpin their continued activities.

This article was originally published on Doug Evans’ blog Earthsign.