The game that got away

The media really thought they had their man … er … woman on Thursday, says David Horton, but they’ll just have to come back and try better next week. ON THURSDAY in Australia, we saw the media in full blown raw and uncut uncamouflaged action, as they thought they were witnessing the successful culmination of another year’s hard work in unseating a female Prime Minister. And one reason for their campaign was out in the open, thanks to the magic of twitter.

From the moment the starter’s gun (in the unpredicted form of Wiley E. Crean) went off, the journalists were in heaven. Finally, they had an actual football match … er … sorry, leadership challenge, in the flesh, to report. It was as if one of those loony tunes evangelists, after years of predicting the end of the world at dates calculated by adding random numbers from hymn books, was suddenly told that a rather large asteroid was heading straight at Earth and would be hitting in a couple of hours.

Off they went, these gangs of football hooligans … sorry … journalists (must stop doing that) to roam parliament house looking for a spot of bovver … er … sorry … looking for some solid news to illuminate the story for the public.

And sure enough, these hard-headed, experienced journalists were soon coming up with real nuggets of KFC… sorry … gold. One bumped into a couple of Rudd supporters who said their man had the numbers. Others were reporting a scorecard produced by Sky which had Gillard narrowly ahead (was it 52-38*, I forget) but with “9 undecided”, numbers which seemed to have been generated by a water diviner passing a stick over a list of caucus names. 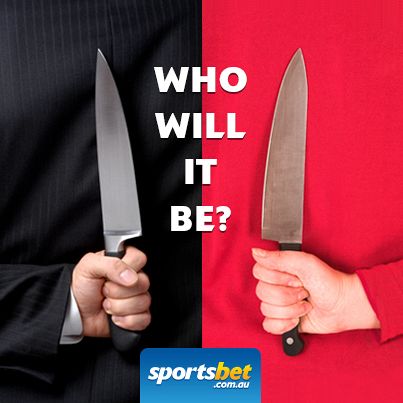 Others, seeking, perhaps much more scientific psephology, were quoting bookies’ odds. Again, I forget the exact figures, but they had Rudd as unbackable as Pharlap, and Gillard less likely to win than the Australian cricket team was to win the fourth test in India. The reporters were delighted to report that Kevin Rudd, finally arriving in parliament, was writing things down on a bit of paper. Who knew what, but, obviously, obviously, he was number-crunching, ticking off names of his supporters, water-boarding recalcitrants in the APH car park, advised to him through a Protective Services style ear piece, that another former Gillard supporter, poor deluded fool, had come in from the cold.

Still others, uninterested in the boring facts and figures, and searching for human faces to put on the number-crunching faceless men, peered breathlessly down distant corridors where, Swiss clock-like, Stephen Smith was going in this door and out another, while Anthony Albanese moved in another, as different journos reported. Another had several Gillard supporters, probably ashen-faced, in the PM’s Berlin bunker, sorry, Office. Another had “twenty” Rudd supporters in with Kevin. Great heavens, were they holding the nine undecideds hostage? Still, this “story” was rather spoilt by another intrepid reporter who managed to peep into Rudd’s office and realised that if there were 20 supporters in there they must be very small people indeed.

Anyway, after a lot of this kind of nonsense some journalists bleated, sorry, tweeted, that the Federal Police had, while surprisingly perhaps, not having kettled the journos, had blocked off their access to the PM’s office and surrounds. And so the main fun was over.

Into the chamber where the next enthralling quarter of football, sorry, politics, was to be played.

What were the team line-ups? Great heavens, the coaches were talking to the substitute players, now what? Wow, game on, great tactic from the West Abbott Albions, and totally unexpected, this’ll catch out the Red Devils, a no-confidence motion. Wait, what, oh, has to be an SSO first, um, right, dunno much about football, but whatever works. Oh look, the Red Devil subs are playing with the Albion, it’s all over for Full Forward Gillard — she’s lost. What? A technicality means she hasn’t? Boo the umpire, shouldn’t be a woman, hey, don’t know nothing about football. What? Game over? But they lost the no confidence … What? There wasn’t? Silly game.

Quick off to the change rooms, see the biffo of the second half.

What? No biffo? No contest? Red Devil wins again without even trying?

How to explain this to the public?

Who’s for the pub?

[According to Bob Ellis, who spent Thursday night with Bill Shorten and many other Labor figures, the final unofficial numbers were 60-37. You can read more by David Horton on his Watermelon Blog or follow him on Twitter @Watermelon_Man.]