The final act of the Geoff Shaw circus

Self-confessed trouble-maker, Anthony Bieniak, looks at the final act of the Geoff Shaw circus. Whilst mercifully soon to end, he warns that without more scrutiny, we may see another religious zealot take his place.

'One of Ted Baillieu's newly elected MP's, Geoff Shaw, has deeply offended a young gay man by suggesting that his desire to love who we wanted was as illegitimate as a dangerous driver wanting to speed or a child molester wanting to molest.'

And with that the lights went down. Accompanied by the peppy chromatic scales of Entrance of the Gladiators, the mad clown of the Christian right unicycled himself straight on to centre stage. Juggling bible passages and rabbiting on about how it's Adam and Eve, not Adam and Steve. The usual God Hates Fags rubbish that the rest of us abandoned long ago.

It's a morbid spectacle. Above all that, there's this one guy – the sensible one, the ringmaster pretending to be Premier – trying to walk the razor thin tightrope between religion and rationalism and politics.

You're free to think it, but for Christ's sake don't say it. Hell, especially don't write it down. And if by some failing of your faculties you write it down, definitely don't put in the post, especially not to some halfwit faggot who never liked us anyway. 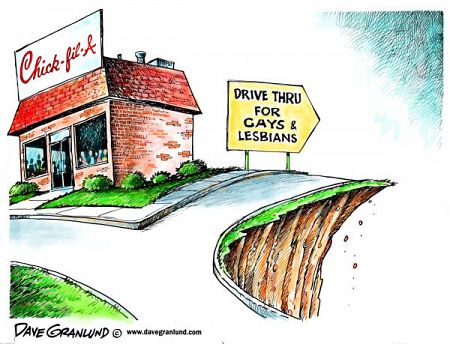 In normal circumstances, a fuck-up with this much gravitas forcing the Liberal Party to wade back into the horrid divisive waters of gay rights, with the religious institutions (and all those donations) on one side and popular opinion on the other would be enough to see you banished to the suburban obscurity whence they plucked you.

But these were not ordinary circumstances, the Liberals needed every single vote they had to remain in power, so the whole affair became act one in Geoff Shaw's Magical Undying Circus.

It has been a spectacular show — an utterly absorbing tale of loyalty and morality. The story of a man who is too batshit crazy to be saved, yet too politically important to be killed.

The second act was a Cleaver Green-esque masterpiece — the protagonist pushing and prodding at the confines of his new found immortality, holding with aplomb a position that seemed increasingly untenable. The way he seemed to roll hopelessly from one calamity to the next, defying probity and gravity, was strangely comforting.

It seemed then to be little more than a gloriously amusing sideshow — the village idiot making a mockery of the institution.

An article from The Age on Geoff Shaw's study tour of US abortion laws has disappeared from their website. #SpringSt pic.twitter.com/Ebgb2fgWpB

Hell, there's no shortage of evidence for those who want to write this off as nothing more than an unedifying jaunt into political chaos:

But such a myopic view ignores the great contradiction of Shaw. While he's more than willing to play the clown to push the envelope of disrepute, when he left the Liberal party in 2013, he was a trapeze artist.

After causing the downfall of a State Premier, Ted Baillieu, Shaw became the most powerful man in Victorian politics. Suddenly, it wasn't funny anymore.

The flip-flopping, brawling with taxi drivers and threatening to derail the entire business of governing would be hilarious if that were all it was — if he was just some lovable rogue making a satirical point about the fallibility of the Westminster system. But it's more than that.

This is where Shaw's circus takes a sinister turn.

He is still a religious zealot at heart. It was reported in late 2013 that he enlisted Premier Denis Napthine's help in proposing changes to the state's abortion laws (Napthine denied these reports).

Earlier this month he made international news with his valiant attempts to protect nascent 'tummy eggs', and this week – fresh from a partially taxpayer funded trip to the U.S. –  he labelled his former Coalition colleagues as "moral cowards" when they refused to allow him to reopen the divisive debate.

“We are quite happy to kill an egg in the tummy”, says MP confused about the difference between abortion & breakfast. http://t.co/hR6E2AIQYA

This is not the comedic work of a benign trouble maker, it’s a terrifying hostage drama that nearly succeeded in dragging from the lake that hate-fueled right-wing Christian agenda that we left behind decades ago.

This is where it gets terrifying. Shaw is no white raven. He represents a still powerful core of god-fearing 'traditional family' candidates who will, with the backing of these institutions, be standing at November's state election.

The fuckers will be in the newspapers and on the television and at your train station and your doorstep with pictures of themselves next to bold words like strong plans and positive agenda and jobs, infrastructure and opportunity. They'll look exactly like anyone else because they've done the same market research.

They sure as hell won't come out and say things like 'homosexuality is sin' or 'abortion is murder' — at least not before the polls have closed. They realise that the market has changed, it's all about stealth now.

Denis Napthine set to do Geoff Shaw two big favours - let his abortion bill be debated and vote against finding him in contempt. #SpringSt

We could have Geoff Shaw's abortion bill and a motion to expel him all in one sitting week. #SpringSt

People like Geoff Shaw win by a combination of deception and apathy. Most voters, especially in state politics, vote for the only name on that bit of paper that they recognise. All that a candidate needs to do is look reasonably like a leader and flood the town with their name and photo.

But you can, and should, ask: “what is your religious affiliation and how will this influence your policy?”  Whatever argument there was for the freedom to keep such information private went out the window when Shaw tried to force us all into a retrograde abortion debate. Whatever discrimination argument they try to use to conceal their ideology died when he used it as a haven for his misguided homophobic ranting.

The final act in Geoff Shaw's circus is mercifully upon us, but this is the kind of evil that lurks and breeds in dark places. Just as quickly as Shaw is booted from office, another brainwashed Young Christian Soldier will take his place and start spewing the same hatred. So long as we remain disaffected, too mindful of manners to enquire as to matters of deep-seated ideology, we remain vulnerable.

Let Shaw be a lesson, and let your vote be a weapon.

Note: Since the time of writing, Liberal MP Ken Smith – who has shared a rather acrimonious relationship with the Frankston MP – has announced that he will cross the floor in support of any no-confidence motions against Shaw. With Smith's support, Labor will have the numbers to pass such a motion — leading to potential expulsion of Shaw from Parliament which would leave Denis Napthine's Government without a majority. It's all getting very murky, so we'll leave the last word to the clearly aggrieved Mr. Smith:

"There is only one nuff-nuff here, and he will be judged."

The final act of the Geoff Shaw circus

31 May 2014, 7:35am Self-confessed trouble-maker, Anthony Bieniak, looks at the final act of the Geoff ...
Join the conversation
comments powered by Disqus
News updates