The U.S. election will come to be seen in years to come as having delivered the killer blow to the Republican Party, writes Bob Ellis. 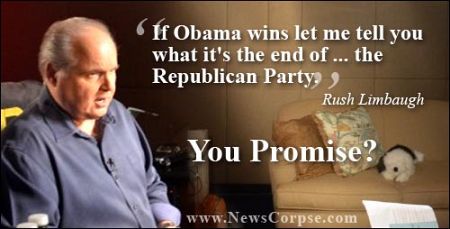 In years to come it will be agreed, I think, that this election destroyed as a political force Abe Lincoln's party, the Republicans, and a couple of things that Romney said were the death-blows to that great, sometimes idealistic, American adventure.

One was that illegal Mexicans should 'self-deport'. As stupid as saying most New Yorkers should 'go home to Israel', it meant that eighty-five per cent of the most fecund minority, the Latinos, will never vote Republican again and Florida is lost forever, and Nevada, and California, and eventually Arizona, and with them the whole electoral ball-game.

The other was that FEMA should be wound up, and its powers of rescue and salvage bequeathed, eventually, to private companies profiting from them after tornadoes, tsunamis, oil spills and superstorms. It meant no Republican President would be there for them in a catastrophic weather event and the tornado states, so long Republican, would vote the ecological-communitarian ticket, Green or Democrat, hereafter.

Lesser rogue things contributed of course, but not as much. Romney advocating that General Motors and Chrysler be allowed to go out of business. Ryan saying a raped twelve-year-old who disposed of her unwanted pregnancy should go (presumably) to gaol. Mourdock calling that pregnancy 'a gift from God', and Romney not withdrawing an ad in support of him. The Karl Rove anti-gay marriage strategy persisting long after it was clear most people have a gay sibling, cousin, or friend from school. And so on.

And the net result will be a one-party America, one more like the the one the Kennedys intended, a semi-Scandinavian social democracy; though more envenomed, now, by the self-acclaiming gangsterdom of the greedy Reagan Eighties, and the underlying bootleg Twenties undiminished before it.

That criminality will be tested in the next few weeks, as the Tea Party continue to try to refuse to increase the tax rates of billionaires in a time of national crisis, and Obamacare settles in as a way of life, and the Public Option is again discussed, and more and more Republicans hear from their constituents how out of touch with the times they have become.

America will change fundamentally by Christmas I think, and probably change for the good.

We will see how it goes, and if, at last, the audacity of hope kicks in.