The Australian Government owes a debt to the Afghan people where welcoming 20,000 additional refugees should just be the beginning, writes Dr Rashad Seedeen.

THE WORLD witnessed scenes of desperate Afghans crowding the tarmac and clinging on to planes as they departed the Kabul airport, horrifying many and triggering past traumas for scores of refugees. The rush to exit Afghanistan was precipitated by the entry of Taliban forces into the city of Kabul, securing the near-complete capture of Afghanistan from occupying U.S. forces within days of their withdrawal.

As more and more people fear for the safety of themselves and their families, a mass refugee exodus is already underway. Our Prime Minister, Scott Morrison, who has built a career around his cruelty and demonisation of refugees, has only extended the most limited of platitudes to the plight of Afghans.

Morrison and his Coalition Government have announced 3,000 humanitarian visas for Afghan refugees but that is within the already allocated 13,750 refugee annual intake. He also pointedly mentioned that he would not tolerate refugees arriving “illegally” and would not create a “product” for people smugglers returning to his reductive narrative of framing Afghan refugees as potential threats to Australian security.

His rhetoric also indicates that the Australian Immigration Department will make the humanitarian refugee vetting process as convoluted and as onerous as possible in order to dramatically limit intake. 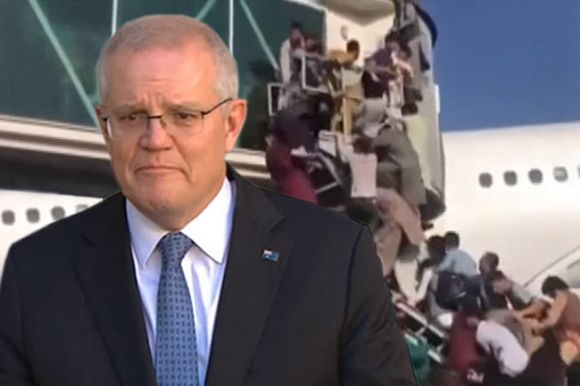 This pales in comparison to the Fraser Government’s intake of an additional 50,000 Vietnamese refugees in the 1970s and Bob Hawke’s decision of welcoming 42,000 Chinese refugees following the Tiananmen Square Massacre in 1989.

Meanwhile, UK and Canada have notably promised to take in additional 20,000 refugees each. The Morrison Government has indicated that it would not equal such a commitment. Our conservative, race-baiting Government has simply rearranged their existing refugee intake to marginally favour Afghan refugees over other asylum seekers. This Government has no bottom to sink to.

When we examine the history of Australia’s culpability in the devastation of Afghanistan in the last 20 years, we indeed should not only increase our additional refugee intake but should make every effort to internationally support the people of Afghanistan as they live under a repressive regime.

The war in Afghanistan was triggered by the 2001 September 11 terrorist attacks upon the United States. The attacks resulted in the deaths of over 3,000 U.S. civilians and a horrifying global spectacle of how terrorism can occur within the borders of the most powerful nation in the world.

The history of the war in Afghanistan has been simplified by commentators and many Western “security experts” who have argued that the 2001 intervention was justified in attempting to remove the threat of al Qaeda and disposing of a government sympathetic to global Salafi-Jihadist terrorism.

However, commentators seem to gloss over the fact that lives of Afghan and Pakistani civilians were sacrificed to carry out this failed mission. According to the Brown University Costs of War project as of April 2021, 71,000 civilians have been killed (of an overall 241,000 killed) from bombings, airstrikes, cross-fire, night raids and improvised explosive devices.

This number does not include the tens of thousands of men, women and children that have been injured, tortured and wrongfully detained. Currently, there are also 500,000 internally displaced Afghans and another 2.5 million refugees registered by the United Nations Refugee Agency.

The deaths of thousands of American civilians can never justify the wrongful killing of tens of thousands of Afghan civilians or the hundreds of thousands of deaths generally. The invasion did not reduce the expansion of global terrorism — just the opposite as we have witnessed time and time again across the world. And now, two decades later, the Taliban have returned to government.

Australia was one of the first countries to sign up to the United States’ war in Afghanistan. Prime Minister at the time, John Howard, has openly admitted that the driving factors behind such a decision were to join with the U.S. to combat terrorism and to nurture the non-binding ANZUS alliance to demonstrate Australia’s blind loyalty to U.S. war efforts despite no guarantees that the U.S. would come to Australia’s defence if the need ever arose. Such considerations do not warrant the wrongful deaths of so many Afghan civilians.

Following the invasion of Afghanistan in 2001, the Taliban were completely routed from government and what remained of the Taliban fled to sanctuaries far away from city strongholds or across the border to Pakistan.

Much has been said over the United States supporting limited reforms that have created a number of freedoms and opportunities for Afghan civilians, most notably women. Yet these praises systematically ignore how the U.S. Government funded and armed militias who committed varied human rights violations including rape, torture and extrajudicial killings of civilians.

The continued occupation of Afghanistan following the collapse of the Taliban Government saw Australian, U.S. and NATO forces working with and funding Afghan warlords and militias to carry out attacks on villages, notably in the Pashtun region. This triggered the resurgence of the Taliban with the new rank and file members coming from people disenfranchised and victimised from the war. One incident included the mass killing of 2,000 Taliban prisoners who had surrendered to a militia close to Kunduz.

Analysts have noted that the Taliban have largely been funded and supported by the Pakistan military in the last two decades. But many fail to consider that the effects of the war itself have been a key factor in recruiting fighters for the Taliban cause and building a wider support base across Afghanistan.

Australia is not exempt from committing war crimes in Afghanistan.

The Brereton Report was unequivocal in outlining a well-defined subculture within Australian Special Forces soldiers that systematically carried out indiscriminate violence, including the murder of innocent Afghan civilians. Such violence included torture and mass killing of unarmed civilians or “squirters” as the SAS called them.

“[An SAS regiment approached] two 14-year-old boys whom they decided might be Taliban sympathisers. They stopped, searched the boys and slit their throats. The rest of the Troop then had to ‘clean up the mess’, which involved bagging the bodies and throwing them into a nearby river.”

Other incidents include men and boys tortured by special forces, sometimes for days, and another where soldiers opened fire upon fleeing civilian men, women and children falsely legitimated as a “sanctioned massacre” where weapons were planted next to dead bodies.

It is unsurprising that Afghanistan armed forces and government officials openly complained over the increased cases of Australian soldiers killing civilians.

After two decades, Afghanistan has been ravaged by war on a social, political, economic and even geographical level. Australia played a key part in the complete rupture of this country.

Many activists, politicians and NGOs have declared that Australia has a moral obligation to act. Such arguments are unintelligible to a government characterised by corruption, racism and a blatant disregard for women’s rights.

A more accurate framing would be that successive Australian governments have an immeasurable debt to the Afghan people that should be honoured. At the very least, the Government should welcome 20,000 additional Afghan refugees that prioritise at-risk women, children, reformers and minority groups like the Shia Hazara people.

Furthermore, current Afghan refugees in offshore detention and temporary visa holders should be granted a pathway to permanent residency and future citizenship status as they clearly cannot return to their home country.

The Australian Government should also make every effort to lobby, fund and provide personnel in a future joint U.N. mission to Afghanistan focused on defending human rights, providing safe passage for asylum seekers and protecting at-risk groups including women, members of the LGBTIQ community and ethnic minorities like the Hazara people.

Australian civil society will have to keep pressure on the Federal Government to act as they are clearly hoping to tread water until the public’s attention moves on to the next crisis.