The Coalition Government's deficit of trust

WE COULD be forgiven for concluding the Morrison Government labours under the misapprehension that the performance of democracy entails giving every eligible body the right to vote, then doing whatever the leader wants without any shred of accountability.

It’s worth taking a quick glance at what the people at the Museum of Australian Democracy say about the political system under which we live.

Among the definitions you’ll find this radical interpretation by Dr John Hirst:

'A democracy is a society in which the citizens are sovereign and control the government.'

Well, may we bitterly laugh. Well, may we sink into cynicism. Well, may we impotently rage as we contemplate how far and fast we have travelled, under the authoritarian and theocratic hand of Scott Morrison, from the ideals and values of liberal democracy.

Democracy is complex and its most essential component is trust. Democracy cannot function, let alone flourish, without trust. Of all the qualities conspicuously absent in Australian politics today, trustworthiness is at the top of the long and profoundly disturbing list.

In December 2019, a mere six months after the Morrison Government was elected, public trust in government and institutions was found to be at an all-time low in this country and nothing has happened in the 12 months since this survey was conducted to improve the situation. Quite the opposite.

The most recent example of untrustworthiness on the part of the Morrison government is the release of the omnibus industrial relations bill on December 9. Earlier this year, ACTU boss Sally McManus formed an unlikely alliance with Industrial Relations Minister and Attorney-General Christian Porter, as they worked together to save jobs during the coronavirus pandemic.

This required an unusual level of trust, though McManus presciently cautioned that there was no guarantee it would last beyond the immediate crisis.

McManus was right on the money. After weeks of negotiations, she admitted on Wednesday to being "blindsided" by unanticipated government changes to the better off overall test (BOOT) in enterprise bargaining, which could lead to substantial pay cuts for some workers.

'Well, this idea of allowing employers for a period of two years to go and negotiate agreements that will go below what the legal minimums are was a new thing, a completely new thing. It came out of the blue and I sort of wonder whether or not it's sort of out there as ambit, because it's really actually quite extreme and there's a whole lot of other issues with this bill.'

So, yes, that one did come out of the blue.

The Government’s plan to cut workers’ take-home pay was never discussed during 150 hours of negotiation. The Government has unquestioningly acted in bad faith, as it has in so many instances since it was elected in May 2019.

Less than twelve hours after flagging these plans and after a widespread backlash, the Federal Government has backed down on these changes, for the moment.

Morrison has become renowned for theatrical press conferences in which he makes announcements. So cynical have many of us become about the Prime Minister’s announcements that come to nought and are designed to come to nought, that he is now known as "the announcement artist"  in recognition of his outstanding talent. 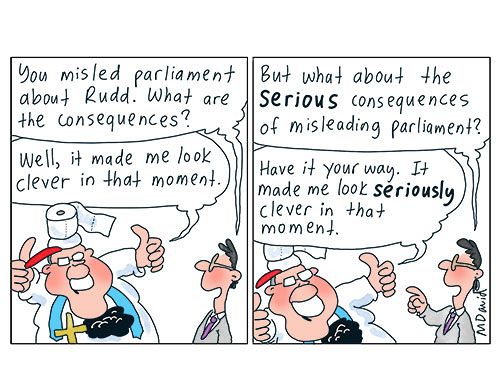 It’s worth noting that a prime minister cannot govern indefinitely by mendacity without the cooperation of a substantial section of the media.

The Morrison Government presides over an ongoing breakdown of standards and values that is previously unheard of in this country, assisted by a largely compliant media that appears to be collectively stunned like mullets by his admittedly outstanding marketing skills. However, marketing skills benefit only the marketer and are grossly ineffective as tools for successful governance, and the wellbeing of citizens.

When there is no moral compass at the top the result is a state of "normlessness", a widespread anomie in which disillusionment, disengagement, apathy, anger and a sense of powerlessness are the dominant individual and collective emotions. Lies, obfuscation and spin, the denial of responsibility at the highest level, the abandonment of the Westminster system of accountability all contribute to a pervasive sense of injustice, inequality, and abandonment of the norms that sustain society.

The result is a pervasive and crippling lack of trust.

There is no good way for this to end. It may be some small consolation that we are not alone in our dilemma: the UK and the U.S. have struggled and continue to struggle under the leadership of inadequate men whose desire for the leader’s job far outweighed their capacity to adequately fulfil the role. The consequences for both countries are catastrophic, as they will be for our own.

We cannot successfully conduct our lives on a personal or political level without trust. Nor should we be required to. Yet, here we are.