If I was a media advisor for any MP, state or federal, my advice would be to stop watching Sky and reading The Australian.

This is not because I want them to read IA ‒ although it wouldn’t hurt ‒ it is because the so-called Canberra “bubble” has morphed into a giant vacuum, of the kind that sucks up everything in its path, including any valuables.

Managing editor Dave Donovan has written about this phenomenon, which he termed a “bunker mentality”:

If you have ever been to Parliament House in Canberra, the first thing you will notice is that it is a bunker — literally built into a hill, well away from the people below. If you happen to make it into MP’s offices, you will notice that almost all of them have Rupert Murdoch’s Sky News cable television channel running in the background…

Sky is the forum right-wing politicians – and even some Labor ones, presumably suffering from some sort of weird Stockholm Syndrome – bunkered down in Canberra get many of their dumb ideas. Gain what they think is an insight into the views of “real Australians”. Get the support and re-encouragement to follow their own conservative ideological bent and move the Government even further to the Right.

Since that editorial in November last year, it would seem that this bunker mentality, propelled by the Murdoch media machine, has sucked in much of Labor and the crossbench, including the Greens. It’s a very high-powered vacuum, indeed, with the result that our Parliament has now pretty much gone rogue. Not in terms of installing a military coup and murdering their opponents, but in the sense that they now appear deaf, dumb and blind to the needs of their citizens.

SMOKE ON THE BRAIN

In short, our democratically elected leaders are just not listening or seeing the facts right in front of their eyes — even when the facts invade their nostrils and clog their breathing passages. At no time has this been clearer than in this smoke-filled week.

"You can smell the smoke, you can taste it and you can feel it"

Sydney is 'choking' on thick smoke from Australia's bushfires

With most of NSW and great swathes of Australia literally burning out of control, the effects of the fires now threatening water supply, and air quality so compromised that people are advised to stay indoors, our Prime Minister stood in a haze of smoke, oblivious to the calamity engulfing the nation, to hold a presser in Sydney. Squinting – presumably not because of the smoke haze – he did not address the state of emergency in his own nation. In his own State, for heaven’s sake!

This is surprising not only because four people have already died, hundreds of homes have been destroyed, thousands of hectares of bushland have burned to a crisp and wildlife has been completely wiped out ‒ including an estimated 2,000 koalas ‒ but because the smoke also engulfed the SCG, disrupting play, and we all know how important sport is to the PM.

No, the Prime Minister of Australia made no mention of bushfires, discussing only the New Zealand volcanic explosion, which has tragically claimed five lives so far and is, of course, shocking.

However, is it more shocking than Australia’s unfolding disaster simply because it happened overseas? Is it more shocking than a PM who stands by, saying not a word to the families still dealing with this crisis on a daily basis? A leader of a nation, who is so completely insensitive to the suffering of his own people, he rejects calls for further assistance for firefighters, who are struggling under the pressure and reportedly crowdfunding for food and water?

Or is it simply because there is no expectation for Morrison to do anything about a disaster on foreign soil? Hell, it may even provide a distraction in which his empty platitudes and "thoughts and prayers" may help him appear sympathetic towards the New Zealand plight.

In a later press conference, the Prime Minister also studiously avoided mentioning the billowing smoke choking Sydney and Canberra, instead, standing beside his undertaker-like Attorney-General to discuss a new Government bill on “religious freedom”. Hell’s bells! 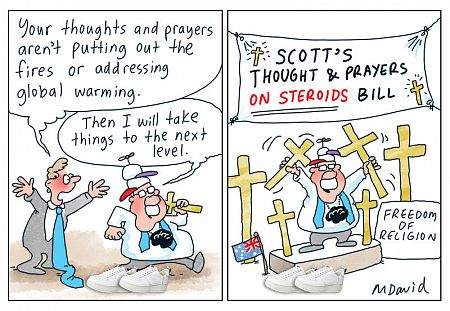 As Dr Jennifer Wilson wrote in IA on Monday (9 December), NSW Premier Gladys Berejiklian, who is overseeing the most destructive bushfire in NSW history, likewise did not provide any practical help or even discuss the issue. No, since “now is not the time” to discuss the cause of the disaster, Gladys went off to open a zoo. Of course, this may prove handy for housing any wildlife that may have escaped the fires and over-development, once the species extinction under her watch is complete.

Maybe a little less watching Sky and a little more attention to their constituents might help.

This is only half the story! Read the rest of this editorial in the IA members-only area. It takes less a minute to subscribe to IA and will cost you as little as $5 a month, or $50 a year — a paltry sum for superb journalism and a host of extras.

Ex-fire chiefs with decades of experience are warning that we aren’t prepared to face the bushfires and extreme weather events forecast for this summer. What will it take before Scott Morrison makes sure the country is prepared? pic.twitter.com/2cPE8hpFsv