OPEN EDITORIAL: The Canberra divide and the power paradox

Two events over the past week bespeak the chasm between the political class and the public.

The first was Barnaby Joyce telling Fairfax there was a “grey area” about the paternity of his live-in lover Vikki Campion’s unborn baby. Most people have been dumbfounded that anyone could so disrespect their partner as to call into question their fidelity in the national press. And then tell the media the next day the subject was “nobody’s business”. Many Australians must now be asking about Joyce: Is he fkd in the head? Because normal people just don’t act that way.

The second was new ABC 7.30 national political editor Laura Tingle saying this week there was “no conflict of interest” in her accepting $15,000 for two days work for Prime Minister Malcolm Turnbull’s department. Again, most people would see an obvious conflict of interest between accepting money from the primary politician you are tasked to hold to account. Most people understand that the one who pays the piper calls the tune.

That Joyce and Tingle can act like this is not all that surprising, really. It is just another symptom of the Canberra divide — the vast gulf that separates Federal politicians and “insiders” from the “great unwashed”. A dislocation in thinking and behaviour that has profound and deleterious implications for the way we are governed.

One reason for the gap may lie in how isolated Parliament House is from the people. Set on a hill, miles away from the Canberra CBD and even further from the suburbs, it is a long approach on foot. And to call it a “House” is a misnomer ‒ unless you happen to be a hobbit ‒ as it is not a building per se, but a bunker, embedded into Capital Hill. Inside, politicians and the gaggle of journalists that waddle after them all day, are scrupulously separated from the public by stringent security. Now there is even an ugly fence outside to keep the plebs at a safe distance.

So, our politicians ‒ and the people paid to report upon them ‒ are physically removed from the public. This fosters a sense of entitlement and elitism — especially when combined with that heady mix of power, fame, high incomes and constant ego-stroking from lobbyists, juniors and apparatchiks. Power is said to be an aphrodisiac, so little wonder Parliament is such a sex-charged Babylon.

Ordinary everyday people, in regular jobs, living in suburban houses or small country towns, have little to compare with that way of life. Which is one reason why the politicians and their favourite journalists have different priorities and concerns than we on the fringes; why they find it hard fathom the way we think.

But there is another reason — a medical condition. It’s called hubris syndrome. In short, power causes brain damage. And the longer one is in contact with power, the more damage it does.

The following is the beginning of a fascinating article published late last year in The Atlantic:

If power were a prescription drug, it would come with a long list of known side effects. It can intoxicate. It can corrupt. It can even make Henry Kissinger believe that he’s sexually magnetic. But can it cause brain damage?

When various lawmakers lit into John Stumpf at a congressional hearing last fall, each seemed to find a fresh way to flay the now-former CEO of Wells Fargo for failing to stop some 5,000 employees from setting up phony accounts for customers. But it was Stumpf’s performance that stood out. Here was a man who had risen to the top of the world’s most valuable bank, yet he seemed utterly unable to read a room. Although he apologized, he didn’t appear chastened or remorseful. Nor did he seem defiant or smug or even insincere. He looked disoriented, like a jet-lagged space traveller just arrived from Planet Stumpf, where deference to him is a natural law and 5,000 a commendably small number. Even the most direct barbs—“You have got to be kidding me” (Sean Duffy of Wisconsin); “I can’t believe some of what I’m hearing here” (Gregory Meeks of New York)—failed to shake him awake.

John Stumpf sounds a lot like Barnaby Joyce — off on his own planet, insensitive and unapologetic.

Tamworth: @Barnaby_Joyce has ended his own media conference as quickly as it started. "Anything that is personal in nature, is nobody else's business but mine and Vikki's." #auspol #7News pic.twitter.com/vMnP8RQ2N8

The historian Henry Adams was being metaphorical, not medical, when he described power as “a sort of tumor that ends by killing the victim’s sympathies.” But that’s not far from where Dacher Keltner, a psychology professor at UC Berkeley, ended up after years of lab and field experiments. Subjects under the influence of power, he found in studies spanning two decades, acted as if they had suffered a traumatic brain injury—becoming more impulsive, less risk-aware, and, crucially, less adept at seeing things from other people’s point of view.

Sukhvinder Obhi, a neuroscientist at McMaster University, in Ontario, recently described something similar. Unlike Keltner, who studies behaviours, Obhi studies brains. And when he put the heads of the powerful and the not-so-powerful under a transcranial-magnetic-stimulation machine, he found that power, in fact, impairs a specific neural process, “mirroring,” that may be a cornerstone of empathy. Which gives a neurological basis to what Keltner has termed the “power paradox”: Once we have power, we lose some of the capacities we needed to gain it in the first place.

So, power has an actual physiological effect on the brain, such that the longer one holds onto it, the more alienated from ordinary people you become. It is why politicians need market research and polling to work out what regular people think — what should be instinctive. Why Malcolm Turnbull continues his inexorable slide towards 30 Newspolls in a row — and oblivion.

People like Tingle, who have supped with power for decades and hold a weighty and privileged position in the shrinking pantheon of Australia’s press, undoubtedly suffer the same affliction. The longer you are in the Press Gallery and the more venerated you are, the more isolated from reality you become. You only need to see the bitter reaction from veteran Press Gallery reporters to even the faintest hint of criticism to see these “insiders” feel barely a morsel of respect for those outside their circle.

Bt, the person you just insulted is Dr Jennifer Wilson, a paid columnist for @independentaus - a publication that, unlike News Corp, informed its readers about the Barnaby Joyce affair and staffer pregnancy BEFORE the December 2017 by-election. Maybe an apology? @noplaceforsheep

It is also why they repeatedly misread important events — like the public reaction to Julia Gillard’s Misogyny Speech and the 2015 Budget. Why they fail to correctly call election results time after time. And why, every few weeks, they confidently announce that Malcolm Turnbull has turned the corner and is on his way back to winning the nation’s hearts.

They have no idea — but it’s not their fault. They just have hubris syndrome.

But it does mean we are being governed by people intoxicated by their own power and self-importance. By people who don’t care about us much at all.

It also suggests the people meant to report on politicians on our behalf are suffering from the same delusional personality disorder.

It’s no wonder the country is in such a mess. The people who are running it ‒ and reporting on it ‒ are fkd in the head.

This story was originally published as part of the Independent Australia weekly subscribers' newsletter, which usually only available online in the IA members only area. It takes less a minute to subscribe to IA and costs as little as $5 a month, or $50 a year — a tiny sum for quality journalism and many other great extras! 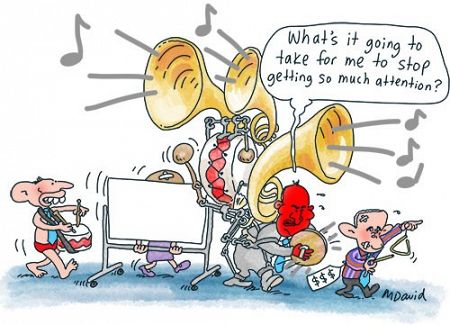 May as well get paid for what you have been doing unofficially for some time.