The longer Tony Abbott is in the PM’s seat, the more frightening it is how little he knows about Australia — and it’s not as though there’s a suitable replacement, repines senior correspondent, Barry Everingham.

ON SUNDAY morning’s crack current affairs program, ABC's Insiders, the cold, stitched-up Gerard Henderson took Malcolm Fraser to task for daring to comment that Tony Abbott’s Christianity was aired for a an hour on Sundays.

Henderson accused Fraser of raising the spectre of bigotry by referring to Abbott’s Catholicism, which, of course, is typical Henderson hogwash.

Gerard Henderson never smiles which gives food for thought that perhaps as a child he took delight in pulling wings off flies.

Abbott and the dreadful Scott Morrison, both Bible bashers, have reigned over the brutal treatment of asylum seekers, one murdered and the second dying in very suspicious circumstances.

Both on their watch.

Morrison, of course, was holier than thou in his response and the following was incredible even for a misfit like him.

Where does this guy get off?

"In the offshore detention centres, International Health and Mental Services do an outstanding job.”

Tell that to the Marines, Scott.

'... one of the world’s most hated Prime Ministers.'

How Australia’s Tony Abbott became one of the world’s most unpopular prime ministers http://t.co/IB3y3NS87R http://t.co/qm3Z4iVoIV

Take the introduction of the Imperial Knights and Dames titles — we became a laughing stock.

Then in London, he came up with a beauty — Scottish Independence would give succour to enemies of justice and freedom!

He then went on about “beheadings”.

This Englishman, who leads our country, has obviously forgotten, or really didn’t know, that several Aboriginal people have been trying to get the heads of their of their ancestors returned to Australia for traditional burial.

Along with his canard that the arrival of the First Fleet was the ‘defining moment’ when we became part of the modern world and the absolute crap of ‘Team Australia’ gives reason to wonder if this Prime Minister is really up to the job in hand. 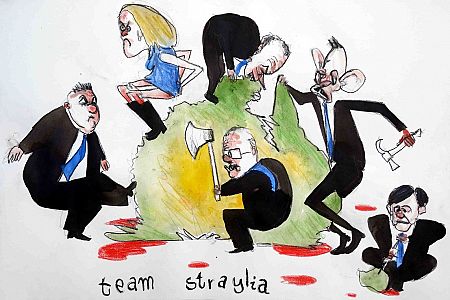 (By John Graham. Buy the original from the IA store.)

And in the past few weeks, the moderate dogs of the Liberal Party haven’t actually been barking, but there's been plenty of growling about their leader.

But the dilemma becomes obvious when the names of ‘suitable replacements’ come up.

Now Bishop might be skating on thin ice. As the only woman in the Liberal Party that Abbott found suitable to hold a senior ministry, she might attract the same venom from the extreme right that we saw heaped on Julia Gillard.

Is this really the kind of party we need running this country?

Is Tony Abbott the kind of man we need in charge of that party? 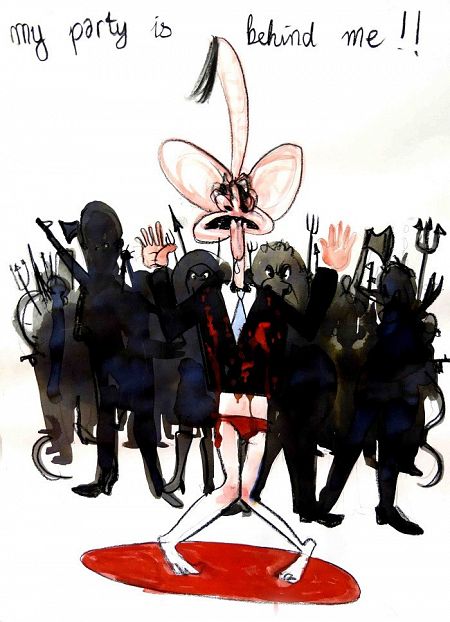