In a speech at the Ashbygate book launch on Thursday (10/12/15) in Caloundra, managing editor David Donovan explains how it all came to be.

INDEPENDENT AUSTRALIA would like to acknowledge the traditional owners of the land upon which we stand, the Gubbi Gubbi people. We would like to also pay our respects to their elders, past and present, and the elders from any other communities who may be here today.

I would also like to welcome everyone else here today for the launch of Ashbygate: The Plot to Destroy Australia’s Speaker, by my friend and colleague, Sydney bureau chief Ross Jones.

The timing of this book launch could not really have happened at a better time — well, except perhaps if Mal Brough had been arrested by the AFP in front of a host of television cameras during an address to the national press club by Bill Shorten. The paperback version came off the presses in October and the eBook versions only became available a couple of weeks ago.

Around the same time, indeed, as a workboots and bright lemon shorts wearing James Ashby had police traipsing through his parents’ rural abode a few miles from here at Beerwah. And then, of course, we have seen QC Mark Dreyfus fix his steely gaze upon an increasingly sweaty, hangdog looking Mal Brough in Parliamentary Question Time. I think it is obvious to all that the end of Parliamentary sitting could not have come at a better time for that Special Minister.

So the timing has been impeccable for us. But of course, books like this don’t emerge overnight. This book has, really, been over four years in the making.

Independent Australia has a dedicated Ashbygate page, where we collect all our stories on this topic. With one written by Ross going up this morning, there are now 149 stories on that page. The first one, written just over four years ago, on 28th of November 2011, four days after Slipper “ratted” on the Libs – as News Ltd famously illustrated graphically on their front page – was called ‘Callous hypocrisy installs Slipper as Speaker’ and was written by myself. This story, incidentally, also features in the book, being discussed by Ashby and Slipper in a text message exchange.

It detailed the insults the Libs had heaped on Peter Slipper before he resigned from the Liberal Party to become Speaker in the Gillard Government, thereby shoring up her numbers.

Tacky but unsurprising. Remember when @dailytelegraph ran these front pages of (then) Speaker Peter Slipper as a rat? pic.twitter.com/7KfBHkhD

It included a quote by Independent MP Tony Windsor:

Tony Windsor found it difficult to keep a straight face at a press conference held after hearing the news that Slipper had defected.

He described the brutal treatment the Libs had meted on Slipper:

"What has really surprised me ... is this enormous campaign to eradicate him so that Mal Brough can get back in..."Mr Windsor said.

"They kicked this guy to death and then wonder why he dies ... extraordinary."

The brutal treatment was just a mild precursor to what was to come.

The next story on the Ashbygate page was from 24 April 2012, just after James Ashby made his complaint to the Federal Court and News Ltd started simultaneously publishing the most salacious details — almost as if they knew all about it well beforehand.

It was written by another Jones – University of Western Sydney historian Dr Benjamin Thomas Jones – who presciently said the following early in the piece:

‘Far from a single event or controversy, a collection of skeletons from the Liberal turncoat’s closet dating back to the days of the Howard government have seemingly all come to light at once. With Julia Gillard’s minority government already beleaguered by scandals, leadership uncertainty and consistently poor polling, the timing of this latest allegation could not be more suspicious. In the Machiavellian world of federal politics, coincidence is an unknown word. The criminal and civil charges against Slipper are serious and he was right to stand down as Speaker, but the reactionism, opportunism and presumption of guilt displayed by virtually the entire House of Representatives indicates a low point in an age of political minnows.’

The Liberal Party dirt file was out on Slipper and, with the Party needing just a single vote to gain power at that time, they were hawking it around to anyone who was interested. They were also, if you remember, conducting a simultaneous operation against Craig Thomson. Neither Slipper nor Thomson were blameless, perfect individuals, but I think it is fair to say that neither’s sins or alleged crimes warranted the attention or opprobrium they received. The media attention and public vilification of both these two men continues to this very day ‒ despite them being cleared of all or virtually all of the charges against them. Neither will ever lead a normal life again.

The Liberals needed one seat to gain office. It is my opinion they would have been quite unconcerned if they had gained by one of these men harming themselves — or worse. It didn’t take a genius to see what was happening. I think most people ‒ despite us predictably being called “conspiracy theorists” by News Ltd and some Liberal politicians at the time – could see what was happening here. However, it was only Independent Australia that stuck with the story from the beginning and continued to expose what was going on — through my own writings and those of, among others, Dr Ben Jones, former UK policeman Vince O’Grady, former Fairfax reporter Margo Kingston, legal expert Joan Evatt, the late Brock Turner and, of course, the great Ross Jones.

Ross arrived on the scene as a contributor to IA in February 2013. That was soon after Rares had provided powerful vindication through his judgement of almost exactly three years ago – 12 December 2012, which announced that James Ashby, Karen Doane and Mal Brough were in a “combination”  against Peter Slipper with the aim of advancing the interests of themselves and the Liberal Party.

So much for being conspiracy theorists. A great many ordinary Australians were seething after this judgement and so, on the suggestion of my friend and contributor Brock Turner, a quadriplegic who died in a tragic accident recently, IA set up a novel crowdfunding initiative to get to the bottom of the affair. We raised about $50,000 through a democratic unit Trust – called the Ashbygate Trust, in which get to vote on how the money is spent and is made up of, at last count, 438 concerned regular Australians. It is these everyday men and women who have enabled this book to become a reality. I would like to thank, most emphatically, each and every one of them.

Of course, the man who has raised this book and given life to it is Ross Jones. A licensed private enquiry agent and former publisher himself, Ross picked up where the amateurs left off and has now told a tale of stunning detail and meticulous research. He has spent more time than he probably every imagined driving around the hamlets and foothills of this community interviewing a host of people and trawling through more court documents, texts and affidavits than any man should ever have to do. It has been a massive work to put the book together, taking about two years from when he started writing it, but the result is a piece of Australian history that cannot be ignored.

It is not a novel, but it has many of the characteristics. It is a great read. A page turner. It involves, sex, conspiracy, intrigue, dirty tricks and a great deal of greed. It shows, in impeccable detail, the lengths people will be prepared to go to gain power in this country. Even to the extent of crushing their opponents utterly. It is not pretty, but it needed to be told and Ross tells it most brilliantly.

The difference between it and a novel is that, as difficult as some of it is to believe, it is all true. We made sure of that.

So, without further ado, I would like to welcome brilliant author and my friend, Ross Jones, to the dais to speak about his and IA’s new book: Ashbygate: The Plot to Destroy Australia’s Speaker.

You can follow Dave Donovan on Twitter @davrosz.  Find out more about the Ashbygate book by clicking HERE. 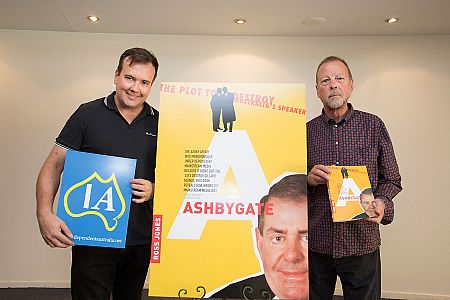 Get to the truth early. Subscribe to IA for just $5.