A non-religious celebration of the life of Ashbygate Trust creator Brock Turner was held at the Southport Golf Club yesterday (Saturday 18/7/15), at which managing editor David Donovan gave the following eulogy.

SINCE BROCK passed away last week, it has been very telling listening to the many different stories people have to tell about the Brock they knew.

He was a complicated and interesting man. One who lived a different sort of life than most of us here know or will ever experience.

I met Brock Turner only about three years ago. I have been asked to speak today because I know a side of Brock’s life that many of you here may not know much about. That is, Brock’s online persona and presence — which was, for those who were not aware, remarkable, unique and highly influential.

I am also speaking on behalf of the great many people who knew Brock through social media – especially Twitter – and through his revolutionary work establishing the Ashbygate Trust.

I first came across Brock on Twitter in 2012. As editor of popular online news journal Independent Australia, I use Twitter largely to get our stories out to the public and interact with our readers. Brock was one who interacted. His tweets were notably humorous and sharp, and cut right to the heart of the matter.

To give you some idea what I mean, in case you aren’t familiar with Brock’s Twitter work, here's one from last month:

It's the duplicity that galls me, if you want a racist, homophobic, coal powered tyranny at least have the guts to say it #auspol

He had a way with words.

Brock tweeted under the tag @Turlow1, under the name “Geezlouise”. His profile picture being Vermeer’s Girl with Pearl Earrring, sitting at a computer in an audio headset.

I wasn’t the only one. Even with the media attention Brock received through his work with Ashbygate, in the huge and very moving touching outpouring of emotion this week and last after the sad news went out about Brock’s passing, a great many people still thought “Geezlouise” was a “she”. It was because Brock simply never talked about himself on Twitter — only issues and ideas.

Brock was not one for trivia and trifles.

Certainly it would never have entered most people’s heads that he might be disabled. The Brock we knew on Twitter cared about society and other people ‒ who you really were ‒ not your age, or gender, or race, or religion, or how much you earnt, or what you wore, or what you looked like, or whether you walked or wheeled.

He loved people, just as they were. And people loved him for who he was.

Another online friend of Brock’s, Noely Neate, wrote a touching story last week about Brock, which talked about just this.

On the surface, all we knew about Geezlouise was that he

'Likes living through change. Doesn't like liars or secrecy.' Lived in Queensland and joined Twitter in May 2012.

Anyone who actually followed and interacted with Geezlouise knew much more than that. They knew he was passionate about bullshit slogans, they knew he liked a good "discussion" – sometimes rather heated – and he liked to question the politics of the day.

Brock’s real life circumstances were never a focus on Twitter. His interactions were never viewed in the prism of his physical limitation….

For mine, Brock actually typified what can be great about Twitter. Just because you can’t physically get on the dance floor and strut your stuff, doesn’t mean you can’t join the party and make an impact.

Social media let Brock escape any physical limitations he may have had and make an impact. In fact, he made a massive impact.

In late 2012, I finally met Brock in person in a meeting at the famous Northcliffe Surf Club. Only later did Brock let me know Geezlouise and him were one and the same. We became good friends in the real world. It helped that we were both disillusioned by the state of Australian democracy and the mainstream media, and we weren’t going to take it any more.

He wrote about why he decided to do something about in one of the stories he wrote for IA, in July 2013, soon after we set up the Ashbygate Trust:

Brock was also a contributor to IA. Here's one of his finest: 'Why people gave $50,000 for Ashbygate investigation' https://t.co/UhItkXtvU6

The journey proper started about a year and a half ago, when I had intimate firsthand knowledge of an issue that became something of a media plaything. I got to see how truth and balance were not just sacrificed but deliberately ignored to give preference to a narrative and agenda that suited preconceived prejudice and vested interests.

Having had this firsthand experience, and understanding that this particular issue was not an exceptional circumstance – that my family, the business and I were not so special as to receive an extraordinary treatment – I concluded that this kind of thing must be happening to others.

I am no activist; I have never carried a banner in my life. However, when you become aware of a situation that is so irretrievably broken and causing such corrosive damage to the society in which you live it takes a kind of a morally corrupt and selfishly mercenary personality, the type I unfortunately do not have, to sit idly by and watch it affecting everybody around you.

I would much rather spend my days in ignorant bliss sitting in the sunshine on my back verandah watching mother nature quietly ply her humble trade, but at some point in everyone’s life you come to that moment when you realise your choice is to become part of the problem or part of the solution. With a weary and cynical heart I found myself unable to continue sitting idly by.

It was Brock’s idea to establish the Ashbygate Trust, which enabled us to raise $50,000 in about two weeks to investigate the political conspiracy to bring down the former Government. It was revolutionary and gained widespread attention because it was a completely new form of crowdfunding. Each donor, instead of just giving their money away and hoping for the best, became a voting member of the Trust, with the democratic power to determine how the money was spent.

Brock believed in empowering people. Ordinary everyday people. Not the wealthy, or the entitled, or the born to rule. Good-hearted people — people just like himself.

Sorry to hear that @Turlow1, who I interviewed in 2013, has died. Thoughts with his family & friends. http://t.co/Rx5lAfh53Q @davrosz

Here’s what Jonathan Swan wrote in the Sydney Morning Herald about the Trust’s beginnings:

Over the past several months, these activists have started a fund called the Ashbygate Trust, which has already raised more than $50,000. They have recruited two lawyers and a private detective to join a team of three ''citizen journalists'' and hundreds of other tipsters pursuing Ashbygate.

Fairfax Media has seen a bank statement for the Ashbygate Trust and read some of the emails sent from donors. The pledges, which range from $20 to $2000, have been coming from everywhere. The average donation is about $120.

''I'm getting lawyers, doctors, retirees, tradesmen, graphic designers, old people, young people, people from I believe every state and territory,'' says Brock Turner, the man who came up with the idea for the Ashbygate Trust.

''Old hippies saying I haven't felt this empowered since the 60s.''

Brock loved truth and justice, and he loved people — and people loved him. 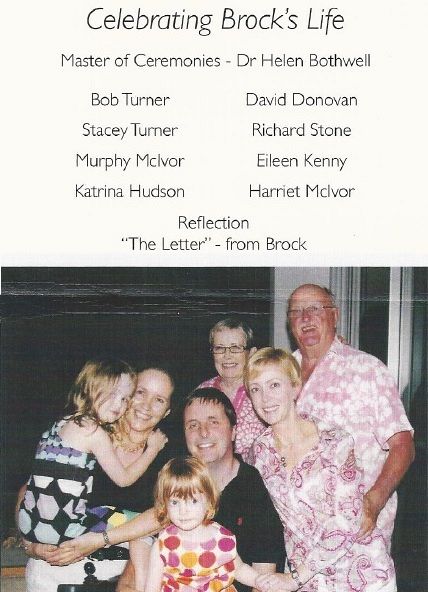 The Trust’s final report is being released next month as a paperback book — something I suspect will make several sitting MPs rather nervous and uncomfortable. Brock never got to see this book fully come to fruition, but he did get to read it before the end.

It is sad that Brock has been taken from us, as I know he had many other plans and ideas he was working on, such as starting work at Independent Australia later this year.

It is sad, of course, for his family and for Eileen, and judging from the literally hundreds of heartfelt messages and emails I have been receiving asking for me to pass on their condolences to Eileen and Brock’s family, a great many others also keenly feel the cruel sting of Brock’s passing.

But in this sadness, we should also take heart by the impact he has had from his remarkable life. By the inspiration he has given to so many and by the example this courageous person has set others.

Rest in peace, Brock Turner. You will be greatly missed.

The truth is a disruptive technology. Let's use it #auspol #corruption