The Misogyny Speech may be trending but what has really changed ten years on? Managing editor Michelle Pini takes a look at gender bias in 2022.

It was an empowering moment for women everywhere and became hailed as a turning point in gender equality, with Gillard’s words still being printed on coffee mugs and going viral on social media, even today.

Gillard’s speech, directed as it was in response to a motion by then-Opposition Leader and overt misogynist, Tony Abbott, also brought home the many ways in which the misogynist, like most bullies, attempts to manipulate the narrative to create a false equivalence and even to portray themselves as the victim.

The Leader of the Opposition says that people who hold sexist views and who are misogynists are not appropriate for high office.

Well, I hope the Leader of the Opposition has got a piece of paper and he is writing out his resignation. Because if he wants to know what misogyny looks like in modern Australia, he doesn't need a motion in the House of Representatives, he needs a mirror. That's what he needs.

When Gillard retaliated, venting the white-hot anger and frustration she had experienced – shared by many women around Australia and, indeed, the world – all Australians should have felt profound humiliation that we had an opposition leader like Abbott in our parliament. A misogynist that incited crowds to “ditch the witch!" and declared in parliament that it was "another day of shame for a government which should already have died of shame".

This latter appropriation by Abbott of shock jock Alan Jones’ comment suggesting Gillard’s recently deceased father had “died of shame”, should have been enough for all of us to be disgusted and shamed enough to boot him out of parliament.

But after Gillard’s speech put Abbott on the world map, women everywhere were incredulous when he was elected PM at the next election, anyway.

And it is important to note that even the female journos within our mainstream media failed to appreciate the truth in her words at the time. Nor did they hang their heads in shame or even exhibit compassion for the truly abhorrent sexist treatment aimed at our first female Prime Minister – day after day. They allowed the abuse to continue — some even choosing to pile on along with Abbott until Gillard was chased out of government, pitchfork-style.

So much for gender equality.

And Abbott's subsequent misogyny as PM did not abate, reminding us all why he evoked such anger in Gillard in the first place with choice comments such as, “What the housewives of Australia need to understand as they do the ironing”, “I’m not sexist, I’ve got daughters" or referring to netballers as a “sexy bunch”, before appointing himself Minister for Women.

For, as we have called out on IA, Abbott's blatant misogyny was on terrifying display well before he became PM, such as when he punched the wall near a female barrister with whom he had a disagreement. 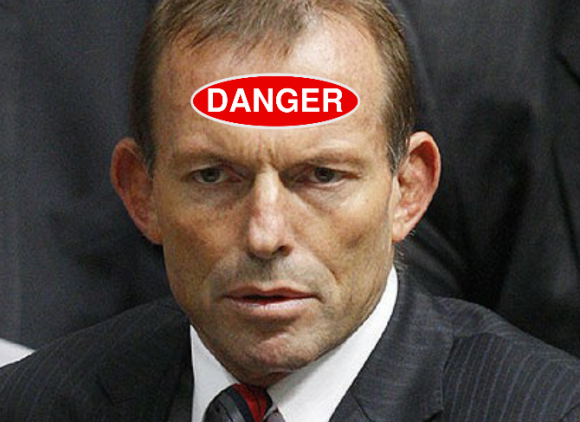 Tony Abbott: university bigot and bully — and still one today

A leading barrister has confirmed Barbara Ramjan's claim about Tony Abbott's violence, aggression and intimidation of her at Sydney University. What it doesn't report is that Abbott's misogyny bigotry and bullying has continued to the current day.

Interestingly, it was only after Gillard’s speech captured the world's attention via social media that Australia’s legacy media could no longer ignore its power. Today, it seems rather hypocritical, to say the least, that after helping to evict Gillard and elect Abbott, so many suddenly appear enamoured with the Misogyny Speech.

So ten years on, what has actually changed?

NOT THE FALSE EQUIVALENCE

Which brings us to today and though this particular Gillard moment in history is in the spotlight once again, our news feeds are still littered with tales about the imaginary plight of privileged men.

Such as this call to action from Mike O’Connor in the Herald Sun, who asks, 'Who will defend the White Christian male?'

And aggrieved commentator Steve Price, who has been harping on about being “old," "male" and “cancelled”, despite having a newspaper column, a radio show, regular gigs on The Project and countless appearances all over establishment media. Of course, while complaining of being “cancelled”, Price still managed to disparage women’s sport as “substandard” from his seemingly ever-privileged, still uncancelled soapbox.

NO CHANGE IN COALITION MISOGYNY

After a brief stint with the more egalitarian Malcolm Turnbull, at least in relation to Abbott, we had Scott Morrison. Morrison refused to meet women protesting domestic violence, instead firing veiled threats of meeting them with bullets. ScoMo cried as he declared himself non-sexist because his wife, daughters and mother were the “centre of [his] life”, before steadfastly ignoring "women’s issues” — such as the rape in Parliament House of Brittany Higgins and the allegations of rape against his Attorney-General, Christian Porter.

NOR THE GENDER PAY GAP

Ten years on from Gillard's speech, and after almost ten years of Coalition rule, the gender pay gap sits at a whopping 14.1 per cent.

And, as a new Treasury report has found:

'The arrival of children creates a large and persistent increase in the gender earnings gap. Women’s earnings are reduced by an average of 55 per cent in the first five years of parenthood.'

OR DOMESTIC VIOLENCE AGAINST WOMEN

One woman is still murdered by their partner each week in Australia and the other key statistics on violence against women in Australia, as summarised by Our Watch, remain a terrifying read.

The treatment of former Liberal Party staffer Brittany Higgins, who was raped in Parliament House was abysmal from the outset. And today, the trial of her alleged rapist, Bruce Lehmann, appears focused on the victim and what she was wearing, how drunk she was and so on. The salacious aspects of the trial as well as Higgins' face, rather than Lehmann's, are also plastered all over the media.

But just as we don't blame murder victims as somehow deserving of murder, there are no mitigating factors for rape, as this excellent tweet sums up:

I agree that Bruce Lehrmann is innocent until proven guilty. What I object to is the focus on Higgins' drunk conduct, implying that if she did get raped she's somehow responsible for it. By law, there's no mitigating factor in the culpability of a rapist; rape is rape...

Ten years on from the Misogyny Speech and after almost ten excruciating years of Coalition neglect on every key area of gender equality, the media cheer squad should hang their heads in shame. Because they not only ignored the blatantly misogynistic treatment of our first female prime minister but actively joined in and enabled the most misogynistic government in recent Australian history.

Today, these media representatives (mostly) laud Gillard's speech as though they had always done so. But in fact, at the time, many accused her of orchestrating it to deflect attention from the (trumped up) controversy engulfing her Government.

But it is not hard to believe Julia Gillard when she says the speech just happened.

People were yelling out good lines and I was weaving them into the speech, particularly that mirror line was yelled by a few people behind me and I’m like, 'That’s really good, okay here goes!'

I agree that Bruce Lehrmann is innocent until proven guilty. What I object to is the focus on Higgins' drunk conduct, implying that if she DID get raped she's somehow responsible for it. By law, there's no mitigating factor in the culpability of a rapist; rape is rape. 1/2

The newly elected Albanese Government has a higher ratio of women to men in Cabinet — this is a very progressive step forward.

There are also positive moves ahead in key areas, such as reduced childcare costs and the introduction of universal paid leave for family and domestic violence.

Ten years on from Julia Gillard's empowering speech, after almost ten years of Coalition neglect, with a new Albanese Labor Government perhaps equality is finally in the air.