Following the Four Corners exposé on the Murray-Darling Basin, executive editor Michelle Pini interviews two of the program's key experts who are scathing about the Government's management of the Basin Plan.

WAY BACK IN JUNE 2017, IA published an investigative report written by Mark Zanker, titled, 'The Murray-Darling Basin: Water, markets and money'. The report indicated exorbitant overpayments for water buybacks in Tandou and Menindee.

Following its publication, we were swiftly reprimanded by the Department of Agriculture. We were asked to remove the article, which was deemed to be “inaccurate”. However, after repeated requests, the Department did not provide any “accurate” documentation – or, in fact, documentation of any kind – to refute Mark’s meticulous research and so it was not removed.

Fast forward to 8 July 2019 and Professor Quentin Grafton, who has called for a water audit of the Murray-Darling Basin Plan (MDBP) for many years, is on  ABC Four Corners. He is saying that it is likely the amount of water being returned into the environment – which was the purpose of the government grant-based water buyback scheme – has actually declined.

And Professor Grafton knows a little something about water. He is co-chair of the ANU Water Initiative; chair of the UNESCO Water Economics and Transboundary Water Governance directorate; director of the Centre for Water Economics, Environment and Policy; and convener Geneva Actions on Human Water Security.

In his opinion, the “best case scenario” is that less than half of what was promised is being returned to the river system and

“... in the worst case scenario, we’ve gone backwards, not forwards … the amount of water going back into the environment has declined. We don’t know because we need a water audit of what’s going on in the Basin.”

“The Government keeps saying, ‘You’re wrong’, and we say, ‘That’s fine, tell us where we’re wrong’.”

As we mentioned in January, the Government's own 2018 Productivity Commission review of the $13 billion Basin Plan revealed:

'... the Plan's absence of transparency, lack of oversight and direction, and that it was lagging well behind schedule and wasting taxpayer dollars.'

This system is a rort... It is clear the efficiency and compliance measures stipulated in The Water Act have not been met.The best available science has not been used in terms of how much water has been returned to the environment. It might be significantly less than the Government's 700GL in water has been returned — it might be zero. This still hasn't been disclosed to the public...

The CSIRO also advised that it would be scientifically indefensible if climate change modeling was not included in projections. The MDBA ignored this advice...

The SA Royal Commission recommended that the scheme needed to be stopped. This was also ignored.

A proper independent inquiry is needed.

EDITORIAL: Something stinks in the Coalition and it's not just dead fish https://t.co/Q04GCbHMU3

ROYAL COMMISSION OR FEDERAL ICAC, ANYONE?

All the reviews, inquiries and a state royal commission appear to have been ignored by this Coalition Government.

The Government has known about it all along and chosen to do nothing about it. It is not through ignorance, it is deliberate decision-making.

However, at least one organisation is on the side of the Basin Plan's water buybacks. The National Farmers' Federation issued a media release, condemning the Four Corners report, suggesting it had

I'm sure you could find plenty of people who would be happy with receiving these subsidies at taxpayer expense, such as Webster Limited's $41 million in subsidies.

This scheme is a complete failure, without any compliance or transparency. It is in breach of The Water Act. And the Government has known about it all along and chosen to do nothing about it. It is not through ignorance, it is deliberate decision-making.

This is a national scandal.

How lobbyists confected a Four Corners backlash – weeks before the show went to air https://t.co/hOP8kXgPQQ

It is the opinion of this publication that the Four Corners program has only scratched the surface of the negligence underpinning this Plan, its lack of transparency and basic accountability, and the preposterous water buybacks which are, effectively, sanctioning the degradation of our river systems and endangering our long-term water supply.

According to Professor Grafton:

'First and foremost a water audit is needed and it can be done easily at such a low cost. I have been calling for this since 2007.'

There is no doubt a royal commission, with proper terms of reference, with the ability to declare criminality to investigate any corruption is needed. A truly independent, properly resourced and powerful Federal ICAC, not the toothless and limited one that has been proposed by this Coalition Government, is also needed.

Since royal commissions now only appear to eventuate after a Four Corners exposé, let's hope this latest program creates the impetus for this to happen.

This is only half the story! The other part of this editorial may be read in the IA members only area. It takes less a minute to subscribe to IA and costs as little as $5 a month, or $50 a year — a small sum for superb journalism and lots of extras. 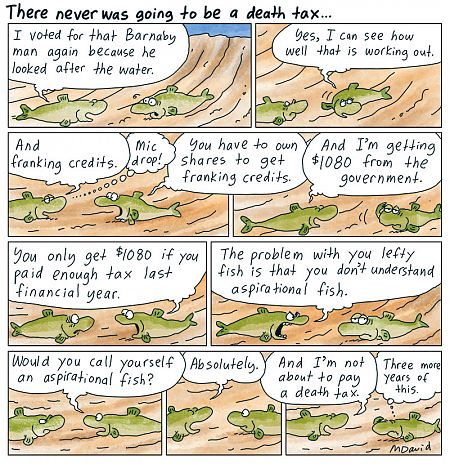