If the Department of Agriculture paid 2,500% above the average price for water in the Lower Darling, there appears to be one clear loser — the Australian taxpayer. Mark Zanker reports.

MOST AUSTRALIANS based in cities around the eastern seaboard do not pay may much attention to issues surrounding irrigation, water use and water marketing.

These matters are, however, of significant interest because they are intimately associated with the Australian economy and gross domestic product, protection of the environment, and the challenges presented by climate change.

This is demonstrated by the recent sale of water entitlements to the Commonwealth environmental water holder by Webster Limited.

Lake Tandou is one of the Menindee Lakes that are part of the Darling River system. These lakes are partly regulated to facilitate water supply to Broken Hill and also for the purposes of irrigated agriculture. The lakes are ephemeral in that they can be completely dry for lengthy periods, as has been the case in recent years where no water flowed along the Darling downstream of Bourke. Webster Limited owns the land area of the Tandou Lake and had, until 2014, been producing gossypium (cotton) but in 2016, the cotton producing facilities were put into "care and maintenance" mode. Cotton is a very water intensive crop and there was no water available.

Cotton growers Tandou has sold all of its #water entitlements to the Australian federal government for A$78 million. https://t.co/6fpVXfVq7z

Menindee had also previously been an area where table grapes, known as Menindee seedless grapes were grown, along with citrus. Grape and citrus production in the area was problematic because of such things as Queensland fruit fly infestation as well as irregular water supply. In 2015, the Costa Group announced that it would be closing its grape farm there. Table grape production has now ceased in the area.

This market mechanism was established in 2014 and a general description of how it works is contained on this page of the Murray-Darling Basin Authority’s website. As in any market, the price of the commodity is determined by its availability or, perhaps more relevantly in an Australian context, its likely availability into the future. It seems likely in Australia that water availability will decline in most areas that have up until now been productive agricultural land. This trend has been particularly apparent in south-western Western Australia, where rainfall has declined about 25 per cent since the mid-1970s.

However, let's put aside these issues and focus attention on prices and this particular transaction between Webster Ltd and the Federal Government. On 21 June 2017, the Commonwealth contracted to acquire 21.9 GL (17.8 GL LTAAY) of gap-bridging water in the New South Wales Lower Darling catchment from Tandou Limited, announced in a Department of Agriculture media release (shown below). 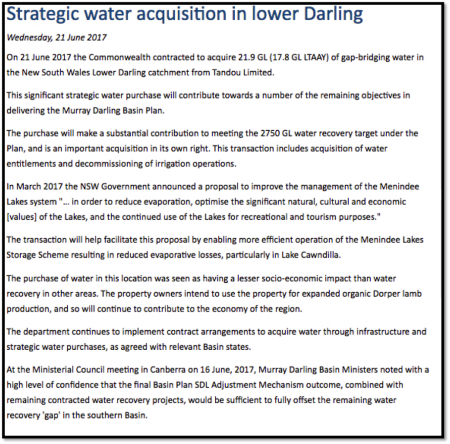 Among other things, it stated that the purchase was a significant strategic water purchase that would contribute towards a number of the remaining objectives in delivering the Murray-Darling Basin Plan, involving the acquisition of water entitlements and decommissioning of irrigation operations. It would also enable more efficient operation of the Menindee Lakes Storage Scheme resulting in reduced evaporative losses, particularly in Lake Cawndilla. It would also involve a lesser socio-economic impact than water recovery in other areas. The property owners intend to use the property for expanded organic Dorper lamb production, that is said will continue to contribute to the economy of the region.

The price of the sale was not mentioned in the media release, but the ABC reported that Tandou stated that it would receive $78m from the transaction. That would be used by Tandou (Webster Ltd) to retire debt. The ABC interviewed Tom Rooney, one of the founding directors of the water broking firm Waterfind Australia, based in Adelaide. He was asked for his assessment of the price paid and whether the deal was a good one for Webster Ltd. Rooney described the deal as a “fantastic deal” for Webster. The reason for that was that the purchase price paid by the Commonwealth was, roughly, $3,500 per megalitre, whereas the running average price of water in the Lower Darling traded on the water market over recent years was $140 per megalitre.

So, the price paid by the Commonwealth was 2,500% above recent market prices. A fantastic deal for sure!

Rooney said that he had not seen any explanation for this intervention in the water market from the Minister for Agriculture, although he did say that he expected that the water buyback was made for a good reason.

The price of $140 per megalitre of water, as the running average market price referred to by Rooney, appears to be greatly inflated, as the fact is that there has been no water at all associated with this price, so a potential purchaser is paying that sum on a wing and a prayer. Absent climatological features – like a strongly negative Indian Ocean dipole, as was experienced in Australia during 2016 – the money may be paid for nothing.

On its face, apologists for this purchase price may say, as the Department of Agriculture website suggests, that it is a good outcome environmentally because it will aid the attainment of the triple bottom line that the Murray Darling Basin plan is premised upon — in particular, that there should be no adverse socioeconomic effects from environmental water recovery. But that seems only to hold true for areas upstream of Bourke. Downstream, there will be no change in environmental conditions at all if, as has occurred in recent years, no water flows past that location. One also might wonder what traditional land owners along the Darling think of this outcome.

ABC Rural has reported NSW Water Minister Niall Blair as describing this transaction as a "win-win proposition" — but for whom he did not say. If, as Rooney stated, the price paid is 2,500% above running average prices for water in the Lower Darling, there appears to be one clear loser — the Australiam taxpayer.

What is the Murray-Darling Basin Plan? Are we there yet? https://t.co/Z8A15uWFZt

The COALition is destroying the Murray-Darling Basin - source of most of our agriculture and inland water. https://t.co/yD10l9e1WI

The cost of climate change denial

28 June 2017, 12:00pm If the Department of Agriculture paid 2500% above the average price for water ...
Join the conversation
comments powered by Disqus
News updates