Giles Parkinson responds to AEMO's latest report on the SA blackout and, no, the intermittent nature of wind farms was not to blame.

ANOTHER STORM of controversy about the role of wind energy is certain to erupt after the latest report about the state-wide blackout in South Australia by the Australian Energy Market Operator.

In its second update, AEMO has pointed the finger at settings on certain wind farms and fossil fuel generators in the events immediately before and after the state-wide outage last month, but the handling of the report has also raised questions about the actions of the market operator itself — both before and after the event.

The report dismisses suggestions – mostly from the Coalition and mainstream media – that it was the intermittent nature of wind energy that was the cause of the blackout. But it also underlines the failure of the market operator to make any preparations for the storm that it could obviously see spreading across the state.

The AEMO makes clear that it was major voltage disturbances – six in 80 seconds – caused by the collapse of three major transmission lines that led to the blackout.

But – not for the first time – AEMO’s press release and executive summary differs in emphasis to the detailed report and focuses on the role of the so-called “self protect mechanisms” in wind farms rather than major voltage collapse that followed the collapse of the transmission lines.

Shorter Chris Uhlmann: the AEMO report proved me utterly wrong. So let me repeat some nonsense about asynchronous power.

Even though these self protect mechanisms are just a matter of software and are easily fixed, AEMO’s emphasis has horrified many in the wind industry, who suggest that the market operator is deliberately allowing wind to be blamed even though its report highlights a collapse of voltage that could have been the main cause of the outage. They also point to basic errors in its report and its failure to take any preventative action as the storms approached.

“What we see in this report is a concerted effort to focus solely on the wind farms as if the system is perfect and the market perfect. I think we are now at war with the system operator.”

In the summary, AEMO points to the role of wind farm self-protect mechanisms as the straw that broke the grid’s back, noting that many wind farms were designed to switch off after riding through as few as two voltage events. (This is disputed by some wind farms, who suggest their limit was actually three.)

These so-called fault ride-through limits relate to factory settings – what South Australia energy minister Tom Koutsantonis describes as a “software issue” — and these have now been fixed at most of the wind farms. Those wind facilities without such limits rode through the events without any problems until the inter-connector closed.

AEMO was also careful to point out that the role of wind energy in the blackout had nothing to do with its “intermittency” or its ability to generate through high wind events, as many wind critics had suggested in the aftermath of the blackout. (See RenewEconomy's separate story 'Blackout report blows away big myths about the role of wind energy').

AEMO was also careful to point out that

the role of wind energy in the blackout had

nothing to do with its “intermittency” or its

It notes in the report:

'The most well-known characteristic of wind power, variation of output with wind strength (often termed ‘intermittency’), was not a material factor in the events of 28 September 2016.'

However, the point of contention lies around AEMO’s assertion that it was the role of the self protect mechanisms and the loss of 445MW of output that caused the Heywood inter-connector to overload and trip, separating South Australia from the rest of the grid and precipitating the system-wide blackout.

SA's Treasurer says the state is owed an apology over the questioning of renewable energy after AEMO's latest report https://t.co/IeHlDAQwON

Energy experts point to the detail of the report and the collapse of voltage that occurred before two of the biggest wind farms switched off, suggesting that the system was unstable and would have tripped anyway.

They point to this graph below, showing the voltage change immediately after a failed attempt to re-connect the third major transmission line to have collapsed after the storms. The energy experts say that this shows a massive voltage collapse that was happening anyway.

“To suggest that loss of generation is the final straw is misleading. When you see this graph it is clear that the whole system had become unstable and nothing was going to ride through that voltage collapse.” 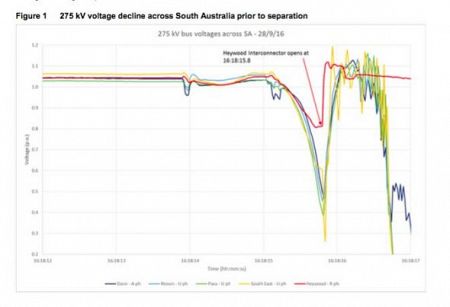 According to Kane Thornton, the CEO of the Clean Energy Council:

“No power grid in the world is designed to manage the rapid consecutive collapse of three major transmission lines like the SA system sustained on 28 September."

The wind industry is angry and frustrated that while the exact cause is unlikely to be known until the final report is completed in six months time, wind energy has been left to take the rap in the interim — and for a technical issue that is easily fixed and may not even have been as significant a factor as AEMO is making out.

And while the report does make clear that the issues with the wind farms are technical and easily fixed, there is no doubt that the political and ideological debate will be fierce, and won’t be confined to the facts.

But the report also points to two other major problems.

The first is that fossil fuels are not a panacea as some would wish. The diesel and gas generators paid handsomely to provide black start services to the state both failed, one within 15 seconds, causing the blackout to last much longer than it would have done otherwise. AEMO refuses to name the failed generators, citing “confidentiality” agreements.

The three diesel generators that should have provided power to Port Lincoln also failed — two tripped almost immediately and the third had to be shut down.

And, as the report also notes, this is not the first time that the Heywood interconnector has been separated from the state. Three of the previous disconnections occurred when the main coal generator, the now closed Northern brown coal power station, tripped and caused the system to collapse. The other occurred when bushfires in Victoria caused multiple transmission line failures.

The other issue is one of culture. As grid operators in china, the U.S. and Europe have noted on many occasions, the big issues with the transition to renewables are not really technical, but cultural. This will be a question asked of the AEMO and an independent assessment of its own actions is now called for.

Its report basically admits that the market operator had no Plan B for the storm. Some suggest it didn’t even have a Plan A.

It made no provision for extra back-up generation or for locally based ancillary services that could have stabilised the grid at its point of crisis and avoided the black-out. These ancillary services normally come from gas generators, but could in the future be provided by battery storage.

And it didn’t scale down the amount of power coming through the interconnector. It meant that, like a central bank with interest rates close to zero, it had no levers left to pull in case something went wrong. Its report suggests it was more worried about price impacts than system security.

And it seems that AEMO simply didn’t believe that the system was at risk. That approach seems extraordinary given its own admission that the winds of 120kmh were forecast, more than the rating of some wind farms in the state.

AEMO hands down its report on SA blackout. The verdict? Surge in Gen Y eating smashed avocado on toast to blame.

According to Andrew Stock, from the Climate Council and a former senior executive with coal and gas generator Origin Energy:

Given the available evidence in advance of the storm hitting, one has to wonder why on Earth they (AEMO) didn’t re-classify the risks of the loss of one or more transmission lines or generators as a credible contingency.

It would have been very unusual for senior management in a very high risk operation, in the face of evidence of a forthcoming storm, not to take precautionary actions to pre-emptively mitigate perceived risks.

It’s a bit like driving a performance car flat out into a storm, which most people would think would have been foolhardy. On what basis did they form those judgments?

In my experience it is very unusual for senior management in a very high risk operation, in the face of evidence of a forthcoming storm, not to take precautionary actions to pre-emptively mitigate perceived risks.

The CEC’s Thornton said no evidence has been provided to show that the system would have remained up and running if wind farms in the state had not tripped off to protect themselves in an unsafe electrical environment:

There is obviously a lot to learn from all facets of the event, from the operation of the interconnector to the robustness of the transmission network, the re-start procedures, the planning prior to the extreme weather and the operation of power generators.

The wind industry is committed to working with AEMO to look at current standards and operating procedures and whether these need to be refined.

This article was originally published in RenewEconomy on 19 October 2016 and has been republished with permission. You can follow Giles Parkinson on Twitter @GilesParkinson.

I actually got asked this yesterday in Question Time. What will the dinosaurs in Steven Marshall's Liberal Party ask me today? pic.twitter.com/JrAXnUjCkZ

Abbott all over again? Coalition ramps up attack on renewables https://t.co/51mEufJBAC #auspol

Keep up to date on COAL-ition spin. Subscribe to IA for just $5.