LATE LAST YEAR, the new President of Egypt, Mohamed Morsi, decreed that he would make all the rules and decisions and the people howled in protest and rioted in the streets; they had all that with Hosni Mubarak and were not going to take it anymore.  Morsi was forced to back down and declare his decree invalid while going ahead with a delayed vote on a new constitution.

In Australia, immigration minister Chris Bowen made a decree that Sri Lankans were really just coming for economic reasons and started to deport them by force, until the courts stepped in to stop him.

He still maintains that he can deny one group of asylum seekers the right to seek protection from persecution as he orders DIAC to deny them that right.

As Bowen told Cameron Stewart of The Australian:


"That's certainly the directive I've given the Department of Immigration," he revealed on October 27. "That where people have made no credible claims for asylum then they should be progressed and removed from Australia as soon as possible."

What Bowen did was revive and elevate the importance of the longstanding screening interview used by immigration officials on asylum-seekers. This process, which has been in place since 1994, usually occurs within 24 hours of someone's arrival in Australia. It involves immigration officials asking the new arrival why they have come here and what their circumstances and background are.

Bowen knew that just a few short years ago: 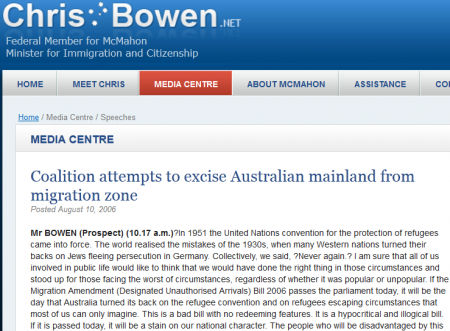 
The Contracting States shall apply the provisions of this Convention to refugees without discrimination as to race, religion or country of origin.

So, Bowen is well aware that his behaviour is illegal, but now, it seems, he just doesn't care.

The Fairfax press have been reporting for two years that Sri Lankans forcibly deported face imprisonment and torture, and SBS Dateline also covered Sri Lankans extensively in this series.


International opinion differs: Australia told Sri Lanka at a recent UN human rights meeting it must "take action to reduce and eliminate all cases of abuse, torture or mistreatment by police and security forces … [and] all cases of abductions and disappearances".

Back in Australia, Bowen said: ''We had people who had very clearly come to Australia for economic purposes. It is completely appropriate that swift action is taken to return them to Sri Lanka.''

But troubling questions remain about what has been taking place within initial screening interviews, about which the department refuses to provide details, citing confidentiality.

Both Dateline and  Fairfax have presented evidence that those returned are being jailed and mistreated; Bowen simply blames the smugglers, yet not one Sri Lankan in recent years has been accused of smuggling anyone.

And so the directive came from Bowen, because Tamils and others were clearly too scared to tell any journalist the real reason they are coming here.

We know the Opposition want it to be even more vicious regarding the Sri Lankans, they are happy to work with the Sri Lankan Ambassador to Australia, Thisara Samarasinghe, who was named in various UN and US reports as the war criminal head of navy when the mass murder of civilians was taking place in early 2009.

Australia is involved in a conspiracy with the Sri Lankan government — a conspiracy for returns and denial of access that does not exist with one other government out of the 60 or so countries from where people arrive here to seek asylum.

Our media do not seem to understand yet that interviewing refugee applicants in their home countries or in the neighbouring countries puts them directly in harm's way; writing about the consequences later does not mitigate their ignorance.

Bowen’s decree did not cause riots in the streets; it caused a few lawyers to remember their jobs and fight the illegal behaviour, but the media and Opposition cheered in unison.

Howard Government immigration minister Philip Ruddock tried the same tactic as Bowen in 2000, with 169 Iranians and Iraqis screened out and jailed in the dreaded Oscar compound of Woomera. Jeremy Moore of the Woomera Lawyers Group finally got permission to enter the compound on 1 December 2000 and discovered what was happening to these people.

There was a young couple there. They have written their story and were interviewed by Nicole Steinke on Radio National in 2002 about what happened to them.

They had fled Iran for political reasons and made it to Indonesia — where Australian police colluded with Indonesian police to have them arrested and jailed. Then they spent 3 months in jail, were robbed of most of their money, and the wife contracted typhus fever and also fell pregnant.

They finally paid bribes to get out of the Indonesian prison and got free passage to Australia, where they were taken to Woomera. F, the wife, looked up in the night and said “this is a prison, why are we in a prison”. 42 times they begged DIAC for help; 42 times they were ignored; until J, the husband, dropped a note out of a bus for Peter Mares and Jeremy Moore to find.

The wife was very ill, almost miscarried twice, nearly froze to death in the desert winter because there were so few blankets and after 5 months they were released. I met them when their baby girl was 3 weeks old; they had made it out of Woomera for the birth, but the baby D was listed as an unlawful non-citizen.

All 169 were screened back in, they were almost all found to be refugees either fleeing Saddam Hussein in the late 1990’s, or Sabean Mandaean’s and Christians. Hundreds of them are now so damaged they are suing for compensation and winning quite large sums.

Ruddock did not arbitrarily deport any of them, he did not make illegal deals with Iran and Iraq and he certainly tried with Iran.

Ruddock was a dreadful minister, but Bowen is so bad and so patently acting outside the law that he makes even Ruddock look quite mild.

To add insult to the injury being inflicted on the Sri Lankan asylum seekers, we know that 200 of those returned are in Negombo prison awaiting trial, others are harassed and being watched and spied on to prevent them making a living or having a renewed life, and Bob Carr has travelled to Colombo to conspire with the war criminal Government of Sri Lanka to prevent asylum seekers from ever leaving. This is contrary to Article 14 of the Universal Declaration of Human Rights, which states that everyone has the right to seek asylum from persecution and article 12(2) of the International Covenant on Civil and Political Rights which forbids any state or person from preventing any person from leaving their own countries to seek asylum.

We have also learnt now that 223 of the 387 prisoners on Nauru are Sri Lankans whose conditions the UNHCR and Amnesty International have both condemned as inhuman – Bowen shrugs it all off.

And Bob Carr grins while the Rajapaksa government are isolated by all but China, Israel and Pakistan.

(Editor's note: since this piece was written, Australia appears to have stopped deporting Sri Lankans on an arbitrary basis. Coming up next from Marilyn Shepherd, the story of 8 year-old Afghani refugee Mustafa.)