It is legal to cross borders without papers for the purposes of seeking asylum, even under Australian law, so why don’t our media challenge politicians who say the opposite? Marilyn Shepherd comments.

In 1999, then Immigration Minister Philip Ruddock introduced laws into Federal Parliament claiming anyone who pays a so-called people smuggler to bring them to Australia are criminals, paying criminals and therefore not really refugees.

In March 2000, Indonesian fishing crews began to face courts on this so-called smuggling charge, at which time the courts unanimously stated that it was not people smuggling but that the passengers were merely being transported to Australia to face the authorities and ask for asylum. However, the Indonesia crews were gaoled because the courts said they were “forced” to uphold our law due to significant expense to Australia of assessing “illegal” immigrant claims.

In November 2000, the UN drafted and approved a Smuggling of Migrants protocol, which excluded the movement of refugees from the criminal elements of crossing borders without papers and stating clearly that people must not be punished simply for being smuggled.

There have been two Senate inquiries into the stories of people smugglers, after children as young as 13 were found to be gaoled in adult prisons in Western Australia. Not one expert agreed with the Government position that seeking asylum had anything to do with people smuggling, because it is legal to cross borders without papers for the purposes of seeking asylum, even under Australian law.

Even after those two investigations, children being gaoled in adult prisons, other children being kidnapped by Australia and their families in Indonesia forced to think they had died at sea, we continue to have a media that refuses to ever concede it is not people smuggling to seek asylum in any other country but here.

Australia's refugee kidnapping: our own Voyage of the Damned http://t.co/lgbMQi2Vou #AusPol pic.twitter.com/Ml8AaXVKE3

Andrew Metcalfe, the former secretary of the Immigration Department, stated clearly in Senate estimates [Legal and Constitutional Affairs Committee, Senate Estimates, 26/5/2010] when asked about $31 million being used from the Overseas Aid Abroad programme to gaol refugees in Indonesia [IA emphasis]:

Senator HANSON-YOUNG: Would you be able to specify the items listed that will be funded through that $31.2 million and whether any of that money will actually go towards combating people smuggling, visa determination processes and the processing of involuntary returns?

Mr Hughes: The combination of things provided for includes assisting UNHCR with the early refugee status determination of irregular migrants in Indonesia, supporting Indonesia with accommodation and detention arrangements for people…

Senator HANSON-YOUNG: That is detention facilities?

Mr Hughes: Accommodation and detention arrangements for people intercepted by the Indonesian police and immigration. It is enhancing Indonesia’s capacity to undertake returns of people found not to require international protection and assisting the Indonesian authorities in improving their immigration system.

Senator HANSON-YOUNG: Does any of that money go to the IOM?

Mr Hughes: At the moment, the details have to be worked through with the Indonesian authorities because the intention is to support them in their local capability. So I cannot say at the moment how much of that might be spent through IOM. But it is possible.

Senator HANSON-YOUNG: I understand the idea of accommodation and detention facilities, but in terms of the policing side of it, does that lead specifically to people smuggling, or is that about policing those people who are held in detention?

Mr Metcalfe: It is about irregular migrants or people who are potentially being people smuggled to Australia.

I have sent these documents and notes to the media a great many times over the years, but still we have the same unchallenged lies told by ministers to justify their increased brutality.

I could imagine Scott Morrison, saying to himself 'you have to be cruel to be um, cruel'! #auspol pic.twitter.com/uF62NSXQc5

The culmination of that brutal ignorance was writ large in Brisbane last week in the case of stateless Rohingya baby Ferouz, born in Australia to people already recognised by the UNHCR as stateless refugees, but deemed by Australia to have arrived in the womb by boat.

It is not the first time such a decision has been made and upheld — even, in the case of six-year-old Tania Singh, as far up the chain as the High Court.

I am unaware if Tania was deported, but I know for sure that Mazhar Bakhtiyari was deported as were two children of Abdul Khadem who were born in Australian refugee prisons.

The judge also said the law's aim was to discourage the use of people smugglers.

If the government's decision was reversed, he said:

"… there may be more incentive for pregnant women to engage people smugglers.”

Since I wrote this article, which proves comprehensively that seeking asylum is not people smuggling as our media and politicians claim, it is simply exercising a legal right, not one journalist has challenged Scott Morrison, Chris Bowen, Tony Burke – or anyone else – about the twin lies we tell to justify our shocking abuses towards refugees.

Not a single journalist has even mentioned the smuggling protocol, which excludes refugees and forbids all forms of punishment merely for being "smuggled".

Terrible decisions and laws based on lies have terrible easily foreseen consequences, yet none of the usual suspects in the MSM will explore those in any great detail, just publish the occasional report.

Turning back the boats was the mantra of Abbott and Morrison before the last election and the MSM cheered them on as if it was the most sensible thing on earth. The consequences of that mantra are still being played out in the most horrific circumstances.

First, we heard claims about refugees allegedly being tortured and burnt by the ADF and dumped on the ocean in orange boxes 30 nautical miles from the Indonesian coast and left to die. That included babies and pregnant women, but Morrison didn't care a jot, he simply claimed sovereignty and protecting our borders, and not one journalist had the wit to ask when Indonesia became our borders.

Brilliant historian Marg Hutton has kept a running record of every circumstance, the numbers of refugees turned away and the number killed by our cruel policies of piracy, kidnapping and trafficking across international waters and ABC 7.30 finally showed us what happens in the orange boxes.

All this with the stated claim of “saving lives at sea”.

Also in the name of saving lives at sea, we see refugees being murdered and permanently maimed on Manus Island as shown by ABC Four Corners.

We have seen stories of the rape of refugee men on Manus Island and now stories of torture among refugees we have refouled to Sri Lanka and, recently, Afghanistan.

Among the occasional stories like these, the stand out consistent reportage has come from numerous special reports being leaked to the Guardian UK and reported by Paul Farrell and Oliver Laughland. Meanwhile, the rest of the media can't even be bothered to read the Ombudsman's reports of people going insane in detention.

At the same time, Immigration Minister Morrison refuses to assess a single claim until he can change the law to temporary protection only.

On ABC Foreign Correspondent this week, came a stark comparison with Italy, where we saw how an ethical and principled nation deals with asylum seekers.

In the High Court, the Government argues that we can do what we like at sea with immunity even though nothing Morrison is doing has been put to parliamentary vote. Now, to pre-empt all court cases, Morrison has attempted to delete the Refugee Convention from the Migration Act, as if that somehow excludes us from the law.

It's shameful that, due to lazy politicians pandering to racists and media too lazy to challenge them, we are regularly now attempting to traffic babies to their deaths.

So entrenched is the smuggler brainwashing a Federal Court judge thinks he can cite an explanatory memorandum to deny refuge to a baby.

When truth is a problem, issue a conclusive certificate: http://t.co/BjZoes5qmV 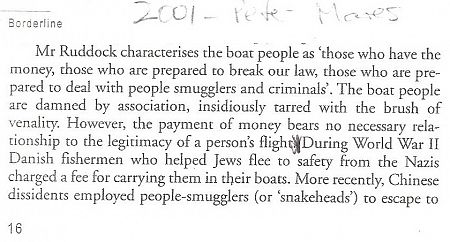 Buy John Graham cartoons from the IA store, like this one: Morrison 40 | Independent Australia http://t.co/SwH5katGvh pic.twitter.com/PAH5vWSwlA