Since the Refugee Convention was ratified and came into international law in 1954, it has been totally legal for anyone to arrive in Australia and seek protection under the law, whether we like it or not.

In 1992, the Australian Parliament enshrined the Convention into Sections 36 and 65 of the Migration Act 1958 and there it still sits, irrespective of how often the Canberra Press Gallery, Fairfax, the ABC and the Murdoch media choose to ignore the facts.

In 2001, when the MV Tampa was asked by Australia to rescue hundreds of people on the sinking Palapa 1, then Prime Minister John Howard went outside that law and set up trafficking routes to Nauru and Manus Island to hold just 1,600 people, he forced 500 back to Indonesia and killed 370 people in the process. Doing this, he wasted $2 billion, with many of the refugees ending up in Australia damaged and suing us.

The Federal Court case brought on by Eric Vadarlis and Julian Burnside for the people on their way to Nauru was won and the government was ordered to bring the people back to Australia, as they were on Australian territory and were being trafficked against their will at gunpoint to a spot in the Pacific where there were no refugee laws and no protections.

A 2002 speech by Burnside gives a good outline of the case against the Australian Government:

These people are being held unlawfully, in a way that is unconstitutional in Nauru. The Australian government could just as easily have locked them up here without constitutional protection. Rather, it was thought it politically expedient to ship them off to Nauru at a cost to Australia that is obscene. How the government seeks to justify that is extremely difficult to know, but I suppose having taken the first step in prostituting Nauru, the rest is just a quibble.

This is a staggering enterprise, on any view: about 1500 people have been hijacked at sea and transported against their will to a pile of bird-droppings in the Central Pacific. There they are strictly confined within two camps, in abominable conditions, in breach of Nauru's Constitution. For its complicity in this bit of hostage-taking, Nauru has been promised tens of millions of dollars. To perpetuate this system of state-sponsored piracy and kidnap, the government has committed Australian taxpayers to a staggering $1.2 billion over the next few years.

Of course, Howard simply ignored the courts and then the High Court reprehensibly decided not to hear an appeal to bring them back because they were already in Nauru and out of our jurisdiction.

The Gillard Government under Chris Bowen decided to try and make a dirty trading deal with Malaysia that the removal of people from our soil to other countries where we know they are not protected was brought to the High Court. The court rightly found that the deal was invalid because it breached the Refugee Convention and other Australian laws. That meant also that Howard's trading deals with Manus Island and Nauru had been unlawful and therefore invalid all along.

Since late 2008, the Iraqi war has gone to even further hell in a hand basket, with Christians and other minority groups like the Kurds forced to run for their lives. Sri Lanka's vicious civil war ended with the massacre of 40,000 or more civilians, the jailing of 300,000 and the near total destruction of the Tamil areas, as we have seen on our TV screens. Amnesty International and other human rights organisations are calling for an inquiry into gross human rights abuses by the Rajapaksa regime.

In 2008, the Taliban spread across Afghanistan and Pakistan, with the displacement of 3 million Pakistanis and the increased and continuing genocide of the Hazara. Pakistan has withdrawn all protection now for 2.6 million Afghans after more than 30 years. An Oxfam report details the plight of those forced to flee within Pakistan.

In 2009, Iran had a widely known bogus election that saw a major crackdown on dissidents, which to this day is causing more and more to flee their homes to see safety.

Tunisia, Bahrain, Syria, Libya, Egypt also have all had uprisings causing millions to flee their homes.

Julia Gillard's answer to all this was three old white public servants tasked to find a way to "stop the boats" — even though over 95 per cent of the people involved were found to be genuine refugees.  This meant that what we were doing again was deliberately turning away people we knew very well did face a very real fear of persecution.

The three so-called 'experts' decided that breaking the law to start Manus and Nauru again must be done regardless of the lack of human rights protections, that the country must be excised from itself, that refugees must be granted no advantage if they come by sea.

Unfortunately for them, those pesky refugees don't see things from some safe lounge room.

They also suggested no family reunion, which was a recipe for disaster and has seen thousands more intact families arrive since it was started in 2012.

We have seen over 20,000 people locked up or dumped in poverty without a single claim being assessed and still those pesky refugees think coming here is better than staying to have their heads cut off or be blown to bits or tortured in Malaysia or Indonesia.

The new myth started by the Daily Telegraph and repeated endlessly by the Canberra press gallery is that Rudd dismantled a brilliant and successful policy that stopped the boats. However when the Senate Human Rights committee looked into the report by the three old white men, they literally dismissed the report with three sentences:

The evidence that this approach will work is not yet supported by any downward trend in boat arrivals. While the committee is sympathetic to the view that this is still a ‘work in progress’, it is not the committee’s role to assess on a hypothetical basis whether implementation of the Expert Panel’s recommendations in their entirety at some point in the future would satisfactorily meet Australia’s human rights obligations. On the basis of the evidence before it, the committee considers that the measures as currently implemented carry a significant risk of being incompatible with a range of human rights. To the extent that some of those rights may be limited, the committee considers that the reasonableness and proportionality of those limitations have not been clearly demonstrated.

Yet the myth is that Rudd dismantled a lawful and legitimate policy persists, even though our own High Court found it to be illegal.

And since Gillard reopened Nauru and Manus Island, they have been forced to remove families due to illness and terrible conditions, forced to start assessments and the number of people arriving doubled and then tripled, because those pesky refugees don't want to stay home and die and don't want to be tortured in rancid prisons in Indonesia as shown in this report.

Gillard and the Canberra press were all completely wrong — Rudd was right to dismantle the dreadful prisons on Nauru and Manus Island, as he was dismantling a criminal human trading exercise. And yet they continue to claim that Indonesia has to "stop the boats", even though the government has been aware for over a year that Pakistan is taking away all protection for Afghans and that some will obviously come our way.

And now our media are prattling that if only Rudd hadn't shut down two empty illegal prisons the world would have no refugees in it.

Australian cruelty towards persecuted people – like our media stupidity – shows no sign of ending any time soon. 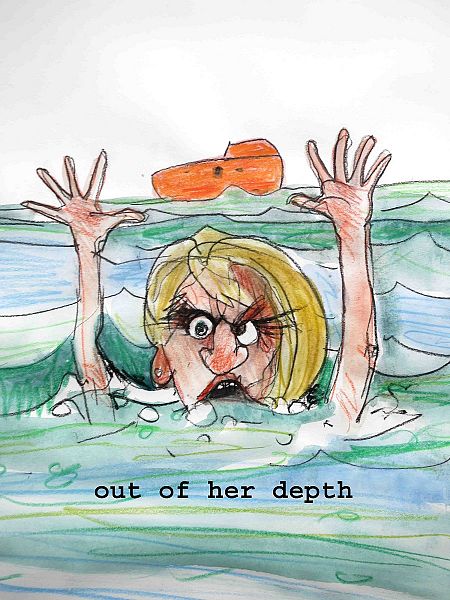