Refugees and the Houston Report

Could this signal a return to bipartisanship on refugees in Australia? Will Australia now resume pulling its weight in the international community? Alan Austin reports. 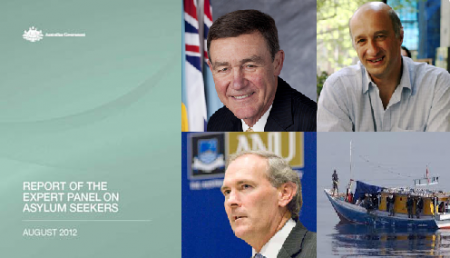 The Houston report to the Gillard Government on asylum seekers released on Monday has upset virtually all combatants in the current political brawl. But it just might work.

It rejects the Government’s arrangements within the region. The Malaysia solution ‘needs to be built on further’.

It disputes Opposition leader Tony Abbott’s assertion that refugee boats can safely be turned back to Indonesia.

It offends Greens leader Christine Milne who claims the report advocates a return to ‘the bad old days of offshore processing’.

It disappoints refugee support groups by recommending removal of family reunion concessions for arrivals by boat.

And it criticises the role of the High Court:


Although not endorsing any current political position, it does provide a detailed plan. Importantly, it affirms critical realities often lost in the ideological argy-bargy in Parliament, on the hustings and in the media.

First and foremost, the situation is dire. Since 2001, 964 asylum seekers and crew have been lost at sea seeking Australia. ‘To do nothing is unacceptable,’ panel chief Angus Houston said.

The second is that the problem is partly one of Australia’s own making. Australia has contributed to the destabilisation of several countries through its support for US efforts to secure Middle East oil through destructive invasions.

Australia, according to the report”


‘needs to actively promote a more productive engagement by the wider international community in addressing the global phenomenon of forced displacement and irregular people movement.’

The third is that there are no queues. This refutes comments from Opposition Leader Tony Abbott last month:


‘The people we accept should be coming the right way and not the wrong way. If you pay a people-smuggler, if you jump the queue, if you take yourself and your family on a leaky boat, that’s doing the wrong thing, not the right thing, and we shouldn’t encourage it.’


‘…there needs to be greater hope and confidence that applying through the regular processes of international protection, including in source and transit countries, can work better and more quickly.’


‘Mr Abbott should know that there is no queue when you run for your life. The recent execution of an Afghan woman by the Taliban (another example of a very well-established pattern) gives some idea of why people seek asylum.

‘A significant proportion of boat-people in the past 15 years have been Afghan Hazaras fleeing the Taliban. If an Afghan were to embrace Mr Abbott’s scruples and look for a queue, the obvious place would be the Australian Embassy in Kabul.’

The fourth reality is that Australia can and should accept far more refugees than it does at present.


‘Given the world's humanitarian crisis, the panel recommends that the Government immediately increase our humanitarian program from 13,750 to 20,000 with 12,000 of those places going to refugees. This would double our annual refugee intake offshore and onshore.’

The panel recommended expanding the intake further to 27,000 within five years.

Australia received only 23,434 refugees in all categories under UNHCR mandate in 2011. This is puny compared with other rich countries. And nowhere near as generous as many poor countries. Almost 10 million refugees were relocated worldwide. Australia ranks 47th in the world.

In the same period, France received 210,207 refugees – almost nine times Australia’s number – in one fourteenth the land mass. Germany accepted 571,685 on terrain smaller than that of France.

Even Austria, which fits into Australia 91 times, received more than twice Australia’s intake at 47,073. Switzerland, half the size of Austria again, accepted even more than them: 50,416.

None of the above nations enjoys Australia’s robust combination of strong employment, high income, low debt, low taxes and low poverty rate. None has the benefit of Australia’s low population density and uninterrupted economic growth since 1992.

Within hours of receiving the Houston report, the Prime Minister announced that the Government would accept all 22 recommendations. Independent Rob Oakeshott expressed support. The Greens immediately rejected it.

Yesterday, the Opposition allowed the bill to pass the House of Representatives, though taking the opportunity to scold the Government in for taking so long to re-implement the Nauru option.

We now await the decision of the Senate on Thursday.

The world is watching.