#QldVotes: A split on the conservative side helps Labor win

Labor's minority Government will be returned in Queensland, this time with a slim majority, reports Dr Lee Duffield.

LATE on election night, the Queensland Labor Premier Annastacia Palaszczuk was able to say she was confident of getting a majority and the ABC election analyst Antony Green, cautiously, said it was likely. 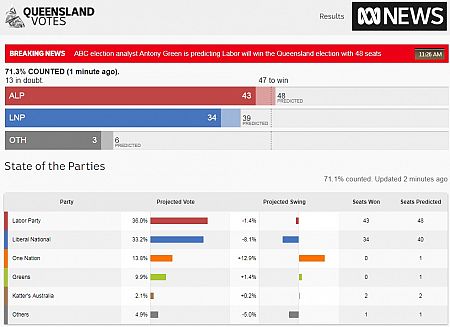 Green was more confident this morning as counting continued. At 11.26am, his ABC Queensland election results page showed the results above, along with his breaking news prediction of a Labor victory.

Out of 93 seats, meaning 47 needed for a majority, the ABC had Labor winning 43, the Liberal National Party (LNP) 34 and the rural-based Katter Australia Party (KAP) 2, Independent 1, with 13 seats in doubt.

However, Green has predicted the final results to come to Labor 48, LNP 40, KAP 2, Greens 1, One Nation 1, along with that lone Independent.

There is still some doubt about some likely “wins”, such as Thuringowa in Townsville, which was actually dividing three-ways among Labor, LNP and One Nation. Likewise, the LNP loss of Maiwa in Brisbane, so far given to the Greens, could go to Labor.

Even if those went against incumbent Labor the indications remain for a new Labor government.

In the last Parliament the KAP members were ambivalent and did not block the minority Labor government. The lone Independent in the House looks like being the former Labor Mayor of Rockhampton, Margaret Strelow. A Greens member would try to get concessions on issues like the Adani coal mine and tree clearing, but would not want a minority LNP government. No joy for the LNP in any of that.

Opposition Leader Tim Nicholls would not concede defeat on the night, pointing to the big number of uncounted votes, but, being well short of a majority, could only say that voters had wanted to “shake things up”.

Labor spokespersons said their vote had held up in the north of the State, where unemployment had been undermining their position and they had made overall good gains in the more populous south-east.

Should they yet fail to secure a majority, as the biggest party in the new House, they would still be in prime position to form a Government.]

Antony’s got the confetti out. It’s official then.

One main factor in the election outcome was a large split on the conservative side of politics.

The One Nation movement took a lot of votes off the LNP, much more than it took off Labor and those votes fell far short of going back to the LNP as preferences.

The anti-immigration lobby group peaked in one rural electorate at nearly 35%, making impacts in the regions and the fringes of Brisbane, although still not breaking through to get a clutch of seats in parliament.

One other strong possibility is that supporters of the former National Party don’t like it being amalgamated in Queensland as the LNP under Liberals such as Nicholls from Brisbane.

The Nationals as the “bush party” or the earlier Country Party of Joh Bjelke-Petersen always tended to be more extreme in their conservatism, and behind-the-scenes enmity between them and the Liberals was famous.

Many of their supporters might have been looking for a replacement party of their own when they went to One Nation or the KAP — both of them stronger in the bush and weak in town.

The black and white numbers have blown up the idea of One Nation preferences putting the LNP into power, because it would appear to have turned out the other way around — they split the conservative vote and gave them net loses.

Labor lost support to the Greens in many Brisbane seats, but its result overall was fairly steady. Also, where the Green vote was high, its preferences were disciplined and looked to be overwhelmingly going straight back to Labor.

A second factor tied up with the showing of the minor parties was the much talked-about voter cynicism and unease causing many people to dislike the two major parties.

"I think this is a clear indication that One Nation is not going anywhere. We are going to be around for a while yet," Senator Hanson said. #9Newshttps://t.co/g04rpcYy1a

After all, candidates getting more than 35% of the primary vote were few and far between.

Very difficult to identify current election issues having a direct bearing on the voting on Saturday, except for unemployment in Townsville and development of the Adani mine — which is now obviously dividing Queensland and highly dangerous for any government to handle.

Queensland Premier @AnnastaciaMP says she remains confident Labor will form a majority government, although the result remains far from clear by the end of election night counting.