THERE'S NO DOUBT that at different times throughout history there have been people of limited ability catapulted to positions of power. The reasons for this are broad and range from dumb luck to the complex machinations of political puppetry by the rich and powerful.

In recent years, however, the complete absence of basic competency of some in Australia’s highest official ranks has been extraordinary.

Tony Abbott is one such extraordinary example.

Abbott has managed to bring down the efficiency of and regard for every public office he has held. His senior positions have encompassed, but are not limited to, health, social services, women, Indigenous affairs and, of course, the prime ministership.

His career highlights include: 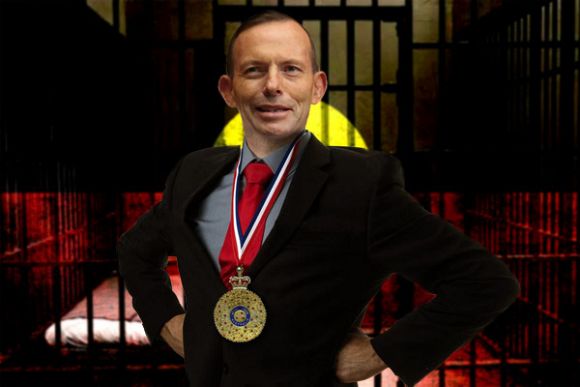 Many fervently but mistakenly hoped Abbott had finally exited as gracefully as those red speedos would allow, following his recent humiliating electoral defeat in the seat of a Warringah — a blue-ribbon Liberal seat since 1922.

Alas, this was not to be.

Despite having once declared that “The last thing [he] would want to do is impose [his] views on the wider world”, Abbott is, of course, doing the opposite. Like other gormless and disgraced politicians before him, such as John Howard, he refuses to go away.

Far from retiring into insignificance on his $300,000 taxpayer-funded pension, Abbott has instead been promenading the world as a guest of every far-right think tank, parading his views to all and sundry. He is constantly recycled to spruik anti-human ideologies backing faceless big money sponsors of far-right think tanks such as the Institute of Public Affairs (IPA), the Ramsay Centre (RC), the UK’s Policy Exchange (PE) and the Global Warming Policy Foundation (GWPF).

Instead of sinking into obscurity as his deeds surely merit, however, Abbott is still cited in the media as a person of note. Recently, he has even been awarded the Queen’s Birthday Medal for … well, for reasons that are hard to fathom. 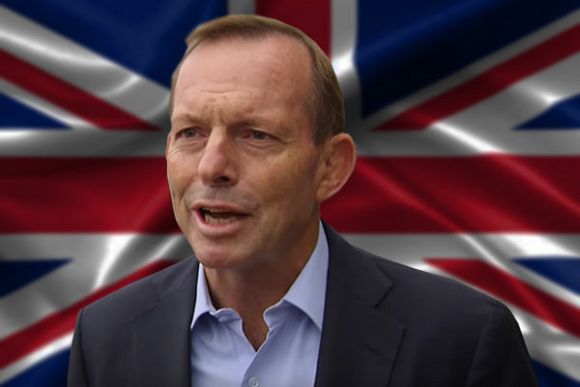 And it appears Tony’s Mum has finally managed to find that elusive British passport, after rummaging around in the attic — where she must have hidden it during the dual citizenship kerfuffle. Despite the pandemic and never having negotiated a trade deal, Abbott has jet-setted off to the UK, to be a forerunner for the plum role of trade envoy for the British Government’s Board of Trade.

Once a loud and passionate opponent of euthanasia and abortion, Abbott is now apparently of the view that sacrificing a few oldies for that greater cause, the God of Economy, is the way to go.

Former Health Minister Abbott – who, incidentally, does not hold a degree in medicine, science or ethics – believes it’s okay to just let people die from the pandemic because, wait for it, the economy comes first.

"… Governments have approached the pandemic like trauma doctors instead of thinking like health economists, trained to pose uncomfortable questions about a level of deaths we might have to live with."

We shouldn't attempt to preserve "almost every life at almost any cost" or follow medical advice to achieve zero community transmission — this, according to non-expert Abbott, was provided by "unaccountable experts".

Next, surprise, surprise, the unaccountable Abbott ventured forth to attack that progressive and infuriatingly popular enemy of conservatives everywhere, Victorian Premier Daniel Andrews, accusing him of wishing to extend a "health dictatorship".

So, why is this unaccountable non-expert given a platform via the mediocre media to advocate for killing off our elderly citizens?

The reality is that the faceless, backroom backers of the think tanks he supports have been pulling the strings since Abbott was first elected. Now inconvenienced by the pandemic, involuntary euthanasia seems to be their latest economic "health" plan.

Tony Abbott has suggested that some COVID-19 victims should have been left to die because of the economic cost of lockdown measures. pic.twitter.com/uZRT01xgz0

After years of IA asking for proof he had renounced his British citizenship, Tony Abbott finally produced a letter in July. Ross Jones got an expert to take a close look at it and over 20,000 IA readers took a close look at the results.