Prisoner X and the God that failed

Will there be any lessons learnt after the murky and suspicious death of Australian Mossad agent Ben Zygier in an Israeli gaol, asks Evan Jones. 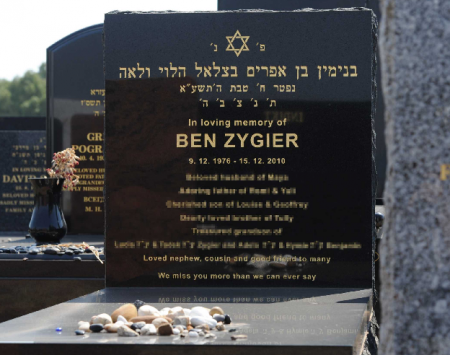 AUSTRALIAN-BORN Ben Zygier, known in the media until days ago simply as Prisoner X, died in December 2010 in a high security Israeli prison cell. He had migrated to Israel in 2002 and had since started a family. He had reputedly become a Mossad agent, and was in the possession of multiple passports and multiple aliases.

What is the background to this hot news item globally?

From a News Limited report:


One of the Zygier family's neighbours said Ben was fluent in Hebrew and dux of Bialik College. "I would talk to him in Hebrew as he was fluent in the language," she said. "He was a very helpful guy, always happy and smiling. He was the dux of his college, went to Monash University to study law and became a successful lawyer.

Apart from being smart, a nice guy.

Bialik College? Wikipedia to the rescue:


Since being established in Carlton North in 1942, Bialik College offers the Victorian Certificate of Education (VCE). Although Bialik College is considered a 'Jewish day school', from its beginning it was intended to be a Zionist school, with the establishment of the State of Israel central to its identity.

A Zionist school — what? From Bialik College’s mission statement:

It appears that Ben Zygier learnt all his lessons well, the compleat product of Bialik College’s desired socialisation.

Bialik College is not alone amongst Australian Jewish faith schools in its consideration of the state of Israel, as noted on IA in an earlier article. Here are excerpts from a sample of school mission statements:


The King David School is a Progressive Jewish school established on the principles of inclusion, egalitarianism and social justice. It is committed to engendering within its students a deep and abiding sense of community, a strong and proud Australian identity and a close and meaningful relationship with the Land and State of Israel.


We strive to foster critical thought, cultural interests, tolerance, social responsibility and self-discipline  … A knowledge of our Jewish traditions, ethics and family values, a positive commitment to modern Judaism and a love for the State of Israel help to ensure our young people become caring, active, responsible members of the community.


Mount Sinai College strives to develop the full potential of every child – intellectual, social, emotional, spiritual, physical and creative – through child-centred learning experiences. … Blending the best of our Australian and Jewish heritage and fostering a love of Israel, our nurturing family environment seeks to instil social and ethical values in each child and to develop respect for self and others.


Emanuel is a Jewish Community School that nurtures a commitment to Jewish community, heritage, ethical living and the State of Israel. We do this through a commitment to egalitarianism, pluralism, coexistence, tradition, mitzvot, Torah and Hebrew. We do so as Jewish, Australian and Global citizens.


The mission of Mount Scopus Memorial College is to provide each student with an education and an environment that … provides Jewish learning, values and experiences, within a Modern Orthodox and Zionist framework, that enable each student to make an informed choice as to the meaning of their Jewish identity.

Along with perennially exemplary – even over the top – ideals of personal morality and social ethics, there is a perennial (seemingly uncritical) commitment to the state of Israel. Save, at least in this sample, for Mount Scopus, where the explicit commitment to Israel has disappeared, but a commitment to Zionism (meaning unspecified) remains.

Now, this is a peculiar state of affairs. Israel’s raison d’être is racial discrimination and ethnic cleansing. How these schools reconcile their devotion to exemplary ethical values with devotion to an exemplary institutionalised opponent of ethical values is an unasked and unanswered question.

Even apart from Israel’s manifest criminality, nation states in general have no morality — only interests. That any educational institution worth its salt would bestow a commitment to the wellbeing of a particular nation state is, of necessity, asking for trouble.

This bizarrerie is a natural product of political Zionism — one that the marginalised ‘spiritual’ Zionists predicted in the early 20th Century. The anti-Zionist Moshe Menuhin – brought to Palestine by his family as a child, but leaving it as a young man in 1913 – appropriately labelled the debasement of Jewish values in the suppressed title of his 1965 book The Decadence of Judaism in Our Time – “Jewish” Nationalism: A Monstrous Historical Crime and Curse.

Whether Zygier killed himself or not is irrelevant. Zygier was murdered by the state of Israel. To repeat, notes Bialik College:


We are a Zionist school that inculcates a love of Israel. We recognise the centrality of Israel and Hebrew to the Jewish people. We support Israel and are committed to its well-being.

Zygier learnt his catechisms and did the same. Except that a rift, it appears, developed between Israel’s concept of its ‘well-being’ and Zygier’s sense of his own well-being. Zygier made the ultimate sacrifice with his life for the good of Israel, as conceived by its leadership.

The Wikipedia entry for Bialik College had two entries under ‘Notable Alumni’ — that of Joshua Frydenberg and Anthony Goldbloom. On 14th February, someone has added Ben Zygier to this list. Is this sick? Is Zygier’s trajectory and demise something that his College would be proud of? Has the entry been made by someone other than Bialik College personnel?

Ben Zygier made ‘aliyah’ to Israel. By contrast, Joshua Frydenberg made aliyah to the Liberal Party of Australia and to Federal Parliament – a life choice not without risks, but a decidedly safer option than Zygier’s ‘principled’ choice.

Will there come a time when Australian Jewish schools drop Israel from their mission statements? Will there be any lessons learnt from Ben Zygier’s personal sacrifice, duty to the calling urged by his schooling, in the face of Israel’s perfidy?

As for the Promised Land, forget Israel. Australian Jews have reached their promised land already. To paraphrase Rod Quantock — you’re standing in it.

* UPDATE: 19/2/13, 11.35am:  A commenter has noted my earlier claim – that Bialik College had sacked its former principle, Joseph Gerassi, 'evidently on the basis of his homosexuality' – lacks credible evidence. The commenter is correct. That claim (and its adverse implications for the College's formal values), on the current evidence, was unwarranted.

Some who have reason to know claim that Gerassi's sin was an abrasive management style. That sole posited explanation, plausible in itself, sits uneasily with Gerassi's treatment. The summary sacking of Gerassi, without defence (but with acknowledgement of his positive contribution to the school) remains and is anomalous, a process that does have adverse implications for the College's formal values.

We have deleted the erroneous text.