John Haly discusses Australia's population "Ponzi scheme" and the factors that influence inequality and per capitawealth.

IS AUSTRALIA FACING a crisis of overpopulation and do we have enough resources to continue to expand our numbers by bringing in more immigrants into our country?

Should we persist in expanding our population, allowing immigration, consuming limited resources or close our borders, thereby limiting population growth and over-consumption?

Or is there something else at play we are not factoring in?

There is a model of population growth, which assumes that a growing population demands more goods and services, and that it will generate higher costs of consumption and borrowings. This argument implies that greater levels of productivity increases and/or an increasing market of workers are needed to support an ageing population.

Hence Australia’s focus on immigration in the midst of rising mortality and departures and falling fertility. Constant population growth without extraordinary economies of scale can only result in diminishing marginal returns balanced against the earth’s finite resources. It results in a downward spiral of resource depletion, higher unemployment, depleted wages and income, higher medical costs, limited accommodation facilities and urban congestion.

This failure of an overpopulated economy is often referenced as a form of an unsustainable “Ponzi scheme”. Given our experience of these factors in our economy, advocates of this concern such as the Sustainable Population Australia (SPA) advocacy group, blame the glut of economic indicators failing in Australia on the Ponzi scheme of population growth.

The only time in the last two decades that we have experienced a sharp (and temporary) rise in population growth rates was in 2007/2008 — predominantly due to immigration and partially a fall in death rates and rise in birth rates. In the wake of this rise, Mark O’Connor and William Lines wrote “Overloading Australia“. ABC’s Quentin Dempster wrote an article on Mark O’Connor’s book and on the Sustainable Population Australia (SPA) advocacy group in 2010.

Mark outlined his well supported concerns for population growth in both articles and pointed out:

Sydney, Australia's ponzi scheme growth is praised as a symptom of its success; will grow by 2.1M in 20 yrs: @smh. https://t.co/UZOxt8T1ad

One of the inherent faulty assumptions behind the population Ponzi hypothesis, is that all people are regarded as equal consumers. Yet our environmental impact and consumption is anything but equal. The Ponzi arguments often overlook the role of public policy decisions which are driving inequality.

The SPA has mounted criticisms at baby bonuses, child care rebates and family tax rebates because it presumes to promote population growth. The reality is these bonuses and rebates do not offset how expensive it is to bear children in this country. Australia's has the world's most expensive childcare and rising economic cost of children. So the SPA's concerns are hyperbolic in nature. Hence the Federal Government’s abolition of the Baby bonus among other spending cut “reforms” for families, reflects the real lack of commitment to supporting any verbal commitment to population growth.

On the other hand, the costs of immigration to bring in workers, to facilitate 457 visas, and even to pay them for working in our economy, is nowhere near as expensive as rearing children. Certainly elements of corporate Australia would prefer to boost our population via this means, than use Australians, as foreigner labour can be bought cheaply. Abuse of visa workers is certainly not uncommon.

So the question should be, is the need to boost population to provide support for our economy or to facilitate exploitation and inequality?

Transportation congestion, while being an issue in Australia, is a product of ideology that favours roads over public transport. The ongoing failings of planning and the dubious justifications of WestConnex’s impact on the Sydney transport system are illustrative of a political ideology that is rewarding corporate road builders who donate heavily to political parties. Not so much a factor of population but a failure of political impetus to build sustainable infrastructure that should have easily met our population growth.

Governments tend to favour population increases to spread the burden of public debt bond borrowings, raise revenue and stave off recession, presuming our population has the discretionary income to transact. The over-focusing on our tiny public debt, ignores the real recessionary pressures in Australia. These being credit growth and our unsustainable private debt at 123% of our GDP. While certainly a by-product of population, perhaps we should focus on providing better regulation of banks to alleviate our population's over-consumption of debt, serves Australian's interests more that does current ideological policy.

Australia has a high rate of consumption but our household consumption is not rising at the same consistent or relative speed as population in Australia. There are many inconsistencies generated in our entrenched poverty and social inequality in Australia. Links presumed between consumption of housing and population are tenuous, especially as the housing construction rate is exceeding demand needs. For example, Sydney is already a city of 90,000 unoccupied homes and Melbourne with 83,000 vacant residences. Blaming population for the risks of Recession and Housing booms/busts, ignores the affects of policies that support unquarantined negative gearing capital gains concessions, and facilitating Asian laundering of cash needs. Even where population contributes, inequality breeds erratic consumption levels and greed consumes far more than its fair share. 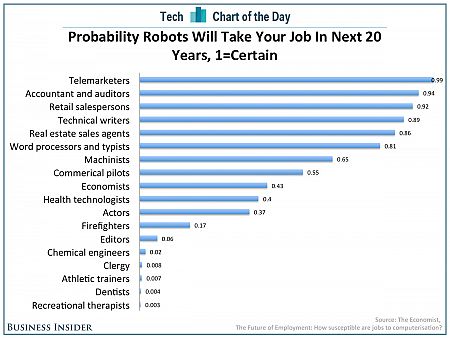 Expectations of Job losses to Technology

Technology was once considered labour-augmenting in a pre-industrialised society but the onset of technological innovation is changing the playing field. The consequences of automation, is disappearing more jobs than outsourcing has ever done. This is evident when we consider the MIT modelling on the relationship between machine learning/technology and job decline. In fact, “Gartner Inc, the technology research firm, has predicted a third of all jobs will be lost to automation within a decade“. This technology overreach of Malcolm's Turnbull’s “innovation nation” may create a shortfall in jobs often inaccurately attributed to over-population. 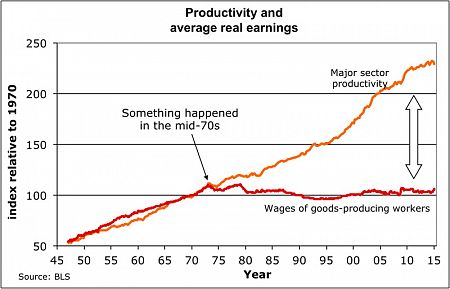 Despite the productivity growth, it has not been accompanied by corresponding increases in jobs and wages earnings. Technology and falling remuneration’s impact suggest, paradoxically, that the human component (population) is becoming less relevant to the emerging economic, wealth generation structures. This has implications for the assumption that GDP growth is being fuelled by population growth. For economic growth to be driven by demand then there must exist a capacity for supply to meet demand. But what if supply can not be paid for, because fewer individuals hold jobs?

Jobs earn income, and public services provision wants collection of income tax. Already 13.9% of Australians live below the poverty line. Full-time jobs are diminishing in preference to part-time positions and the top earners/corporations utilising tax avoidance means tax collection will only diminish. Internships providing unemployed labour for minimal costs favour corporations who already pay minimal tax. When population movement does not provide equitable changes in internal revenue collection for distribution into the economy then it can't serve a population at any level.

And age to die!

A rising life expectancy has contributed to an ageing population. Paying for it by increasing younger income earners ignores how increasingly more expensive over time children are to bear and rear. It also overlooks how the aged baby boomers actually contribute financially to the economy and the young (as even Mark O’Connor recognised).

While the public purse is quite capable of supporting an ageing population, the lack of political will to do so impedes us. Solutions such as social cooperatives for aged care delivery, lifelong education, taxation on assets, corporations and superannuation are solutions we are unwilling to implement. In fact, the aged – well supported by the public purse – would result in greater spending inside our economy, in the same way as providing for the impoverished would. The ideological and political redirection generating vast inequality is more responsible for a deterioration in support for the aged, than population numbers and longer life expectancy.

What of we who survive?

At the risk of pointing out the obvious, the Ponzi accusation for Australia's population is somewhat limited by our "surviving" population density. Australia outside of it’s capital cities has the smallest by a long shot. Outside of our capitals you may have to move south to the Antarctica to beat Australia for a lower population density. Yes, it is a semi-desert continent and our capacity for rural production will be victim to climate change but again, the failures of government to support rural Australia should not be laid only at the door of population. So perhaps a country whose population is only .3% of the global population on 5% of the world's land mass, population is not the primary problem?

The Ponzi scheme that is failing, is not population, but the redistribution of per capita wealth. These inequality policies don't invest in infrastructure, rely on disproven "trickle down" economics, generate greater poverty and divide us into "taxed and taxed-nots" (where untaxed corporate farm their profits offshore but still receive $50 Billion in tax benefits). These policies of inequality are merely provisioning for the inevitable revenue winter to come, that no absence of population growth will correct.