Australians don’t have far to look to see governments effectively guiding their economies through the COVID-19 pandemic. Alan Austin surveys successful nations nearby.

ACROSS THE TASMAN, New Zealand’s jobless rate has just declined from 4.2% in the 2020 first quarter to 4% in the second.

New Zealand’s exports have grown impressively over the last year, with June exports 2.2% higher than the year before. The trade balance has been in healthy surplus for six of the last seven months. Retail trade is up 2.3% over the last year, inflation is at the optimum 1.5% and building permits are at an all-time high. 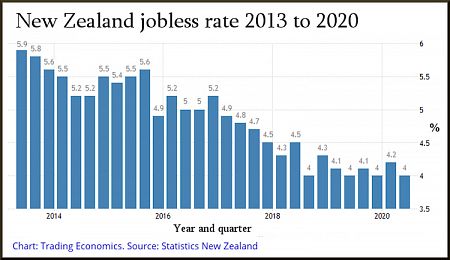 Not far to the north, Malaysia also improved its jobless rate from 5.3% in May to 4.9% in June. It reported a positive annual rate of gross domestic product (GDP) growth in March and impressive outcomes on exports.

Further north again, Taiwan’s economy is advancing steadily. The jobless rate fell from 4.16 to 3.97% in June, wages are growing steadily, exports remain buoyant and the trade balance is in strong surplus.

Further afield, in Europe, economies with jobless rates below 5% include Switzerland, Iceland, Germany, the Netherlands, Hungary, Norway and Estonia. Most are enjoying positive wage rises and strong export performance as well.

Impact of the pandemic

At the other end of the table, economies struggling with the economy and infection and death rates include the United States, Chile, Brazil, South Africa and Australia.

In dramatic contrast to the last global economic crisis, Australia is failing in most areas except exports and corporate profits — which are both booming.

Australia’s jobless rate blew out to 6.37% in April, then to 7.08% in May and 7.45% in June. That is the highest since November 1998 when Paul Keating’s reforms were still taking effect. Productivity has been jammed at 100 index points for the last 16 quarters. 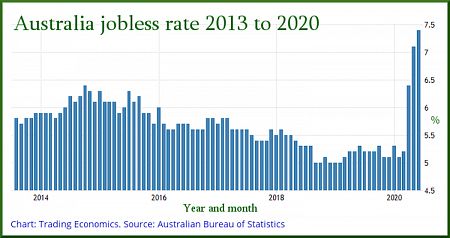 Quarterly economic growth fell in the first quarter this year to -0.3%, the first negative quarter since 2011 when floods ravaged much of Northern Australia and the worst since 2008 when the global financial crisis (GFC) whacked every developed economy.

Annual economic growth tumbled to 1.39%, the lowest since the fourth quarter in 2000 when Treasurer Peter Costello was battling the early 2000s global recession.

Gross debt expanded to a staggering $741.4 billion last Friday bringing the Coalition’s total debt to $469.7 billion. Just since April 2018, the Coalition has added more gross debt than Labor took on during its entire five years and nine months contending with the GFC.

By May, Australia’s net worth had plummeted under the Coalition from negative $205.9 billion at the 2013 Election to negative $624.2 billion. It will be worse now, as we shall see next month in the final budget outcome.

There is no excuse for this. Exports are at record highs. The trade balance has been in surplus for the last 30 months, recording a new all-time monthly high above ten billion dollars in March this year. Corporate profits have been soaring since September 2016.

The primary reason the budget is still in deep deficit, debt is deepening, wages are stagnating, benefits are far too low and the Aussie dollar is down the S-bend is that proceeds of the current export and profits boom have not been shared fairly.
This is the outcome of poor government decision-making over the last six years, not external global conditions — and not the recent pandemic.

Australia’s performance through this global emergency is in dramatic contrast to its success through the financial crisis which devastated the developed world in 2008 and lingered until 2013.

Through that period Australia clearly had the world’s most impressive economy, being the only OECD or G20 member country to avoid recession, deep unemployment and widespread bankruptcies and suicides. As shown more fully here, Australia shone on productivity, wages growth, job creation, economic freedom, income per person and wealth.

These were the results of the courageous policies adopted by the Rudd Government in 2008 on the advice of then-Treasury Secretary Ken Henry. Those initiatives – including the school buildings program, cash payments to families, investment in community housing and the falsely-maligned national insulation scheme – rocketed Australia to the top of the world’s economies, where it stayed until 2014.

'Fiscal stimulus in Australia in my view was absolutely necessary and was a critical factor behind Australia's good economic outcomes. While one can argue about the exact nature of the implementation, the fact that it was designed to take effect quickly was vital in the circumstances: "go hard, go early, go to households", as Ken Henry put it.' 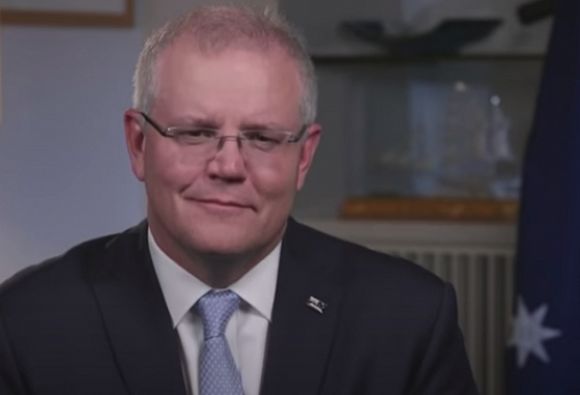 No single economy is leading the world today as Australia was between 2008 and 2013. No government as yet has had the wisdom to implement anything as far-reaching and visionary as the Rudd/Henry programs.

Of the 42 major OECD and G20 member countries which reported GDP growth for the March quarter, only five reported positive growth: Chile, Ireland, Russia, Turkey and Sweden. Of the 16 countries to report June quarter GDP growth so far, only China is positive. We may get a clearer picture of which economies are faring best through the current crisis when we see more June quarter GDP figures in the coming days.

Australia could yet recover its rightful place at the top of the world. For this to happen, however, it must abandon virtually all current economic policies and return to those which actually serve the people of Australia.

You go hard, you go early and you go to households. If treasury is telling you there's a problem coming, the time to action a response is now. #auspol https://t.co/YMMFuri7oR