DEBATES AROUND breaches – and reform – of Australia’s system of political finance are usually conducted by elected politicians or party officials, media pundits, or academic experts.

These are people who have easy access to the media, so we get to read or hear their views. So, we know fairly well what they think. We know much less about what ordinary Australians think about how their politics is financed.

Every time there’s a scandal, politicians from unaffected parties talk about the public’s outrage. But how much do people actually care?

In a recently published study, I investigated what ordinary Australians think and feel about the financing of politics. This research drew on a survey designed to be broadly representative of the national population. It provides the basis for answering some basic but important questions about public opinion on political finance.

How much do people care?

How much priority would you like to see your state and the federal government give to reforming political finance laws?

Just over a third of respondents (34%) thought reform should be a “high priority” for Australian governments. A further 52% considered it a “medium priority”. Only 14% said reforming political finance laws should be a “low priority”.

The survey also asked respondents to rate the current financing system. Is it “broken and needs to be replaced”? Does it have “some problems” that need to be repaired? Or, is it “alright the way it is”?

A small fraction (7%) of respondents were satisfied with the status quo. Most people (73%) were eager to see reform. About 20% thought a root-and-branch upheaval was needed.

Clearly, the public do care about political finance and they see flaws in the current system. But they don’t think there’s a crisis in political finance. Figuratively, a new car is not needed — just a competent mechanic.

What reforms do people want?

We can’t expect ordinary people to know the details of political finance laws. But if they are told some facts about current laws, they may have views about the direction reform should take.

With this approach in mind, the survey sought respondents’ views on several mooted reforms, after providing them with details about the federal laws in that area. The results are summarised below: 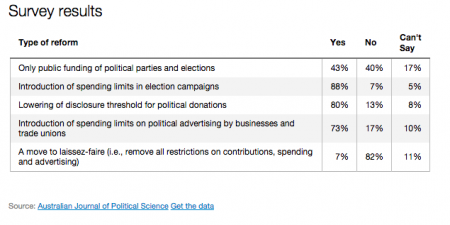 Overall, it appears ordinary Australians support tighter regulation of political donations and spending. The vast majority are likely to oppose the idea that regulations should be loosened or removed.

How much does partisanship matter?

We might expect that people’s attitudes on political finance issues will reflect their partisan preferences.

We might think, for instance, that a typical Liberal voter worries more about the effects of trade union donations than a typical Labor voter. We might expect Labor supporters to worry more about corporate donations than Liberal voters. And we might expect supporters of minor parties and independents to be most disillusioned with the system — and worried about both corporate and union donations.

To test this hypothesis, I analysed the statistical relationship between respondents’ party preference and their opinions about political financing. I found partisanship is only a weak predictor of respondents’ attitudes.

Political party donations — what we know & what we should know #auspol https://t.co/9qk4nTKVt5 … @independentaus pic.twitter.com/hYwhIVZZpG

A better predictor of how ordinary people feel about such matters, including what kinds of reform they would like to see, is the strength of their scepticism about the current system.

Strong critics, irrespective of their preferred party, worry about corporate and union donations. They want radical reform. Weak critics are less worried about donations and, unsurprisingly, less eager for change.

My study shows political finance is an issue where there is a lot of agreement among people who vote for different parties. This is unusual for Australian politics, but such broad agreement on reform by politicians seems unlikely in a hyperpartisan enviroment.

Catch up on other articles in the series here.

Zim Nwokora is a Lecturer in Politics and Policy, Deakin University. This article was originally published on The Conversation.