Pension cuts: The abuse of our elderly citizens

Is it fair for the Turnbull Government to shift the pension goal posts for elderly citizens but allow exemptions for parliamentarians? Deputy editor Michelle Pini reports.

SINCE the Coalition Government came into power, it has cut $1.2 billion from aged care and now, $2.4 billion from elderly pensions.

This, according to Malcolm Turnbull will make the system “fairer”.

In an era when prime ministers are changed more often than Kardashian outfits, let’s cast our minds back to the Howard Government when generous superannuation tax concessions were implemented.

While these were heavily weighted in favour of high-income earners, most people saw the writing on the wall: there would no longer be universal government pensions available in the future and implementing our own retirement would be necessary for the majority.

And many Australians, aided by compulsory superannuation contributions and the tax advantages of personal contributions, put their savings into super. They did not "rort" the system like many a politician, or avoid taxes, like a sizable number of corporations — they just put their earnings into super instead of the bank.

Fast-forward to 2016 and superannuation investments are no longer golden tickets of retirement. Many funds (and ordinary investors) have taken huge hits in estimated earnings. But most still thought our taxes – which the vast majority of us without offshore accounts in the Caymans still pay – would be there to provide security for our future.

Of course, this is no longer the case. Instead, our elderly, who have paid taxes all their lives and were told to put all their money into super, have to justify every cent they spend to Centrelink for their meagre government pensions and are forced to collect shopper dockets for "luxuries", like coffee or dinner out.

Though changing the rules and cutting pensions to offset incompetent government mismanagement is suddenly acceptable, it is not the case for government ministers, for which these rules do not apply. 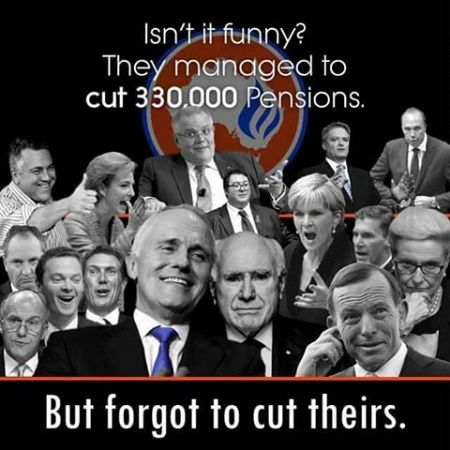 The solution then is simple. Become a parliamentarian and then get the sack for rorting the system, like Bronwyn Bishop, who will receive a pension of $255,000 a year, plus a "Life Gold Pass" entitling her to ten taxpayer funded business class return flights per year, for the rest of her life.

Or if you are appointed treasurer and then sacked, you get to keep your pension for life, and also a diplomatic gig in the U.S., which earns former treasurer Joe Hockey $450,000 per annum plus living expenses. Apparently, his famous lament of "the age of entitlement being over" does not apply if you are an incompetent parliamentarian.

Current PM, Malcolm Turnbull – who can hardly manage his own party – receives an annual salary of $522,000 (plus expenses and other entitlements) and will be entitled to a sizeable lump sum payout, based on years of service, plus other entitlements (such as car costs, office establishment and lease costs, fixtures, telecommunications, office stationery and publications) based on the discretion of the "prime minister of the day". This is despite an estimated personal wealth of $200 million.

Parliamentarians aside, daily expenses for ordinary Australians, retired or not, are not decreasing.

Today, I spoke with retired couple Max and Lauren — who did not wish to have their actual names published, for obvious reasons.

Having worked since he was 18, Max waited until his 70th birthday last year to stop work and Lauren retired at 65, after working since she was 15.

Despite several periods of economic hardship during their 48 years of marriage, they have worked hard (often at two jobs in Max’s case) lived simply, paid off their modest home in Melbourne’s northern suburbs and educated both their children without assistance.

Max and Lauren were encouraged – by the media, by financial advisers and by government policies – to put their savings into super. Their hope was to retire and enjoy themselves based on the fruits of their considerable years of labour. They did not expect the rules to change and certainly not so drastically.

With their home in which they live (which is exempted) they have a little over the minimum allowable amount of superannuation over which the aged pension assets test applies, as well as modest savings in the bank. They are fit and healthy and could live for many years, but they continue to pay private health insurance, as Max has had heart surgery and doesn’t know if there will be further medical costs, which would eat into their superannuation nest egg.

They saved and planned for many years to retire on their super and a modest government pension, which was assessed at $411.82 per fortnight each.

They have now been informed by Centrelink that, based on government changes to make the aged pension "fairer", this would be reduced $265.95 per fortnight — $2.05 below the minimum daily travel expense allowance for government ministers.

About that "War on Christmas" furphy.
Why do you hate pensioners?#PensionCuts pic.twitter.com/nNl9Bq1pOW

“We’re angry! If you’ve done the right thing and worked all your life you get penalised. Our taxes are rewarding people who have redistributed the rules for their own pockets — it’s very wrong that politicians are exempt from these rules.”

And they are not alone. According to a Newspoll survey taken for the December quarter, support for the Coalition plunged seven percentage points among voters over 50.

In order to qualify for their huge pension sum, Lauren and Max's home contents and car (which they share) are included as assets, and they must justify any major spending from their super nest egg. They are also not permitted to gift more than $10,000 to their children, or elsewhere.

“We worked hard all our lives and never took a handout — why shouldn’t we be allowed to live comfortably, or help our children? What have we worked for?”

Bill Sneddon, is the creator of Facebook page Pensioners for Senate. He informed me that he is a spokesperson for the soon to be registered, United Pensioners Party.

"We will be standing Senators in all States. The government abuse of pensioners must stop. Parliamentarians should apply to Centrelink for the pension."

Perhaps the age of entitlement will soon be over for parliamentarians after all.

Get rid of obscene politician superannuation, and perks. - Sign the Petition! https://t.co/g8i92FYPWp via @ChangeAUS