Malcolm Turnbull says this year will be different. Jim Pembroke is not a trapeze artist but he knows a tight-rope walker when he sees one. 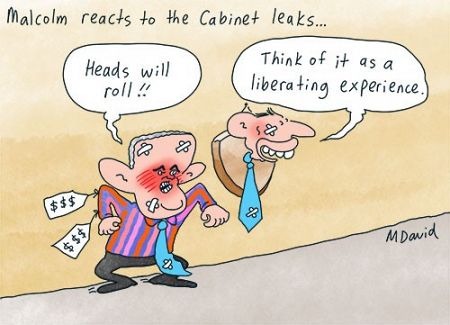 THE CIRCUS is back in town!

That's right parliament resumes this week. So get your popcorn ready, find a good seat and strap yourself in, because politics is a circus and there's no way out of the freak tent.

Drove around Parliament House this afternoon. Mad landscaping going on to soften the look of the new security fence for the pollies who return on Monday. It's like installing a new toilet seat for the Queen

Last year, we had the dual citizenship saga, marriage equality postal vote and Bob Katter hitting us all in the face with a crocodile custard pie.

Malcolm Turnbull's old contortion act was roundly booed by the audience last year, but recent job numbers have given the Prime Minister a bit of a swagger — top hat tilted and shiny.

The ringmaster has been spruiking a rejuvenated show. The only thing his "trickle down" performance lacks is a bunch of tax cuts and a few more snake charmers.

Step right up, step right up. Welcome to the circus. The greatest show this side of an ugly, security fence.

Ignore the cabinet files and peanut shells scattered on the lawn.

Is that the smell of animal cages or stagnant wages?

Australians: wages are stagnant, there are cuts to health and education, cost of living is increasing, inequality is growing, we're concerned about climate change. #turnbull: lets cut corporate taxes and export weapons! #auspol

Yes, the conservative "carnies" are starting the year on an upbeat note. A far cry from last time when they strapped ringmaster Turnbull to the "Wheel of Death", where a conga line of human cannonballs took turns firing themselves at him as he spun, faster and faster to the right.

The Prime Minister's aerial adversary in the high wire act, Opposition Leader Bill Shorten, may also have his escapology skills tested — particularly with Turnbull keen to lock him in a suitcase, a straitjacket and suspend him upside down in any number of by-elections.

But it's the Prime Minister who must try to stuff his own painted performers into a too-small car before the next election. He's been juggling and losing opinion polls for two years now. The passing of gay marriage laws, a win in the Bennelong by-election and hitting himself over the head with a rubber chicken have failed to deliver the bounce the Coalition needs. It hasn't helped that the scary "white-face clown", Tony Abbott has been bumbling around causing trouble and mayhem. His troupe of slapstick buffoons slipping on banana skins, soaking everyone in buckets of water and kicking Malcolm in the pants each time he bends over to pick up a coin, super-glued to the pavement. The finale to this bizarre act could come quickly with 30 consecutive Newspolls not far away.

Oops. Apparently this is Turnbull's 26th negative #newspoll result in a row.

♫ Can you hear the drums, Fernando??? ♫ pic.twitter.com/OhQotHuvSR

Let's face it, this Coalition outfit have always been a few clowns short of a circus. For the last four years in government, they've been held together with red noses, grease paint and duct tape. The hard right critics in both the National and Liberal Parties are still lurking in the wings — hands full of overripe tomatoes.

Ringmaster Turnbull's hyperbole of fabulous delights and amazing achievements in the lead up to the next election might pique the interests of some in the audience but he has yet to show a performance punters can really get excited about.

When the show's over, there'll be some scattered applause, but most circus goers will look at their flatlining wages, soaring living costs, overpriced fairy floss and call for the ringmaster to stick his head in the lion's mouth.

Turnbull can talk up the economy all he wants
Stagnating wages and rising costs
Make a nonsense of it all#auspolhttps://t.co/bQudnOeO5l

Terror bomb plot: Quick Australia, get under the doona covers!