Along with the 24-hour strike by Toll truck drivers on 27 August, it has become clear the strike has been used by others with a more far-reaching agenda (based around COVID-19 vaccine disinformation), it would appear — to bring down the government. Although, whether NSW or Commonwealth Government is not clear.

While the Transport Workers Union has confirmed that cost-cutting motives of Toll had fueled the strike, a social media campaign #IStandwithTruckies has brought into debate the issue of a COVID conspiracy and exposed links to far-Right groups, leaving truckies, as some fear, with a legacy of public distrust.

Of greatest concern are links to groups calling for an insurrection. The first worrying signs of this kind of threat emerged in early August when it was reported widely that a video was seized, reportedly showing a fake Australian Federal Police (AFP) Commissioner. A Perth man was arrested and hundreds of fake police badges were seized by the AFP.

The man impersonating AFP Commissioner Reece Kershaw was allegedly commenting on how to "bear arms" on the government, set up an "alternative police force", carry out detentions of political leaders and how Governor-General David Hurley could be removed and replaced by a "former political candidate". Further arrests and fake badges were seized in Queensland.

The group had been in contact with other unnamed groups, though apparently being watched by Australian Security Intelligence Organisation (ASIO). But just who are these people and who are these groups? Further developments have shed some light on this question.

Of greatest significance is the emergence of "The Australia Project"–  website still under construction – which has echoes of the attempted insurrection earlier in the month. Some information from the group has been put up on the #IStandwithTruckies hashtag on FaceBook.

Information on this group is difficult to find, with one YouTube video, published on 21 August, of ex-policeman and fervent Christian, Kent Brodie Brown. He outlines the main themes of The Australia Project to a group known as the "common law assembly" — basically, government(s) are trying to take away our rights and it is time for people to unite and rise up.

He mentions his conversation with former American army captain Seth Keshel and the threats to our rights – particularly from vaccines – and the government’s increasing control over our rights. It is not a virus that is killing people, but the vaccine itself – “already, two children have died [from vaccination]" – he bemoans.

The group does not use Twitter but uses a messaging platform, Telegram, to get its messages out and stay in communication. Of greatest concern is The Australia Project's call out to members of the police and Australian Defense Force (ADF) to join in what appears to be its overthrow of the government. This message was echoed in the previously mentioned YouTube video of 21 August and has a common thread with arrests earlier this month in Western Australia and Queensland.

Brown mentions an American contact who has provided him with considerable inspiration, but who is Seth Keshel? Turns out he first came to notoriety following the Trump election defeat last year by providing "evidence" that the Georgia and Pennsylvania elections were rigged by the Democrats.

Until recently, Keshel was employed by private investigation firm, Texas Investigative Security Network — a well-connected organisation of mostly ex-military staff, with a strong Christian focus. Here, Keshel (also ex-military) was employed as a "data analyst" when he entered into the Trump camp, it seems, to back Republican claims of election rigging.

Keshel developed a working relationship with some powerful people in the U.S., particularly Joe Flynn of the Catholics for Trump (brother of Michael Flynn, Trump’s ex-advisor of national security) with whom Keshel apparently worked to develop – since discredited – 2020 U.S. Election analysis. He is also an acquaintance of former White House chief strategist Steve Bannon, the driving force behind far-Right website Breitbart News.

#warheadsonforeheads
From Seth Keshel
I am going to be breaking some very big news at 4 PM when I take the stage.

As the #IStandwithTruckies campaign gained ground, others have raised their heads to jump on board, including Ross Cameron from SkyNews and Senator Pauline Hanson. Another player is discredited QAnon advocate, Karen Brewer. From early in the campaign she was posting tweets on civil disobedience from American "experts" and offering advice. (Here, in a recent message, Karen is appealing to those Australian truck drivers "calling for people to stand and gather" to reach out to her.)

But the truckie strike has attracted other more high-profile individuals, such as MP Craig Kelly, who urged the truckies, via a retweeted Telegram post by The Australian Project, to hold on and that help was coming — all this over an image of the Australian Light Horse charge at Beersheba in World War I.

'Please don't give up hope. The cavalry is mustering, and very shortly we'll be charging. And to those who have stolen our freedoms, that are part of the medical fascist takeover of our nation — we have you in our sights. You have nowhere to hide.'

Kelly of course has just publicly declared his membership with Clive Palmer’s United Australia Party due to Clive’s big "war-chest", no doubt to fund further disinformation campaigns during the upcoming Federal Election. And so, we also have Clive Palmer himself weighing into the truckie strike campaign, tweeting attacks on the Berejiklian Government and Gladys' supposed totalitarian tendencies.

Of concern here is the theme Palmer has advocated, saying that there have been few COVID-19 deaths and that the real threats are from the vaccinations themselves — identical to the views of The Australia Project, the same people who are seemingly advocating an overthrow of the government. One has to wonder if Clive’s war-chest has been spent on anything other than advertising.

Are any of the claims by this group justifiable? Widely criticised by legal and social welfare groups, is the sloppy way that rules around COVID restrictions have been rolled out and enforced in NSW — such as the move by the NSW Government to give police an amnesty of infringement notices.

Like the weak definitions of what an essential service is and what social distancing means for people, this only highlights the ineffective way the NSW Government has responded to the COVID crisis but is hardly a reason to overthrow the government.

What are the motives of this newly vamped United Australia Party other than to cause COVID confusion in the public mind? Is it really backing a para-military style insurrection? Every concerned citizen should have their eyes on this latest tragic development in Australian politics.

The key question to this is whether the arrests which occurred at the start of the month are linked in any way to the activities of The Australia Project? Our Federal police and intelligence services likely know the answer. 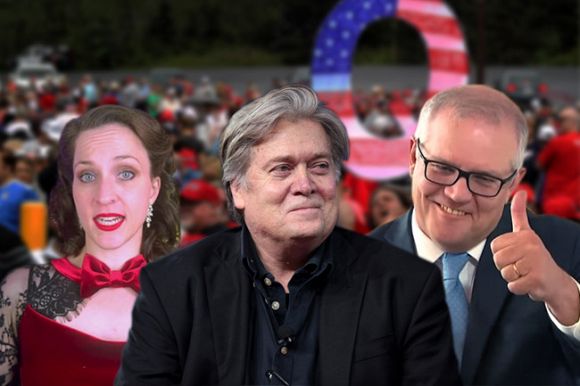 9 September 2021, 4:00pm The National Party has abandoned farmers in favour of caving into the demands of ...

29 August 2021, 9:00am Not content with influencing elections and spreading COVID-19 disinformation, the ...

21 August 2021, 8:00am From climate denial to COVID-19 confusion to the destruction of liberal democracy ...
Join the conversation
comments powered by Disqus
News updates