Palmer and Gore: What are they good for?

When climate realists and coal billionaires share a stage to commit to climate change action, the end is nigh for the climate dinosaurs, says deputy editor Sandi Keane.

THE MEDIA HAS STRUGGLED since Wednesday to make sense of the Palmer/Gore shock presser with guess-which-media monopoly trumpeting it as a win for Abbott and many of the more independent-hue cynically declaring it a damp squib and Crikey even going so far as to call it a win for climate denialists.

Now, after the media frenzy that followed the bizarre coupling of Australia’s Living Treasure (and sworn AGW-denier) with Planet Earth’s Super Hero in a so-touted ‘Clive Palmer saves the world’ media conference, we’ve had some clear air and time to sober up.

Firstly, it should be noted, Al Gore – former U.S. vice-president and rightful victor in the 2000 U.S. presidential election – is no-one's fool.

I was privileged to be a guest at a Melbourne breakfast with Gore some years ago. During his speech, I witnessed first-hand his unyielding faith in the power of truth and facts. This Nobel laureate is on a turbo-charged mission. He’s outcome-driven and this, coupled with being a master of the art of suasion, is the key to his success.

If anyone thinks there’s been no shift in the body politic in Canberra to act on global warming thanks to Gore’s intervention with Palmer, then more fool them.

Granted, a tectonic shift it wasn’t. Gore deplored Palmer's repealing of the carbon tax. But when Palmer United Party (PUP) senators met last weekend, there was reluctance to break an election promise.

Remember,  the key weapon in Palmer’s arsenal is Abbott’s record election-breaking promises. The PUPs and their top dog, Palmer, have now made themselves a bigger target, especially for the Murdoch press with whom Palmer seems to be in a continual state of ‘pistols at dawn’. The PUPs will be guarding against any perceived breach of trust with the voters that could bring them undone at the next election.

Here’s how Gore and others involved in his intervention saw the potential disaster in undoing the much-needed climate action policies of the previous Labor Government:

The Palmer United Party was on track to not only ditch the carton tax and legislated ETS, but the rest of the raft of clean energy initiatives introduced by the Gillard Government. With PUP senators holding the balance of power from July, Australia’s chance of meeting its emissions target was on a hiding to nothing.

Enter several high profile climate campaigners, like former Australian Conservation Foundation boss, Don Henry, and Christine Milne’s former chief of staff, Ben Oquist , who were lobbying Clive Palmer behind the scenes. Impromptu as it looked, last Wednesday’s shock announcement by the Palmer United Party had been carefully negotiated over a number of weeks.

At the risk of re-stating the facts, let’s look at PUP’s scoreboard before and after Gore’s intervention.

What benefit is Palmer United Party’s support for an ETS?

Whilst there is agreement in the non-Murdoch press that saving the RET, the CEFC and CCA is a positive, there’s little credit given to Al Gore for supporting PUPs’ ETS. So let’s put some meat on the bone. Readers can then decide if it was a win for Abbott and the climate deniers or a win for the planet.

In voting against the abolition of the Climate Change authority, Palmer United Party senators will move an amendment to provide for the establishment, by Parliament, of an Emissions Trading Scheme (ETS), which will only become effective once Australia’s main trading partners also take action to establish such a scheme.

The trading partners thus named are China, the *United States, the European Union, Japan and Korea. All these countries currently have emissions trading schemes in place be they pilot, regional or national programs.

Important note here: Australia already has a signed MOA to link its ETS to California’s scheme. More on that later.

But as a policy to take to the people at the 2016 election?

Being willing to bide their time until the next election in 2016 was obviously factored in by Gore and his advisers before agreeing to the media conference. This would give our trading partners enough wriggle room to lock in or extend their current programs.

Having checked with a PUP staffer yesterday, to date, there is no condition that such emission trading schemes have to be federally-run or nation-wide.

Our trading partners and their ETSs

Firstly, the rest of the world is moving to hoover up their greenhouse gas emissions.

With eight new carbon markets opened in 2013, the world’s emissions trading schemes are now valued about US$30 billion.

“China now houses the second largest carbon market in the world, covering the equivalent of 1,115 million tons of carbon dioxide, after the EU ETS, with its 2,039 MtCO2e cap in 2013.”

Let’s check out now what is happening with afore-mentioned trading partners.

California is on track to establish the world's second largest emissions trading scheme.

In July last year, I met with Mary Nichols, chair of the California Air Resources Board.

One of the key reasons for Chairman Nichols’ visit to Australia was to sign a Memorandum of Agreement with Australia’s Clean Energy regulator  — a strategic move by California and the then government to develop a complementary ETS in Australia.

So, the point is that Australia already has in place a mechanism for linking our ETS with the U.S.

As the eighth largest economy in the world, California has the power to galvanize action beyond its borders. Its cap and trade scheme commenced at the beginning of 2013 and has already linked to the Canadian Western Climate Initiative ETS. In 2013, there were 23 U.S. states and 4 Canadian provinces in the Regional Greenhouse Gas Initiative, Mid-Western and Western GHG trading schemes.

With the introduction of the U.S. EPA Clean Power Plan legislation, more states are sure to join these schemes in order to comply with state CO2 emissions targets.

China is also showing Australia its heels in the race to seize a slice of the low carbon economy. With an ETS pilot scheme already up and running, according to the World Bank, a national emissions trading scheme will be established in the next five-year plan (2016-2020).

On April 6, 2010, the Korean government passed the Enforcement Decree of the Framework on Low Carbon becoming the first Asian country to pass a national cap-and-trade system. Its ETS will commence in six months as of January 2014. South Korea’s pledge is to decrease its emissions 30 per cent relative to ‘business as usual’ by 2020, which equates to 4% below 2005 levels.

What can we say?

The savvy Europeans have had an ETS up and running since 2005. As the first and still the biggest emissions trading scheme in the world, we’ve seen some impressive results.

Germany goes from strength to strength to stake out its lion’s share of the low carbon economy. Renewables’ share of total power consumption rose from 23.4 per cent last year to 24.7 per cent this year, according to a report in RenewEconomy.

Already has a carbon tax of $US2 applicable to 70 per cent of its emissions as well as several regional schemes.  Tokyo’s scheme covers 8 per cent of the country’s emissions and saw a reduction of 23 per cent last year from 2000 levels. Japan has been playing a ‘wait and see’ game with Australia so it will likely be a case of “I’ll show you mine, if you show me yours”.

In summing up, an examination of the facts shows we have good reason to put aside our cynicism.

The Palmer conversion is a game-changer.

By 2016, the named trading partners who already have trading schemes in various forms (detailed below), will have consolidated their schemes, renewable energy would have dethroned King Coal and we’ll have Labor, the Greens and PUP all campaigning for a return of the ETS.

New climate convert, Clive Palmer, will, no doubt, have attended the UNCCC’s COP21 Climate Conference in Paris in 2015, where he’ll have hogged the limelight promoting a reincarnated ETS for Australia.

Australia’s greenhouse gas emissions (GHG) will have risen alarmingly and comparisons will be made with 2013, when they fell the most in 23 years — thanks to the carbon tax.

Undoubtedly, all the blame will be laid at the feet of the Abbott Government.

Thanks to Al Gore’s intervention, the world will be watching with great interest to see if his play paid off.

Result? Australia will no longer been seen as a laggard, but as a global leper.

Clive’s Damascus conversion from hero of the little people to self-appointed hero of the planet will see him and his ankle-biting PUPs wedging Abbott at the 2016 election.

Abbott has already attracted the scorn of the world media. As more embarrassing news rolled in of our boorish, blundering leader abroad, a new Twitter hashtag –  #anidiotabroad – sprang up and was trending during the course his foreign gafcation.

So what is the most likely outcome?

There’ll be more internal ructions if Abbott continues to stare down the will of the people and squander our opportunity to grab a share of the low-carbon economy. His failure to reduce our CO2 emissions will see him flayed alive by the media.

For a man as bereft of ideas as Abbott, he’ll surely follow his hero’s playbook and be dragged kicking and screaming with an ETS to the election — just like Howard did.

It’s, indeed, hard to see this government holding out with the prospect of electoral defeat — die-hard skeptics, right-wing nutters, neo-lib ideologues, the IPA and mining moguls with bulging campaign treasure chests notwithstanding.

But when politically powerful coal mining billionaires decide the time for action on climate change has come then the end of the age of the climate dinosaurs has truly arrived. 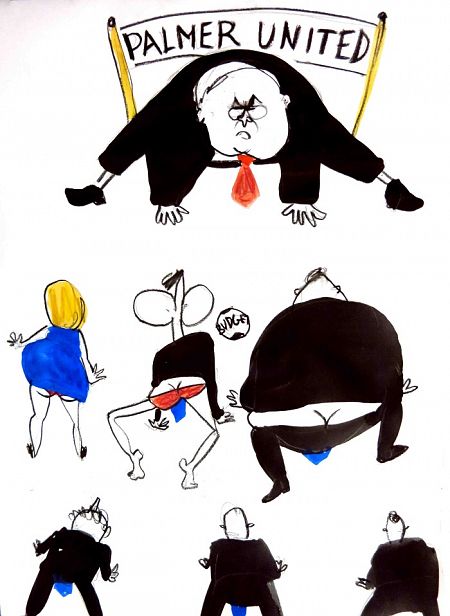