Threats from Pyongyang have as much to do with Barack Obama's Korean Peninsula "Game" Strategy as they do with potential aggression from North Korea, says Murray Hunter. 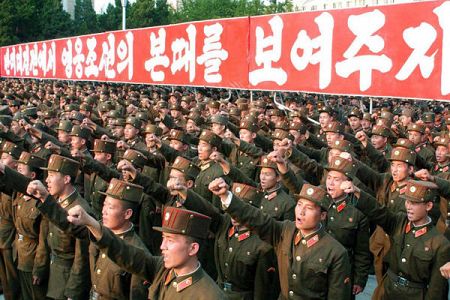 NORTH KOREA is being depicted as an irrational provocateur and aggressor in the escalation of threats and military maneuvers over the Korean Peninsula and, of course, the regime's rhetoric is being used as proof of the intention to wage war. However the events occurring now can also be seen as a continuation of the Obama Administration's "Asian Pivot" strategy, which started with the US President Barack Obama’s visit to Burma, Thailand, and Cambodia in November last year, where he tried unsuccessfully to establish a greater US military presence around the South China Sea over the issue of disputed territories.

Since North Korea's firing of a three stage rocket back in December last year, and the underground nuclear test in February, threats, rhetoric, and military provocations have been rapidly escalating. Early in March, the UN approved fresh sanctions on Pyongyang, where North Korea retaliated through stating that it has the right to stage a pre-emptive strike on the US, as reported by the "western press",.

However, North Korea is not the only country with its rhetoric, the newly elected President of South Korea Park Geun-hye stated that her nation will strike hard and directly against the North's top leadership if provoked.

Then only a couple of days after that, US marines commenced military exercises with Japanese Self Defense forces in Hokkaido. Pyongyang very quickly deployed long range artillery and multiple rocket launchers from bases just across from Baengnyeonydo Island, where many clashes has previously occurred, and told South Koreans in the area to evacuate. President Park loosened the rules of engagement in the West Sea.

Very soon after, during the next couple of days, the annual U.S.-South Korean Foal Eagle joint military exercises, which included 10,000 South Korean and over 3,000 US troops, commenced on the Peninsula.  The Western media portrayed North Korean condemnations of these military exercises as something unexpected, but in fact North Korea had opposed such exercises as being unnecessarily provocative every year they have occurred. Only a few days later, US Secretary of Defense Chuck Hagel announced an increase in missile deployment in Alaska to counter any missile threat from North Korea.

Over the last 10 days, escalation has drastically increased, with navel drills in seas around the Peninsula, B-52s flying over South Korea practicing bombing runs, and then, on 28 March, a precision bombing run over the Peninsula by two B-2 bombers — the most advanced nuclear carrying stealth aircraft in the US arsenal. This was reinforced by Secretary Hagel's statement that North Korean provocations should be taken very seriously.

In retaliation, North Korea cut military hotlines with the South, and soon after said it was entering a "state of war" with the South by cancelling the armistice agreement, where incidentally North Korea has been long willing to sign a full peace agreement, but to date the US has refused. However one must be careful with what the North actually means in their statements, as real meanings can be "lost in reckless translation".

Both sides are also claiming that they are the victims of cyber attacks, adding to the high tensions that now exist.

From the North Korean perspective, these escalations are coming from a country that carpet bombed the North almost out of existence during the 1950 Korean War. More than 5 million lives were lost during this conflict, and the 1950 war started under the pretext of military exercises — just like those that recently occurred. It is reasonable to believe that, in the North, where the threat of military incursion by the US and South Korea has been a real possibility, current military movements are perceived as a real threat to the security of the country. If one was sitting in Pyongyang, one could very easily mistake the current provocations as being preparations for an attack. Both history and Korean military scenarios would tend to support this perception from the North's point of view.

The current "game" scenario playing out on the Peninsula, through these escalating actions, is increasing the risks on both sides. What makes this game scenario even more risky is that the players on both sides don't know each other, as no personal relationships exist. There also looks like no immediate forum of moderation, acceptable to both sides, is available to hold any talks to decrease the tension. Both the Russians and Chinese are urging restraint on both sides. This time round, a number of political commentators are taking the U.S. to task for unnecessarily provoking North Korea.

One may also be perplexed over the current US actions, wondering if their intelligence and understanding of the consequences is fully understood. Any further contemplated escalation could miscalculate the response by the other side and lead to open military conflict, be it minor and localized, or wider over the whole border region. In the past, during the Clinton Administration, wisdom and restraint were shown and military exercises were sometimes cancelled to appease Pyongyang's concerns. So far, no such similar wisdom has been shown by the current administration in this building crisis.

So the next question: is the U.S. game plan is based on a misunderstanding of the consequences, or is it very deliberate?

If one looks at the events going on within the Korean Peninsula within a regional perspective, the real concern of the U.S. might be China. The Korean escalation is a good excuse to build up the US military presence in East Asia, at a time when congressional budget cuts are restricting the deployment and operation of military assets in the region, and some Governments like Japan are even questioning the need to have US troops on their soil.

This escalation will encourage the South to further militarize themselves and don't be surprised if Japan is asked to play a much greater military role in the region, with pressure put on the government to amend the constitution. The Korean escalation will enable more US military assets to be placed closer to China, and create a good excuse for the Obama Administration to cancel cutbacks in military spending in order to take on the "new enemy" of the United States.

This can be seen as a replay of the old strategy of building up a caricature of evil, someone the U.S. loves to hate. With Muammar Gaddafi, Osama Bin Laden and Saddam Hussein all gone, someone is desperately needed with all the abilities required to "wage war on the United States". With the U.S. moving their homeland policy towards domestic terrorism, a new international threat is needed. And Kim Jong-un fits the profile perfectly. Don't worry that the North doesn't have the capacity to make a first strike on US soil. Just like before in Iraq, the details can be glossed over. The 'evil empire' brand was created by Reagan, carried on by Bush is now ready to be utilized by this administration.

The escalation plays into the hands of the Administration, It can ask for more funds to bolster military capabilities in the time of a "threat to the United States".  If granted,  this will enable the allocation of much needed resources to enhance the effectiveness of Obama's Asian Pivot strategy.

One of the ironical things about the Obama Asian pivot strategy is that it is utilizing the same old tools of past administrations. Obama – who portrayed himself as the great peace maker and communicator during the 2008 election campaign – has turned out to be a chameleon. All promises and restraint and even dialogue with U.S... "enemies" has been long forgotten. Obama had espoused himself as the great liberal, but the actions haven't matched the words, and in foreign policy he has done nothing more than continue on with the Bush-Cheney doctrine of aggressive military action.

If one can see what the administration has to gain through this escalation, it is difficult to find reason for any back-down. This game is important to the broad foreign policy objectives of the administration, particularly when the President failed to secure any greater U.S. presence within the ASEAN region during his visit to the region last November.

President Obama would certainly have many supporters today in the US military-industrial complex. One of United States greatest war generals and Presidents, Dwight D. Eisenhower  warned the American people about the dangerous influence of this group in his farewell address.

This U.S. strategy maybe actually counter-productive in bringing any chance of peace to the Korean Peninsula. This military escalation is increasing the prestige of North Korea's new leader and will no doubt increase his military and political powerbase. In addition, the US provocation may strengthen resolve of North Korea's few allies to affirm support, and even win sympathy from others. Given that Kim Jong-un is also very young for a world leader, one of the potential consequences of this escalation is that future US Presidents will have difficulty in engaging in direct discussions with the Korean leader, something absolutely necessary for the achievement of any lasting peace on the Peninsula.

The events of the last few weeks on the Korean Peninsula may be very telling of the style and objectives of this second Obama Administration. The present 'game in play' by the US is indeed full of risk and uncertainty. North Korea is running out of new ways to make retaliatory threats to warn the US of the consequences of playing this risky game. It will be interesting to see how many objectives in the Asia-Pacific region Obama will achieve through this "sabre rattling".

The author hopes this piece shows that there are multiple perspective to every story. The Australian Foreign Minister Bob Carr announced that Australia is considering applying sanction to North Korea. It's a shame that Australia still cannot act independently on foreign policy and consider different perspectives to the one that the United States offers.