Communities continue the fight against the New Acland coal mine despite a growing "Hydra", which includes the fossil fuel industry, the QRC and state and Federal governments, writes Dr David Shearman.

FARMING communities around New Hope's New Acland coal mine are contesting its expansion. But they are being overwhelmed by the "Hydra" — a multi-headed monster comprising the powerful fossil fuel industries, the Queensland Resources Council (QRC) and both the Federal and Queensland State governments.

These communities have fought courageously for 15 years but the Hydra is growing additional heads with Federal Opposition Leader Anthony Albanese and three of his Labor members making statements in tacit or open support of the mine. This raises the question: Have they read the evidence or, like the Federal Government, do they have an ideological commitment to coal whatever the human cost?

So, while waiting for a Hercules to slay the Hydra, let us move from Greek mythology to the medical and scientific facts.

This mine has caused a considerable burden of ill health and distress in local communities since production commenced in 2005. In 2011, air pollution, noise and poor environmental management drove the surrounding farming communities to send details to Doctors for the Environment Australia asking for help.

Despite the publicity and frequent representations to both the Queensland and Commonwealth governments, the pollution continued into 2017, when the issue was taken to the Land Court. The Judgement was 463 pages of condemnation of the environmental regulation, which caused human and environmental harm over 15 years.

Judicial Registrar of the Land Court Member Paul Smith made lengthy adverse statements on, air pollution, noise and the use of water essential to farming communities.

'The principles of intergenerational equity are breached in at least one regard by the proposed revised Stage 3, with the potential for groundwater impacts to adversely affect landholders in the vicinity of the mine for hundreds of years to come.'

Over six years, this company had trampled on the complaints and health concerns of the local residents. Their concerns were ignored by the instruments of government which were supposed to protect them.

Matthew Stevens, in the Australian Financial Review, described the judgment as 'eye-opening and deeply concerning' and an 'unqualified and brutally humiliating courtroom failure' for the New Hope Group.

It is doubtful Matthew Stevens or the many doctors, scientists and lawyers who have perused this evidence can be labelled as "a small group of green activists" engaged in "lawfare", as the QRC media release claims.

The 2017 Land Court judgement was subjected to a complicated chain of litigation and the Judgement was claimed to be biased. In May 2018, the Supreme Court found the Land Court was not legally able to decide on the groundwater impacts of the mine, invalidating its findings on this, as well as intergenerational equity, which was linked to groundwater. As a result, the validity and flow-on consequences for the Queensland Government’s decisions on necessary approvals are now subject to an appeal in the High Court.

Currently, the mine has been fined for 34 additional noise violations and was found guilty of drilling 27 illegal bores. Questions remain over rehabilitation and the long term impacts of this mine on the environment. 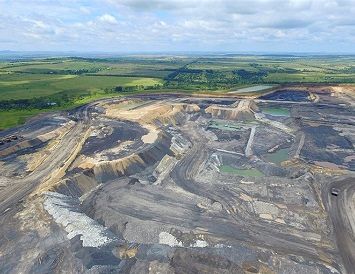 New Acland coal mine: The land that rehabilitation forgot

Coal miner New Hope is in court again, attempting to explain why the State Government should let them destroy another huge chunk of Queensland.

The issue of lost jobs

These thermal coal mining jobs are in an industry that has no future if civilisation is to survive in its present form. By supporting such jobs, the Queensland Government and Federal Labor spokespersons deny that many more jobs – and indeed healthier ones – could be created in the renewable energy sector.

In its support for the mine, the Queensland Government advertises its own inability to develop a transition away from fossil fuels in a state brimming with technological and scientific know-how.

It denies the compelling case for closing this mine on health, environmental and sustainability grounds, when applications by New Hope are now made for more water and the use of more prime agricultural land, in a water-constrained region where agriculture should have priority.

It also denies our climate impact as the world’s largest exporter of coal and gas, which also results in our laggard status in meeting our UN Paris emission reduction targets.

That Federal Member for Hunter Joel Fitzgibbon and Federal Member for Blair Shayne Neumann demand a go-ahead for mine expansion indicates Labor’s current lack of understanding and conviction on both climate and environmental health policy. Climate science demands significant emission reduction before 2030 and Labor, like the Coalition Government, is found wanting.

The position of Labor Senator Anthony Chisholm is egregious. Existing coal reserves are not “fast running out” and only an ideological mindset could disregard the expert evidence of the harms to Queenslanders detailed by medical experts.

Mr Albanese is in a "Humpty Dumpty" position, carefully placed on the wall between, on one side, the Hydra and a mine which exports thermal coal and, on the other side, the environmental sustainability of Australia epitomised by the harms from this mine.

What of the EPBC Act?

The survival of this mine has been courtesy of broken Queensland and Federal legislation. The interim report of the review of the Environmental Protection and Biodiversity Conservation Act (EPBC Act) by the Samuel Committee, recommends more responsibility be devolved to the states.

This proposal ignores their abysmal record of environmental management. The rejection of independence for a national regulator in favour of their operation within the Department of the Environment is likely to assist resource development.

Where to from now?

The courageous Acland communities may have ushered in a decade of legal action to delay fossil fuel development until our governments understand the urgency for emission reduction and environmental sustainability.