New Acland coal mine: The land that rehabilitation forgot

Coal miner New Hope is in court again, attempting to explain why the State Government should let them destroy another huge chunk of Queensland.

The New Hope Group has been mining near the now near deserted hamlet of Acland, at a mine site known as New Acland.

Stage One of New Acland began operations in 2002. Stage Two began in 2007 and the coal from these lease areas is forecast to be exhausted in 2017.

And so New Hope has applied for an approval for Stage Three of New Acland. Stage Three will allow the New Hope Group to go on destroying the area up to 2030 or thereabouts.

All the usual arguments apply to the financial lunacy of opening new coal mines at this time of low prices and flattening demand, but in the case of New Acland Stage Three, the reasons go beyond immeasurable. It is, in short, near impossible to know where to start in explaining why this mine shouldn’t go ahead.

So let's just begin with the numbers, to get that out of the way.

New Acland Stage Three will do twice as much damage as the company reported in its Environmental Impact Statement (EIS). In the EIS, they claim they will produce 455 cubic metres of over- and interburden. Over- and interburden is the rock and soil that has to be stripped away to get to the coal seams.

However, the true amount of over- and interburden will be near double that. Stage Three will involve three open cut pits with a land area of 1201 hectares, and between 60 and 80 metres deep.

Thus, New Hope will dig between 720-960 million cubic metres (Mtpa) of coal, over- and interburden, out of the ground:

The coal – 7.5 Mtpa to 2029, 98 million tonnes if mining starts this year – will be 117 million cubic metres of that and the rest will be then characterised as "mine waste". 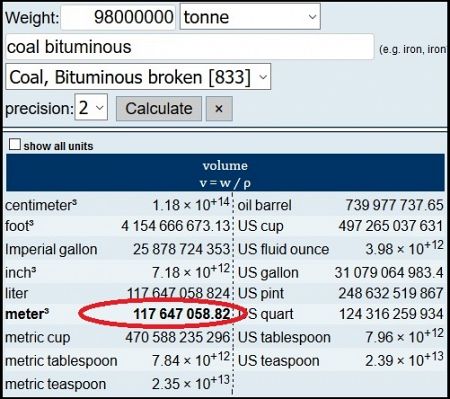 However, the problem here is that when overburden is removed from the ground it expands by about a third in volume, as the HoltCat mining equipment sales website tells us.

This makes intuitive sense, as a cubic metre of soil in the ground is exactly that — a cubic metre, densely packed with no air pockets over geologic time.

Once dug up and dumped on a spoil pile, it clearly falls out into a loose pile, with a new volume – as stated – of about 1.3 times the inground volume.

In the EIS, New Hope say they do what nearly all companies do under the heading of “progressive rehabilitation” and dump it back into the pit it came from, as it says here:

‘During the rehabilitation of mine voids, approximately 396Mbcm of mine waste will be disposed of in pits, with about 50Mbcm placed in out-of-pit spoil dumps.’

These numbers, of course, reflect the incorrect calculations done by New Hope for their EIS. However the other part of the plan, in-pit dumping of spoil is clearly stated.

Eventually, New Hope claims these pits will form lakes and this is crucial because a big part of the EIS for this mine is to do with protecting ground and surface water.

However, as the calculations show, these pits won’t form lakes as the EIS claims, but rather small hillocks or, at best, flat ground. This is a problem because now the whole ground and surface water modeling done by New Hope for Stage Three is invalid.

A lot of the current court case is to do with water flows in and around the mine and its effects upon neighbouring farms.

New Hope says that there will be little or no runoff from the active pit areas of the Stage Three mine site because water will pool in the lakes.

However, as shown, now small hills or flat ground will dominate where once New Hope said would be lakes. 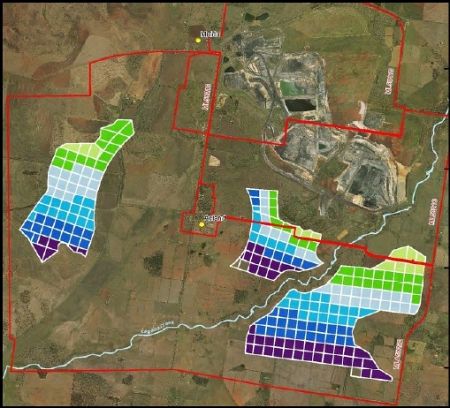 The brightly coloured areas are the mining pits for Stage Three, New Hope says they will form lakes, but the math says otherwise. Thus runoff to Lagoon Creek will be much greater, and likely saline. (Source: Coordinator-General’s report on final EIS)

Runoff is a problem, by the way, because the EIS lists salt as an issue. Weathered mine waste will be saline and so the EIS has listed elaborate ground works measures – contour banks and so forth – to control run off. However, now the projected levee bank heights and lengths are invalid as there will be a great deal more run off from the mine site.

Which brings us to the inescapable point that New Hope need to go back to the start and redo their EIS for New Acland with the correct amount of overburden volumes in their calculations.

Since the pits will not be lakes, collecting water centrally from the mine site and keeping it there, but rather flat ground or small hillocks, then a new EIS is required to reflect these new conditions.

So, while that’s bad enough – the whole EIS invalidated – but then we come to headlined note about the myth of rehabilitation.

Whenever I read a coal company’s EIS for a new project, I invariably have a through-the-looking-glass feeling when I read about the mine closure and progressive rehabilitation plans. Invariably, it is never anywhere near the amount of rehab – if any – that eventually gets done.

And so it is with New Acland.

The following picture shows the state of the Acland mine from Stage One and Stage Two taken in February this year: 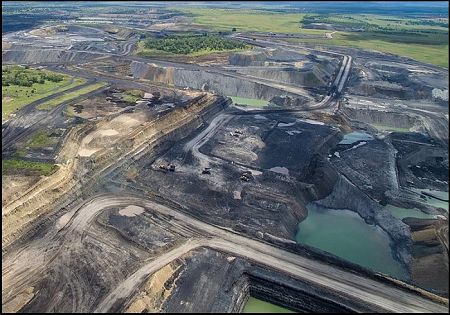 Now New Hope claim to have done 300 hectares of rehab somewhere in this area.

Neither can I, however this is what it says on the company website:

‘The company manages the progressive rehabilitation program that forms a central aspect to the sustainability plan for New Acland. At any one time, only 10% of lease area is actively mined. More than 300 hectares of land have been rehabilitated and returned to cattle grazing land.’

Turns out the rehab in question is of the fringe lands which is the easiest, low-hanging fruit of the rehab process.

The active pit areas of Stages One and Two have clearly not been rehabilitated in any form, once more giving the lie to this “progressive rehabilitation” nonsense.

The area of the pictured blasted heath is about 570 hectares. 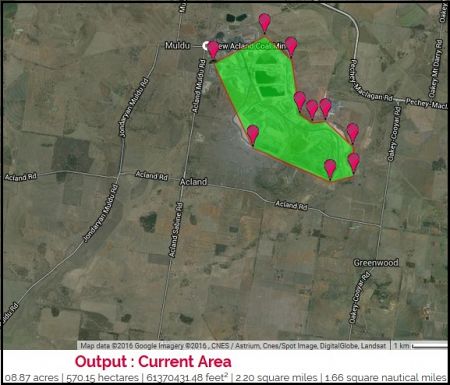 Given the current state of world coal markets, it is unlikely that New Hope will be in existence in ten years, let alone still being in business in 2086 completing the rehab on Stage Three.

No, the Queensland Government have to send New Hope back to the drawing board to do their EIS for Stage Three again.

And an even better idea is before granting approval to start mining on Stage Three, New Hope should have to fully rehabilitate the appalling desecration of Stages One and Two before they are allowed to mine a single tonne of coal on the next stage.