The third independence referendum set for New Caledonia on 12 December was to be like the last two referendums in some of its main features — but this time had worrying differences.

In the basics, the indigenous Kanak movement, as both a political and cultural movement, was positioned to get out a huge and solid vote among its own people — but just short of the majority it needed.

New Caledonia’s politics divide on the lines of Indigenous and left-wing versus “European” French and right-wing.

Not completely, but with a high per capita GDP, close to Australia’s, heavily due to lucrative nickel exports, most of the non-Indigenous population get a decent share of wealth and tend to be conservative.

In the event, 2021 would see a return to dangerous times when the Indigenous Kanak community, declaring themselves excluded, stayed away.

As the results became known, turnout was down to 43.9%, meaning the no vote was carried by 96.49%. This took New Caledonia back to the one-sided, boycotted referendums held in the 1980s, the results of which were  abandoned after the outbreak of violent conflict — giving way to the Matignon Peace Agreement and 40 years of peace.

What now? French President Emmanuel Macron, who had changed an earlier “arms length” stance to bring on the referendum one year ahead of schedule, to get it settled, declared that a transition period had started, with all interests expected to work together. That may not be too likely with the Kanak leadership now put into a very dark frame of mind.

Kanak political leaders have made a point of demonstrating skills in governance and negotiation, being active in a power sharing government over the last 30 years and never more than a few seats short of an absolute majority in the parliamentary assembly in Noumea. The Kanak Party, the FLNKS has provided the incumbent territorial President, Louis Mapou. 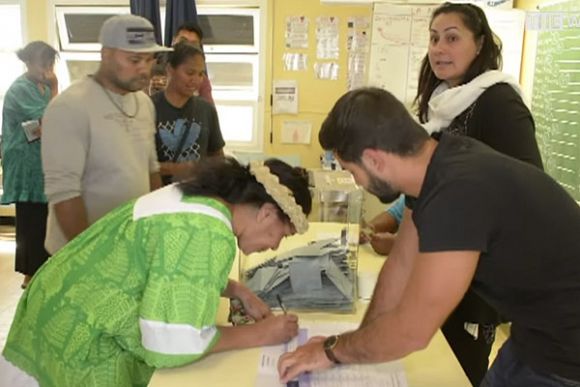 New Caledonia again votes ‘No’ — tension in the air

Two expectations marked the lead-up to the independence referendum in New Caledonia: it would be another “no” and bad feelings would follow.

Their position, however, has always been plain: the exercise in “cohabitation” in government has been to prove up and demonstrate their skills in modern government, just so that they could manage full independence — always adamant on that demand.

They have formally promised to guarantee the rights of the European French to stay on as citizens of an independent republic and also a close association with the French state.

At this time, New Caledonia already has sufficient autonomy to legislate for itself on all aspects of government except in the areas of military and foreign policy, immigration, police and currency, which are retained by metropolitan France.

France supports the territory budget with AI$1.5 billion each year, but will only commit to continuing that for a three-year transitional period if New Caledonia goes independent. This is a burning issue, where the Kanak side demand an open-ended assurance of funding and the anti-independence parties can argue independence will mean bankruptcy.

The long period since the initial 1988 Matignon Accord has seen both sides keeping the peace and exercising give-and-take, with two main concessions, somewhat begrudgingly conceded by the “Non” side.

A special electoral roll for the independence referendums imposes very tight residency and heritage standards, meaning many long-term residents and members of old settler families do not get a vote. There is a second “handicap” system where any “Oui” vote would say yes to outright independence, whereas the “Non” votes in 2018 and 2020 just cleared the way for the next referendum to take place — 2021 being the one to settle the principle of yes-or-no, but with still more talking and voting scheduled to follow. Some 185,000 vote amid total population of 270,000.

That is the way it has been and was set to be.

But this year, the Kanak leadership called for postponement of the referendum until September, saying the loss of life through the pandemic, with 300 dead in New Caledonia in the latter part of 2021, had committed people to long periods of mourning and cultural practices that would prevent them going to the polls.

Talking of imposing a boycott, then to claim the result of the referendum was not legitimate, they took the matter to the courts in France, with reports by mid-week – four days out from polling day – that they had been knocked back. 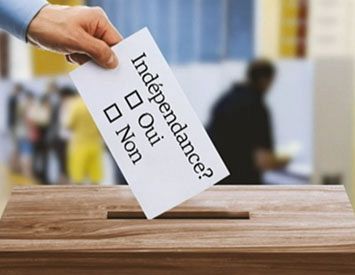 They also sent delegates to try and make the case at the United Nations in New York.

The French Government has argued that notwithstanding a surge in cases with the Delta strain, and Omicron lurking, the health services have COVID-19 under control in New Caledonia.

A second difference from the last two referendums was to be seen on the streets: no campaigning on the previous scale with big rallies. This was caused by restrictions imposed by COVID-19 and by the Kanaks’ withdrawal from a vote they considered unfairly set up.

Then there is the difference in the South Pacific region.

The neighbouring independent states, especially ones such as such as Papua New Guinea, Solomon Islands and Vanuatu in the international body, the Melanesian Spearhead Group, have not ceased pressing for New Caledonia to be “set free”.

They have developed relations with China, a major rival of France in its role as a guarantor of “security” in South Pacific, (and incidentally, chief customer for New Caledonia’s nickel exports); and may get benefits from a new security initiative by the European Union.

France has until now worked closely in the area of defence and regional strategy with Australia and New Zealand, as a spin-off positioning itself as a supplier of sophisticated weaponry across the Asia-Pacific.

The breakdown of relations with Australia over the cancellation of their major submarine building contract, AU $90 billion, is seen as both causing a damaging split in the alliance and bringing on a hardening of attitudes in Paris on the independence question.

As that argument goes, to assert its position in the region, the French Government would need to demonstrate it has strength to enforce its decisions. 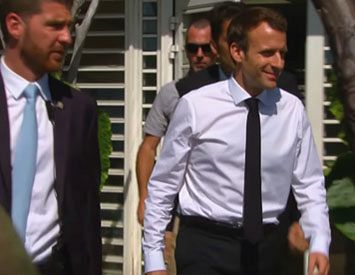 Things may be coming to a head over the coming New Caledonia referendum, but there’s only lukewarm interest in France itself

Many Kanak people, especially among the young, sense their disadvantage as among the poorest in their “own country” and demand nothing but full independence.

None show any taste for a return to the Évènements, the conflicts between 1984 and 1988 that brought the territory close to civil war, but still fear there is fertile ground for it.

On the main island, Grande-Terre, Kanak villages, the tribus, are concentrated towards the north, where public order is kept by the paramilitary Gendarmerie and where bad relations with the public can degenerate into violent confrontations with angry crowds.

Burgers in the South including Noumea, home to most of the European population, patrolled by the National Police, worry about trouble at night, break-ins and car stealing, often and pressingly reported in the local press.

Along with 200 electoral officials flown in for the referendum, 1,400 additional police and soldiers, with helicopters and armoured cars, have been deployed.

Kanak office holders have said they would regard the refusal to postpone the Sunday referendum as a “declaration of war” — if not in a literal sense, perhaps to say, they cannot always hold the line against a violent response.

On all precedents since the end of the Évènements, where they played a major hand in the settlement, they may succeed again in keeping it peaceful.

The “Project” as it is called, to follow up a “no” vote in 2021, is to embark on new rounds of talks, for a settlement on the future. What power sharing? What guarantees? What possibility for revisiting the independence question at a future time?

If that can be agreed on, if the niceties can continue to win out over the passion and frustration, it would go to a fourth referendum, on all the arrangements, in 2023.