MUNGO MACCALLUM: The future of the COVID-19 economic stimulus

If this isn’t the dreaded second wave of COVID-19, it will do until the real thing comes along.

Which leads immediately to the question: are we ready for the second wave of economic stimulus we will need to ameliorate it? And the answer is, unfortunately, almost certainly not.

For weeks, months, Prime Minister Scott Morrison and Treasurer Josh Frydenberg have been assuring us that JobKeeper, JobSeeker and all the rest of them are on-off programs, strictly limited and temporary.

But this thinking was predicated on the idea that coronavirus was also a one-off, a limited and temporary infection that could be contained and shut down within a maximum of six months.

As we have seen, not only in Victoria but around the world, this was far too optimistic. COVID-19 is roaring back in all its former ugliness — perhaps even worse.

In recent days Morrison and Frydenberg have been making conciliatory noises about tweaking some of the more vocal claimants for assistance – notably in tourism – for a bit longer than they anticipated. But with virtually an entire state in lockdown and the smashing of revenue that will entail, something considerably more ambitious will be required.

And if the second wave spreads across the borders of the cabbage patch state, a likelihood which only the incorrigibly sanguine think can be avoided, our resident miracle-worker Morrison will need to find a few handy rabbits to produce from what his trusty assistant Frydenberg has shown to be an absolutely empty hat.

Frydenberg, as ever, is reassuring, promising full economic support for his home state, whatever that means. But encouraging words will not be enough and it is clear that he, in common with just about everyone else, has been caught short by the speed and virulence of the new outbreak.

Victorian Premier Daniel Andrews acted decisively and drastically, locking down nine housing commission blocks and their 3,000 victims but the infection rate continued to accelerate. Almost immediately he upped the ante to more than five million across the Melbourne metropolitan area and beyond.

But his initial reaction smacked of unprepared panic. As Deputy Chief Health Officer Paul Kelly (the one who does science, not music or pomposity) pointed out, the towers were like vertical cruise ships — sealed environments in which close contact was inevitable, petri dishes in which the virus could flourish.

So it did and Andrews was stuck with the problem of what to do with the mounting toll when the first lockdowns of five days (nowhere near the incubation period for the disease) had elapsed. But the problem solved itself. The internees in one tower remained in solitary, but the others were allowed to join their fellow inmates in limited detention, under the less onerous restrictions.

Meanwhile, the rest of the country was similarly bemused. All the other states and territories reacted with various degrees of alarm, and all took steps to effectively isolate Victoria. In New South Wales, Gladys Berejiklian appeared almost paranoid, switching from staunch opposition to border closing to draconian implementation where Victoria was concerned. 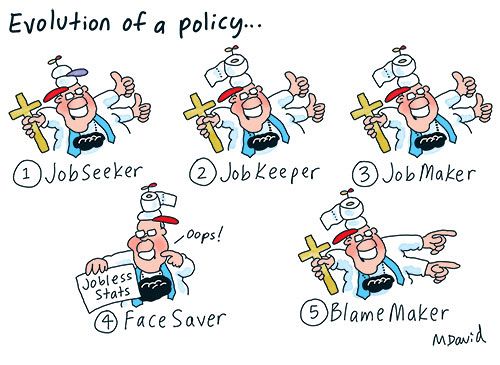 Is this another JobKeeper bungle?

After an initial $60 billion bungle, the JobKeeper figures still don't seem to be adding up.

She had her reasons; between them, the two big states cover well above half the total economy of Australia. If the second wave crosses the Murray and similar shutdowns need to be imposed, the consequences will be horrendous.

And for Morrison, after days of muted self-congratulation over the country’s relative success in suppressing the pandemic, the backdown will be at least equally embarrassing. The September cut off of government aid must now be considered inoperable, but the alternatives are hard to come by.

Morrison, always the marketeer, is talking about the old standby of tax cuts, bringing forward the measures already legislated. But this knee jerk reaction. if it eventuates, will be far too little and too late. The cuts Morrison is pondering involve just a dollar a week for low incomes and would not start until July next year.

If genuine help for consumers is to be tried, a big hit, like that devised by Kevin Rudd and Ken Henry, the person that kept us out of recession over the Global Financial Crisis (GFC), would be needed. But Morrison can’t afford one, and in any case, it goes against his instincts — he has always been more interested in boosting the supply side.

So, perhaps more company tax cuts will be on the table.

But that too would involve considerable lead time to be even marginally effective, and time is what Morrison – and the rest of us – have not got much of. Tax cuts, if they are on, will presumably not be announced officially until the October budget, although it is a safe bet they will be strategically leaked well before then.

But in any case, the real action will have to be on July 23, when the big reset is due, and Frydenberg has promised a review of how we are going so far. The spin, of course, is that we are right on course, the economy is looking at a picture: that business will be humming back before you know it.

The truth, however, is likely to be more than somewhat less rosy. Frydenberg is resigned to preserving some form of assistance — cautious, targeted and of course temporary. But sooner or later he will have to face the crunch. Whether COVID-19 persists or not, either the stimulus must continue indefinitely and to hell with debt and deficit, or it will cut off, risking closures, bankruptcies, unemployment and prolonged recession.

Even The Australian is gloomy at the prospect. Drawing breath (through a mask, we hope) from the constant lambasting of Victoria in general and premier Daniel Andrews in particular, the national daily The Australian unleashed its editor at large, Paul Kelly (the one who does pomposity, not science or music) to offer a different diatribe.

Under the heading 'Recriminations splitting our unity when we most need it', Kelly chided that divisions were a threat to economic recovery.

Presumably, Kelly does not read his own paper. And who can blame him?