WHILE THE PM was scratching around for some talking points that would take the heat off his Government’s failures, the news this week is flooded, instead, with the sad and untimely death of Labor Senator Kimberley Kitching, which is being blamed by the media on internal party bullying.

Before we examine this latest ALP "bullying" beat up, it’s important to note that the use of someone’s death as a political tool – regardless of the veracity or otherwise of the backstory – is a disgraceful act. To politicise this event even before the late Senator’s body was in the ground, is simply heinous.

Of course, this has not stopped the Prime Minister, enabled by his ever-willing mainstream media publicity department, from having a field day, with this current media fixation providing a convenient vehicle to attack the Labor Opposition.

As the Federal Election looms, there is no doubt Coalition parties are on the nose. This has been ably demonstrated by many months of poor Federal polls and by the most recent annihilation of the Liberals in the South Australian State Election.

And while we are inundated with opinions from ex-Labor MPs, the usual far-Right commentators and even former Liberal MP Amanda Vanstone being rolled out to provide her two bobs’ worth, the many ways in which the Prime Minister and his band of ineffectual, if not downright corrupt, ministers have failed flood-affected communities, for example, are not being scrutinised.

This is despite the fact that thousands upon thousands of flood victims are currently still homeless, without adequate food and water, or sanitation, three whole weeks after catastrophic floods wiped out their entire communities.

Or, that a $5 billion disaster fund that could assist their plight sits untouched.

This is also notwithstanding the Government’s earlier, criminal negligence of fire-affected communities, from which many victims are still homeless two years on.

Meanwhile, the establishment media is similarly not focused on the Federal Government’s abysmal failure to address climate change, which is undeniably leading to more extreme weather events with every wasted week.

Nor are the Morrison Government’s media disciples examining diabolical debts and deficits incurred under ten years of Coalition Government, the eye-watering levels of which would have seen the end of any Labor government long ago.

And, as thousands of people express their anger with the Morrison and Perrottet governments by not risking another term of Liberals at any level, it is not even the humiliating loss of the Liberal Government in South Australia, which has captured the media’s attention. 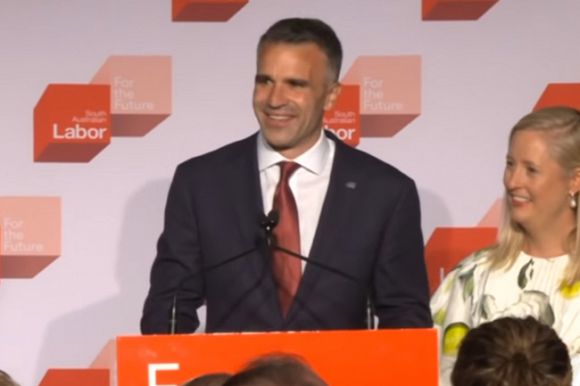 There's more to the SA Labor Election victory than you think

Labor's victory in the SA State Election was won not just from a vote against the Liberals, but on a strategy based around the interests of the people.

If there is one thing the Coalition is good at, however, it’s politics. Specifically, attacking opponents, skillfully assisted by its relic media partners, has become a superpower of sorts for Liberal and National parties Australia wide.

And the convenient focus on the Labor Party and whether or not bullying has ever occurred within its ranks has taken the heat off the Morrison Government, whose loss of popularity is a direct consequence of its dismal record in government.

THE BEAT GOES ON

Some “news” reports have even gone as far as to suggest that it was bullying that led to Senator Kitching’s death.

Since Morrison took over as PM, the Coalition’s already established “problem with women” has blossomed into an unrivalled circus of misogyny. This has been well documented on IA and pretty much in every news publication, given the evidence has been too weighty to ignore, even by the loyal Morrison Government Fourth Estate representatives.

It is exceedingly convenient for the Morrison Government, then, that Senator Kitching is unable to confirm or deny the existence of Labor Party bullying, which is said to have been inflicted by other “mean” female coworkers. But even if such bullying, as opposed to the usual cruel and merciless political machinations in every political party room, had occurred, implying it “killed” someone who died of a heart attack, is surely a stretch, if not downright absurd.

And, while obviously premature in this case and, of course, sad, deaths by heart attack are hardly unusual, with coronary heart disease providing the primary cause of death for women in Ms Kitching’s age group.

Nonetheless, emboldened by the lack of any evidence to the contrary, Morrison, while managing to keep a straight face, accused Opposition Leader Anthony Albanese of going "into hiding" for not calling an inquiry into claims of bullying following Kimberley Kitching's death.

Warming to his tale, the PM said:

"What we've got from Anthony Albanese at the first sign of hard questions, and we're not even into the campaign yet, he has gone into complete hiding. Frankly I think it's pretty gutless."

Scott Morrison given another platform to use Sen Kimberly Kitching's death to whack Anthony Albanese who he says is 'in hiding' & is 'gutless'. PM declares facing up to issues & claims to have 'made the system better for all the parliament'. #auspol pic.twitter.com/qCDuqf8Tpi

This, from the man who refused even to read the dossier sent to him by the alleged victim, which detailed rape allegations against Christian Porter, before pronouncing the Attorney-General “innocent”, without an inquiry of any kind.

This, from the PM and the Cabinet that ignored the rape of Brittany Higgins, snubbed Grace Tame from meaningful discussions, refused to meet with women protesting against sexual violence and covered up every seedy act by its ministers, booking empathy training in place of any disciplinary action.

This, from the man who was forced to apologise for the “terrible things” that happened in Parliament including a culture of bullying, abuse, harassment "and in some cases even violence”.

This, from the Government that mocked women everywhere by producing a logo for its Women's Network featuring an obviously phallic, cursive "W" with a purple protuberance — no doubt in homage to its very own Big Swinging Dicks Club.

Should the man who was, in fact, too gutless to face the victims of the flood catastrophe, who are still living in apocalyptic conditions, be pointing an appendage of any kind at others?

As mentioned, the approach of using its own weaknesses to undermine the strengths of its opponents is an oft-employed and historically successful political tactic by the Coalition, dating back to the Howard era.

In this way, any suggestion of a crack in the “enemy’s” armour, in this case, suggestions of Labor Party bullying, is amplified to such a degree that the spotlight moves away from bigger concerns, providing fodder for the willing media and creating a false sense of equivalency. Let’s not fall for it again.

Dozens of Australia’s top emergency chiefs have taken aim at the Federal government, claiming they warned them about the floods that devastated New South Wales and Queensland months before they happened. Former NSW Fire & Rescue Commissioner @Greg_Mullins joins us.#TheProjectTV pic.twitter.com/V9sr0aTJxo