Trade with Australia has been boosted by the recent global boom. But how much of this record export wealth is staying in Australia? Alan Austin reports.

THE CURRENT global economic boom has led to one of the greatest export surges in Australia’s history. It is one of the strongest trade outcomes in the world today. Unfortunately, more of the proceeds than ever are going to foreign governments and rich investors offshore. Australians are losing badly in the current extraction of valuable resources.

So how much wealth is being shunted straight offshore for free? Can we get an idea of the quantum?

The Australian Bureau of Statistics (ABS) has released monthly trade data going back to the McMahon Government era of 1971.

Over that period, Australia has enjoyed dramatic trade booms five times. By boom we mean the value of exports going up by more than 45% in a three-year period. Four of them were accompanied by impressive import booms.

By examining these, we can get a pretty good idea of the gains to Australia back then — and the losses today.

(Please note that the blue bars in the following charts represent months. The calculations in the article, however, are made on financial year totals to eliminate short term fluctuations. Data is from ABS file 5368.01, total goods and services imported and exported, seasonally adjusted. Charts are from tradingeconomics.com.)

For those three financial years, exports reached an unprecedented $39.0 billion. Every dollar of this was matched by imports, which totalled $40.5 billion. So all the wealth gained by selling minerals, wool, meat and other commodities improved Australian lives. Plus some.

The third was from 1982 to 1985 when exports rose 51.8%. Imports exceeded exports by more than 13% over that period, reflecting a strong domestic economy as well as buoyant trade. This followed several substantial economic reforms, including the Prices and Incomes Accord. Retail sales increased by an average of 8.5% per year. This confirms the exports benefited virtually all Australians.

This third boom was a beauty. It continued at that steep positive incline right through until the financial year ending June 1987. Exports grew over the five financial years from July 1982 to June 1987 by an impressive 87.5%.

Retail sales increased over that five-year period by an extraordinary average of 9.1% per year, proving to Australia and the world how an economy should function.

There was a bit of a gap then until the fourth boom, from 2004 to 2007, when exports increased by 48.7%. Again imports exceeded exports by more than 10%, confirming global trade enriched the community greatly. Annual retail sales increased over that period by 5.0% on average.

The fifth export surge began in 2016 as the whole world enjoyed robust recovery from the global financial crisis. By the end of the financial year just ended in June this year, the three-year increase in export values reached 47.4%.

Now, here is where it gets bizarre. Over that three year period of impressive exports growth, imports increased by a puny 18.0%. Instead of imports being substantially higher than exports, as in every other boom, they were much lower. By 7.3%, in fact. Retail sales suffered the worst three years of annual growth on record.

The relationship of imports to exports

Throughout history, the quantum of Australia’s exports has been closely matched by imports. Until the last three years. 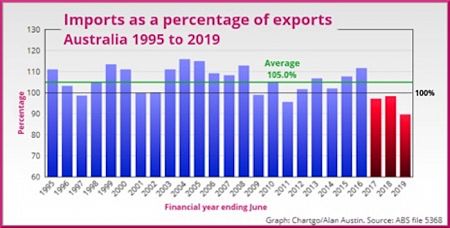 Over the last 25 financial years, imports have been higher than exports 18 times. Imports have averaged 105.0% of exports. Only four times has the ratio of imports to exports been below 98.5%. Three of those four are the last three years.
So now, for the first time, export earnings no longer enhance the lives of all Australians.

So where has all this incredible wealth gone, if not to imports?

To pay off federal debt, which the Coalition has more than doubled? Not at all. Gross debt last Friday was $560.1 billion. Another all-time high.

To repay private debt? No. Households debt to GDP has been stuck at around 120% since 2015.

To wages? Nope. Average weekly earnings this year are up just 2.7% on last year. Inflation is at 1.6%.

To welfare beneficiaries? Negative. Australia is tracking close to last in the OECD on generosity to welfare recipients.
To fund the national disability scheme? Frayed knot. This is seriously underfunded.

The sorry conclusion is that much of the wealth is now sent straight offshore. More than ever before, beneficiaries are the foreign corporations which extract the commodities and the customers who buy them. The mechanisms for this transfer were listed here last week.

This country should b rolling in wealth right now but multinationals get to pocket it offshore, thanks 2 this govt. They then look 4 surplus & penalise NDIS needlessly. The ineptitude of this govt | https://t.co/NKzpcCQPva @IndependentAus

Here’s a quick calculation. Over the last 25 years, Australians have spent 105.0% of export values buying imports. Last financial year, exports totalled $470.4 billion. So, under any previous government, Australians would have been able to spend 105.0% of that – which is $493.9 billion. Instead, only $420.2 billion was imported. That’s a shortfall of $73.7 billion. In just one year.

Is that the annual drain of wealth to offshore predators under the current administration? It appears a valid estimation. This is in the same order of magnitude of the losses to the budget suggested by analysis of the Tax Office’s transparency reports. It is the quantum suggested by the dramatic drop-off in retail sales under the Coalition.

It is consistent with the current debt blow-out. In 2016-17, the Turnbull Government with Scott Morrison as Treasurer added $80.6 billion to the gross debt. Already this financial year, just since June 30, they have added $18.1 billion. In 12 weeks. That’s an annual rate of $78.5 billion.

It is consistent with research showing the world’s richest one per cent getting richer while the bottom half is getting poorer.

We shall update this figure as further data emerges. But for now, a tentative estimate of the loss of wealth offshore following the Coalition’s changes to the economic settings is $73 billion. Every year.

“The top 20 per cent of Australian households in wealth terms, are now 100 times richer than the bottom 20 per cent- 50 years ago we would have thought that was abhorrent.” Hugh Mackay says Australia has the largest wealth inequality in its history #TheDrum pic.twitter.com/JujfRdAYfE

THE MARVEL? WHAT PYGMIES THEY ARE - WHAT A SMALL, CULTURELESS BUNCH The Coalition now serves foreign corporations first and foremost https://t.co/Rfs2gZ3mLh @IndependentAus