He doesn’t care, just as he doesn’t care that Palestinian children are being killed by the Israeli air force and army.

If he cares at all, it is because he thinks believers of the Old Testament are under attack.

China for Morrison is a domestic issue. He demonises the country in the hope that the tradies and suburban voters will agree that China is a danger to Australia and that they will vote for him. Otherwise, he knows nothing about China, only that it is positioned north of Australia.

It is doubtful that he could name the states that border it; he hasn’t got a clue.

The Australian Strategic Policy Institute (ASPI) says we may soon find ourselves at war with China. Some of the sources of its information are U.S. right-wing "think tanks", funded by U.S. arms manufacturers. ASPI has taken to publishing threat assessments by retired U.S. military officers.

It is no longer concerned to hide its bias. And as disciples of ASPI, Minister Peter Dutton and public servant Mike Pezzullo slammed another nail in the coffin of the relationship with a recent left-field claim that war is imminent. It’s not.

China does not, and will not, go to war over Taiwan. The irresponsibility of Dutton and Pezzullo is playing to domestic anti-China sentiment fanned by the Murdoch press for electoral advantage.

The only way war will occur is if the U.S. engineers it as they "justified" war with North Vietnam by engineering the Gulf of Tonkin incident. But this time around, they are justifiably wary of the considerable military power of the Chinese.

What ASPI and the Australian Defence Department have not done is to spell out the reality of Australian participation in an U.S. fostered war with China. One gets the impression they don’t know and don’t want to know.

There have been no war projections published. No force comparison in the event of hostilities, no discussion of casualties, targets, supply and resupply, interdiction of supplies and the prospect for the use of nuclear weapons.

It is almost as if ASPI is talking up the prospect of war to promote and aid the sale of U.S. weapons. In any case, from Morrison’s perspective, it helps his prospect of re-election. When it comes to the realities of war Morrison, is way out of his depth, lacking the experience and emotional intelligence to get his head around what it might mean. It is a useful tool in his now-familiar domestic posturing.

Morrison relishes the notion of being the cop on the block for the U.S. In 2003, President George W. Bush referred to Australia as the U.S. Deputy Sheriff in Asia. Howard puffed himself up only to have his bubble burst by criticism from Indonesia and Malaysia.

Similarly, no one in the region takes Morrison seriously. In fact, Morrison’s clumsy and inept diplomacy toward both the U.S. and China have alienated him from the region, as increasingly nuanced moves are made to manoeuvre between the edgy superpowers. 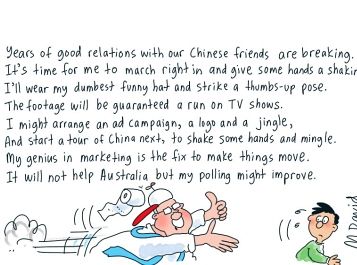 There is no reasonable explanation for the deterioration in the China-Australia relationship. The Government has not adjusted its thinking since the departure of Donald Trump. If anything, it has become more hard-line, such as cancelling Victoria's memorandum of understanding (MOU) relating to its Belt and Road Initiative (BRI) with China.

This decision came exactly 12 months after Morrison accused China of fostering COVID-19 through the so-called wet markets of Wuhan and unilaterally calling for an international investigation. In retaliation for cancelling the BRI MOU, China suspended the China-Australia Strategic Economic Dialogue, setting the scene for further deterioration in relations.

However, the impact has been hidden from the Australian public by unprecedented levels of borrowing necessitated by COVID.

Such is the economic folly of the Coalition, particularly the right-wing ideologues, that they refer to trade with China as "dirty money" and argue a case that Australia can survive without Chinese trade. They claim that new markets have already been found for barley and wine.

Australia has acquiesced to American pressure to increase its defence presence in the Northern Territory. It is considering rescinding a 99-year lease the Chinese company Landbridge has with respect to the port of Darwin. The narrative of Chinese "aggression" toward Australia provides justification for "taking on" China and the U.S. is happy enough to encourage the "Deputy Sheriff" to swing the lead.

We do their dirty work and they gain trade opportunities at our expense. 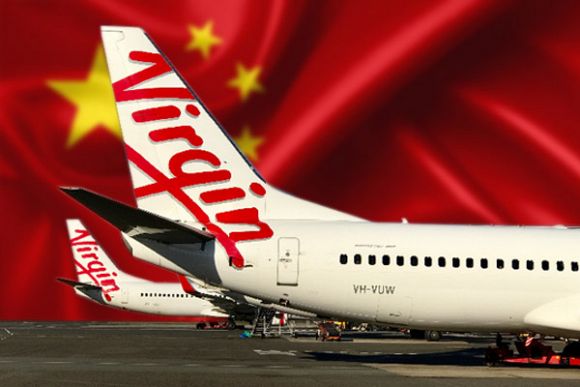 As a diplomat for 25 years and student of politics, I have never seen such an inept and corrupt and government. Those around Morrison in government and the public service who seek promotion and preferment mirror his negative anti-China attitudes and statements.

China has reinforced and, to an extent, justified and legitimised the paranoia of Morrison and his Government with tough trade sanctions, which has assisted his domestic standing on the issue of China.

Fearing the wedge, Labor has ducked for cover and run up the white flag. Labor Leader in the Senate, Penny Wong, agreed to launch the book of anti-China journalist Peter Hartcher on 17 May.

Australia needs help. It is being played by the U.S. It is suffering a dearth of leadership that is unable to handle climate change, a coherent COVID vaccination rollout, quarantine and a balanced relationship with China, our biggest and most important neighbour.