The only argument offered for Australia's harsh refugee policies is that it stops others getting on boats — but is that morally acceptable? Melbourne University Professor of Philosophy Tony Coady considers.

WHEN DEBATE about refugees ascends from slogan swapping (“stop the boats”, “bring them here”) to specific reasoning, there seems only one argument worth considering for the ignominious detention of asylum seekers on Manus Island and Nauru and the refusal to ever settle any in Australia.

That argument, advanced by both the Government and the Opposition (occasionally in a less strident form), stems from deterrence. It’s worth considering the argument even as a handful of these detainees are resettled in the U.S. or possibly other distant and politically ambiguous destinations.

Deterrence involves an action or policy designed to instil fear of the consequences of committing some other action. But there are considerations relevant to the assessment of deterrent measures, especially when those measures inflict pain, damage or harm on some to deter others.

One is the measures’ likely success. Another is their independent moral acceptability.

Another concern is the acceptability of the purpose for which deterrence is employed — that is to say, why is it good to stop the boats? This opens up too many questions to be dealt with here, so assume (what would otherwise be questioned) that the purpose is a good one — for example, stopping deaths at sea. It will rather be the morality of the means (deterrence) that will concern me.

First, the harm issue. It is clear the offshore detainees suffer deliberately inflicted harm from their incarceration. This is so even if we manage to suspend judgement on how extreme that harm is — something made even more difficult by a variety of dramatic and credible testimonies.

Even if detainees are not humiliated, beaten, raped, murdered, or had their health and education gravely neglected, they are effectively and indefinitely imprisoned and often separated from family and friends. This last is usually a profound human harm though less immediately palpable than some others.

As for success, there is room for debate since the associated policy of turning back the boats is already sufficient to deter future boat people and smugglers, or at least stop them landing here. If so, the infliction of serious harm on the refugees through indefinite detention is unnecessary and hence immoral.

In any case, even granting the success of extreme incarceration, there remains the fact that the efficiency of the policy to the desired deterrence outcomes does not justify “whatever it takes”. It may be that the most morally monstrous actions might work as deterrents but be unacceptable morally, even to the most casual conscience.

Consider the suggestion we should have deterred further refugees from embarking for Australia by taking a selected group of mothers and children from the earlier arrivals by sea and publicly executing them.

This has the merit of almost certain success and avoiding the extravagant financial cost of offshore detention. But I believe this measure, whatever its success, would strike most Australians as morally repellent.

One reason for the dubious nature of severe deterrent measures is that the morality of deterrence is most at home when those harmed to deter others are guilty of some crime or offence themselves and when the harm is proportional to the offence. This is precisely how deterrence is offered as a (partial) defence of the legal imprisonment of offenders, or more dubiously of capital punishment.

Certain forms of guilt can lead to deprivation of rights, such as imprisonment, and this in turn allows that deprivation to function as a deterrent to others. But asylum seekers are not guilty of any legal or serious moral offence — merely, at most, of irregularity in entering the country.

In any case, execution would be disproportionate to such irregularity, especially when that irregularity is legitimised by international law.

Nor is the situation much changed if, instead of killing them, we had them publicly tortured.

Perhaps, aside from waterboarding or electric shocks, we might try more subtle tortures like separating parent from child, inducing despair by isolating refugees in demeaning conditions on remote islands with no hope of anything like a normal life, and ensuring inadequate access to life-saving medical treatment or educational improvement. And instead of a selected few, we could do it to a large number of those who had arrived seeking refuge from disaster.

We could endeavour to make this policy secretive but just public enough to make deterrence work, while softening the effect of any moral outrage at home by rejecting our responsibility and shifting it to the governmental authorities on those islands and a variety of largely unaccountable private security companies.

Again, this is morally repellent and impossible to justify ethically. But that’s more or less what Australia has been and is doing on Manus Island and Nauru. And that is not a morally permissible resort to deterrence.

Tony Coady is Professor of Philosophy at the University of Melbourne. This article was originally published on The Conversation under the title 'We cannot rely morally on ‘deterrence’ to justify our harsh refugee policies'. Read the original article. 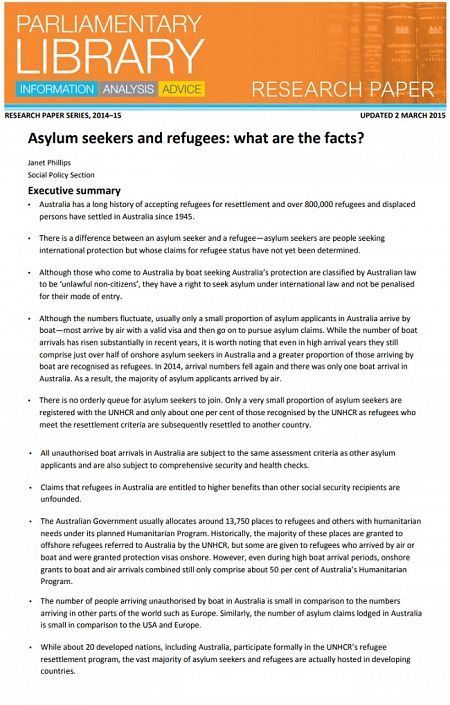