Tony Abbott has shown himself to be a low-rent clone of Mark Latham, says senior correspondent Barry Everingham. 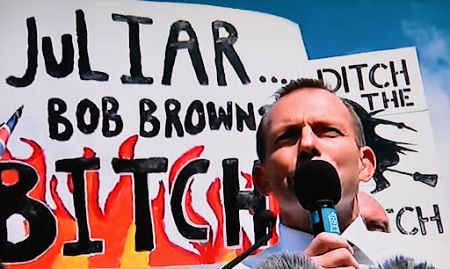 MARGIE Abbott’s public endorsement of Tony and his attitude to women was misplaced. Of course, as his long time and obviously loving wife, she thought she was doing the right thing ― and if she wasn’t such a strong and honourable woman, it might have worked.

However, all that happened is that it underscored what a weak and ineffectual leader Abbott really is and his disgusting performance in the  National Parliament yesterday only confirmed what many people already think ― that he is a low rent clone of Mark Latham. Of course, at least Latham punched other blokes ― not the wall on either side of a woman's head.

Julia Gillard took over where Margie Abbott left off, and she had every right to be furious by Abbott’s not too subtle use of the phrase Alan Jones has made unspeakable by decent men ― “died of shame”. Talk back radio today in Melbourne contained seething references to Abbott and the way he holds Jones in thrall. And Ms Gillard yesterday said it all, when she launched her attack on Tony Abbott. Meanwhile, his body language while she held forth was telling; a sneering half smile, accompanied by a shake of the head, indicating: “say what you like, bitch ― makes no difference to me”.

Abbott is drop kick. He's not fit to lead an Opposition, even one which includes such shocking people like Sophie Mirabella, Christopher Pyne, Cory Bernardi and Eric Abetz, to name but a few. Tony Jones was amiss on Monday night’s Q&A by not hauling Pyne into line as he continually spoke over Kate Ellis, as did the egregious right wing ratbag Piers Akerman. Speaking of ratbags, Ms Mirabella will be on Q & A  on Monday, which is surprising after her heartless last appearance ― when the young panelist from GetUp, Simon Sheikh, collapsed and she distanced herself from being of any assistance. He should count himself lucky she didn’t give him the kiss of life.

Speaking of Mirabella, what in the name of God is happening over the Colin Howard million dollar court case, in which she is playing  a leading role?

Back to Slipper and the Liberals.

He was endorsed on nine separate occasions to contest his seat of Fisher for them and now, because of some sleazy and really dreadful allegations surrounding the former Speaker and a staffer, he is cast adrift by his former political mates.

The mock outrage being played by the Opposition at the moment is just that; after all, Abbott told the Independents he’d consider selling his arse to get their votes to put him in The Lodge.

Abbott should take a Bex, have a good lie down and fade into the background. He should allow his Party to reinstate Malcolm Turnbull, whose dignity and decency might restore his once great Party to relevance.

In closing, let me illustrate how mock outrage was dealt with in the days of Bob Menzies.

The late and great Fairfax political writer, Ian Fitchett – a man  of Menzian proportions  and a forerunner of Laurie Oakes – managed to get hold of one of the Menzies Budget papers and Fairfax published them on the morning before the Budget was delivered.

Fitchett took up his spot in the place where he habitually held court, beside the glass cabinet containing a copy of  the Constitution in King's Hall of the old Parliament House ― presumably laying in wait for the outraged Prime Minister to appear.

He didn’t wait too long before Menzies faced him.

“I’m going to make you eat crow Fitchett,” he bellowed at the bemused scribe, who as quick as a whip replied:

“I don’t mind eating your crow, Prime Minister, so long as its garnished by the sauce of your own embarrassment!”

One could say they did things differently in those days.