Mr Colgate: The other side of Mike Baird

Mike Baird may look like the candidate from Central Casting, but behind the nice hair and the big white smile lies a darker side, writes Peter Wicks from Wixxyleaks.

There is little doubt that Mike Baird is the Colgate Palmolive political candidate; his big white smile and nice guy approach has certainly done him no end of favours.

However, if one looks past the smile and smooth persona and looks at the actions and policies of the government he represents, the snappy savvy image soon looks like little more than a deceptive mask.

No matter what you may think of Magic Mike, perhaps his biggest trick has been to be viewed as somehow above all of the pain and incompetence brought on by the Government he has been a central part of ever since Barry O’Farrell got his bottle of Grange after winning office for the Coalition in 2011.

So I thought it may be a worthwhile exercise to look back at Mike Baird and NSW and the Coalition.

For starters, Mike Baird's Government is currently in tatters after the Independent Commission Against Corruption went through it like a dose of Epsom Salts washed down with Mylanta and prune juice. With twelve Coalition MPs forced to resign from their positions or move to the cross-bench, including a sitting premier, the Government Baird leads has proven itself to be one of the most corrupt in the country’s history.

Unfortunately for the Labor Party, the wounds left by Obeid, Tripodi and MacDonald have not healed enough for them to hold them to account to the extent they should be.

But Magic Mike is above all that corruption, isn’t he?

Not at all, given these corrupt MP’s were his allies, MP’s he socialised with, did business with, and one of whom was appointed by him to the position of treasurer. In fact, one of those  dragged in before ICAC to answer questions about illegal donations being laundered through the Liberal Party National Office was none other than Mike Baird’s principal fundraiser John Caputo, who was also questioned about giving cheques to Baird’s disgraced colleague Chris Hartcher, despite the cheques being made out to the Liberal Party.

Along similar lines, it’s hard to forget when Magic Mike refused to answer questions in parliament over donations allegedly made to his personal election campaign by a company called Eureka Capital. Soon afterwards, Eureka Capital was granted a multi-million dollar lucrative Government contract and the company's head Roger Massey-Green was appointed chairman of Networks NSW by the government.

Below is an excerpt from the documentation regarding the donation: 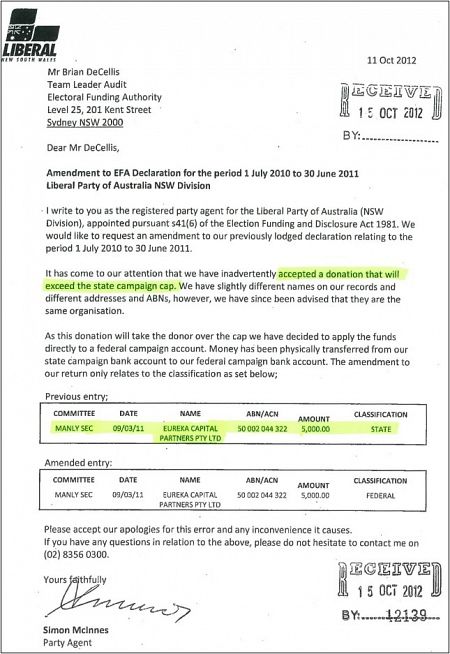 Networks NSW manages the state’s electricity distribution network, the very one that Mike Baird is seeking to sell off, privatise, lease out for 99 years or whatever you want to call the handing over the State's biggest asset to a private company.

Almost like magic, one of those who donated to Mike Baird's 2011 election campaign in his own electorate finds himself front and centre of a proposed sell off worth billions of dollars — a sell off put on the agenda by the Baird government.

It is also interesting that the man in charge of this fundraising for Mike Baird has already been before ICAC and testified to giving Liberal Party cheques to Chris Hartcher, who was found to be corrupt and involved in laundering illegal Party donations.

On another matter, Mike Baird has all the financial credibility of Freddie Mac crossed with Storm Finance.

Let’s not forget that as the states treasurer topped off delivering the first budget deficit for the state after years of Labor surpluses (even through the GFC) by losing a billion dollars.

Luckily for the good people of NSW there was an Auditor General who didn’t need an abacus to count and he discovered the billion dollars of State funds.

The then Auditor General Peter Achterstraat described the States finances under Baird's control as “rough and ready” and went on to say:

"The NSW government is a billion dollar business, it is not a school tuckshop."

One of the first things Baird’s Government did when they came into power was to dismantle the State's workers compensation scheme. This would leave thousands of injured workers suffering and out-of-pocket. This disgraceful act was the trigger for the largest political protests the country had seen in over a decade. Eventually, the Government caved in and left the compo schemes of the emergency services as they were, but only after being booed and heckled out of Parliament by uniformed police.

However the rest of us have to live with the changes designed to save a fortune for the insurance companies whose lobbyists made up the Liberal Party state executive at the time, while the public were hung out to dry.

The Government now headed by Baird also thought it wise to close down fire stations during one of the hottest summers on record. This led to pandemonium when the fires arrived with a vengeance, with fire crews forced to cover for other stations the Government had put offline. This daft idea was supposed to save a few quid on overtime, but ultimately failed, although insurance companies once again came up trumps with a new fire-levy that made the public pay extra on their insurance so insurance companies wouldn’t be burdened by the extra damage costs resulting from less emergency services personnel.

The "Baird Team" is also the Government responsible for creating news worldwide when they left disabled children stranded by the side of the road waiting for buses that would never come. To transport the disabled children to school, some were allegedly bundled into the back of vans and station wagons on plastic chairs — something I would suspect violates many traffic laws and would see us publicly shamed on TV and then heavily fined if we were to do it. Not Baird's Team, however.

Is this what Mike refers to as "Keeping NSW Working"?

Today we read in the papers about how Baird shed a tear when talking about the homeless and troubled youth at a Christian Lobby election forum. Awww

Well pardon me, isn’t this the same Premier who has slashed funding on both homeless and women’s shelters?

Mike Baird has forced many women and children living in abusive homes to make the choice between homelessness or risking theirs and their children’s safety by remaining with their abuser. Mike Baird has personally taken away their lifeline, so it is both appalling and sickening to see the desperate crocodile tear act on this issue in particular from a Premier who has sought to save a few quid at the expense of some desperate people seeking assistance.

There are too many bad decisions and blunders to fit in one piece, however the big issue facing Baird now is how much damage Tony Abbott will do him.

There are those who say that Baird and Abbott are two separate people with different ideas. That may be so, but it is worth remembering that Baird and Abbott come from the same political party, the same state, the same city, and evthe same electorate; they even shared the same questionable fundraising group, the Warringah Club, which now calls itself the Sydney Small Business Club.

They are peas from the same pod. They share the same twisted neo-liberalism we currently see being promoted by the Federal Coalition Government.

Mike Baird just does it while flashing all his pearly whites. Don’t be fooled, they still leave a nasty bite.

Peter Wicks is an ALP member and former NSW Labor candidate. Read more by him on Wixxyleaks and follow him on Twitter @madwixxy.

Help investigate Australia with Independent Australia by subscribing today for just $5 a month or $50 a year. pic.twitter.com/US1Gl6iqMA