In their first term, the NSW Coalition Government have had more than their fair share of mishaps — and Finance Minister Greg Pearce could be one of their biggest blunders, says Peter Wicks.

I'M SURE being a politician can be quite a stressful job.

I’m sure being a government minister may be even more stressful.

What I am even more sure about is that being a finance minister in a government that has delivered three budget deficits in a row would test anyone’s stress levels.

This comes after inheriting a surplus, and privatising everything they can whack a discount price sticker on.

Losing one billion dollars down the back of the couch, in your second budget, would hardly raise the confidence levels of your fellow government MPs — or so I would guess.

When the public elect MPs, they assume they can handle a bit of stress.

They assume the leader of a government will pick only the highest quality MPs for their frontbench.

What an epic failure, then, on every level, NSW Finance Minister Greg Pearce has been.

He is back from stress leave today. However, given he dashed out of a press conference today, refusing to answer questions – well – he may be back on leave before we know it.

Pearce suffered from a rare kind of stress that makes you smell like alcohol. It makes you take in vast amounts of fluids, and inhibits your mobility to the point where two staffers are required to assist you from Parliament House and into a car. (However, it is to be noted that recent reports regarding the introduction of “drunk tanks” in NSW are said to be unrelated to Pearce’s return from stress leave.)

Before he was allowed to take a month of stress leave, he had a hell of a couple of weeks. This was all before the NSW Government's third budget deficit was announced.

He hit the headlines in June after seemingly hitting the top shelf of someone’s liquor cabinet.

On the morning of the 30th of May, Greg Pearce was granted a pair after having to leave Parliament during a debate on the absolutely reprehensible “Victims of Crime Bill” introduced by the Coalition. Pearce later admitted to having a “couple of drinks", though it’s safe to say they weren’t Tony Abbott-style shandies.

We don’t know what classifies as a "couple of drinks” in Pearce’s eyes. Two glasses of scotch — or maybe two bottles?

Keep in mind this incident occurred in the morning. This wasn’t a late night sitting. It was well and truly in the AM.

Maybe Pearce knew what was coming?

On the 6th of June this year Pearce was in the papers once again. This time it was for rorting travel expenses. Pearce had called in “sick”, then promptly taken a flight to Canberra and booked himself into accommodation at the expense of NSW taxpayers. The trip was apparently for a guided tour of a vacant paddock. The developer he was meeting had no idea he was coming. Hmmm?

On the 14th of June, it was reported that Pearce was giving out jobs to his mates.

Ray Whitten, an ex-vice president of Pearce’s Liberal Party branch and a member of the very small “Friends of Greg Pearce” group, was appointed to be deputy chair of the new Safety, Return to Work and Support board — an $80,000 job. Pearce also elected Mr Whitten to the Workcover Authority of NSW and Motor Accidents Authority boards in 2011.

Then there’s Gavin Bell, the CEO of Pearce's old law firm Freehills, who was appointed to the Return to Work Safely board. Pearce appointed his secretary's husband Kim Garling as the WorkCover Independent Review Officer last year — a $300,000 job.

Not to mention Geoffrey Levy, also from Freehills, being appointed to run the government's property utilisation task-force. Mr Levy chairs a company called Cromwell Property who won a tender to buy $405 million worth of property he recommended the government should sell. Big bucks, even by Eddie Obeid standards.

What has emerged recently is more shocking than all these events, if that is possible.

Pearce’s Deputy Chief of Staff Natalie Ward has been forced to quit her job.

The problem with Ward is her husband, David Begg, is a lobbyist with a firm called PremierState.

The following is on their website under the title “Our People”:

'PremierState was founded by former NSW Cabinet Minister, Michael Photios and David Begg, Managing Director of David Begg & Associates and a former member of the Liberal Party State Executive. Michael and David are joined by a small team of talented professionals who bring a breadth of knowledge and experience across a range of industries.'

PremierState is the lobby firm for insurance giants Suncorp and Allianz.

It has been revealed that last year Ward and Begg were guests of Suncorp at the Melbourne Cup. This occurred while Ward’s boss, Greg Pearce, was looking at changes to Compulsory Third Party Insurance.

The reforms to green slip insurance, put forward by Mr Pearce, would save insurance companies millions of dollars. Coincidence I’m sure.

The proposals were designed to limit the medical expenses insurance to which companies are exposed. This means despite an increase in the price of your green slip, your level of coverage would plummet.

As a result of this controversy, the proposed changes have not passed through parliament. The project has been taken from Pearce and given to Andrew Constance.

There was recently a pathetic News Limited article, complete with a posed picture of Ward and Begg, complaining about the roads and politicians.

The Daily Telegraph painted them as ordinary citizens who are angry at politicians for the state of the roads. Nowhere in the article did it say Ward was a senior staffer of the finance minister, or that Begg is a political lobbyist who has spent time on the Liberal State Executive.

This whole episode makes me wonder about the other changes implemented while Pearce has been finance minister.

Keep in mind, this is while Natalie Ward has been a key member of his office, giving PremierState unparalleled access to the finance minister’s office.


Many of you will know about the Fire Levy being added to the bills of those who pay home insurance. This $300 levy is another windfall for the insurance companies. It covers the cost of the extra payouts insurance companies will have to honour due to the O’Farrell Government closing fire stations across the state.

The public will pay more for less service, less safety, and a lot more damage. The NSW Government save a few quid and the insurance companies get to make out like bandits.

Many people are desperate. They are unable to support themselves and their family and unable to pay their mortgages. They have been robbed of the quality of life they deserve. Once again, the insurance companies laugh all the way to the bank.

Starting to detect a pattern here?

I also note that on PremierState’s website they proudly state that one of their clients is:

'The industry leader in workers compensation.' 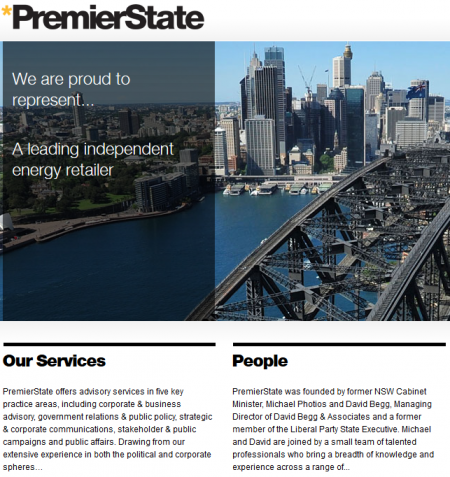 (Screenshot of the front page of the PremierState website.)

The changes to workers compensation pushed through NSW Parliament by the Coalition have been extremely controversial.

They've been slammed by unions and have led to the largest public protests in NSW this century. I even witnessed Coalition MPs being booed out of Parliament by angry police. O’Farrell later exempted police from the changes.

The fire levy and the workers compensation changes should be scrapped – or at least put on hold – while this matter is before ICAC. ICAC must launch an inquiry into this affair immediately. If Barry O’Farrell is confident there is no corruption involved he should welcome such a move.

The O’Farrell Government is in its first term, but already they are embroiled in a scandal that needs ICAC to investigate.

The Australian Securities and Investment Commission (ASIC) also need to look into the share trading on some of the key insurance companies since the Coalition came to power — particularly Suncorp and Allianz. It would be interesting to see if there are any timely purchases by members of the Coalition or their family members.

The same would go for Liberal staffers and employees of PremierState.

There is no wonder Greg Pearce is in need of stress leave.

It’s enough to drive a man to drink.

(Peter Wicks is an ALP member and a former NSW State Labor candidate.)