Barry O'Farrell was rolled out of the NSW premiership today, yet according to his colleagues he was more honest than Gandhi and his Government as pure as driven snow. Peter Wicks from Wixxyleaks corrects the record.

Today was a day that will linger in the memories of NSW voters long after the election next March.

Another day that might suddenly come back to mind is the 28 March 2011.

That was the day in 2011 that the day the voters of NSW bought a lie — and what a whopper it was.

Barry O’Farrell had run a campaign based around allegations of Labor Party corruption and scandal.

In his own words, Barry promised voters a government that was “scandal free”.

What a lie that turned out to be.

In the short time O’Farrell has been Premier there has been almost more scandals and scandal prone ministers than you can count.

Some of these include:

There's Attorney General Greg Smith who insults the victims of paedophiles and supports priests charged with sexually assaulting multiple young children, then puts forward legislation, now passed, so that most of the victims of these paedophile priests will never be compensated.

And we shouldn't forget Community Services Minister Pru Goward, who has overseen what many have described as a public housing crisis and has brought about such chaos in the Department Of Community Services that child welfare is at arguably its lowest point ever and there now talk that Federal intervention will be required.

On top of that, we have seen three NSW Liberal Party MP’s forced to stand down after ICAC hearings and raids — one of those being Chris Hartcher, a front bench Minister.

It is not often that we see a premier forced out of office due to ICAC findings; the last time it happened was back in 1992, when another Liberal Party Premier, Nick Greiner, fell on his sword.

The corruption in NSW that has to this point centred around Eddie Obeid has now spread like a rumour at a girl's school.

The allegations of corruption in NSW have been known as the NSW Labor disease, but now that it is clearly a plague on both houses maybe that will stop — though given News Ltd's obvious agenda, I doubt it.

A few weeks ago, I wrote an article on the differences between the corruption allegations against Labor and Liberal MP’s that went into how the trail of alleged corruption within the Liberal Party led to the offices of two Prime Ministers. It seems that we can now add the Office of the NSW Premier to that as well.

So let's have a look at what was the final straw for Barry O’Farrell.

The talk has been all about the $3,000 bottle of wine that slipped his mind, but it is more than just that.

The man who sent the bottle of 1959 Grange to O’Farrell is a man by the name of Nick Di Girolamo.

Mr Di Girolamo has seen himself in the news quite a bit lately none of it I’m sure would have been pleasing for him.

Di Girolamo is a Liberal powerbroker and major party donor and was also a Director of the notorious Australia Water Holdings (AWH).

AWH is a firm that is tied to Eddie Obeid through family ownership and ICAC has heard that Obeid himself lobbied strongly for the company in parliament, although he was shut down by the Premier at the time Nathan Rees.

Di Girolamo is a man who O’Farrell claimed to have never met and, when it turned out he had, then claimed it was merely once and he hadn’t recalled. 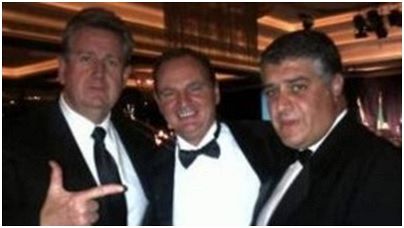 "Who's that guy? I've only met him ten times this year."

It then emerged that O’Farrell had, in fact, met with Di Girolamo at ten functions when photos emerged, leading to claims O'Farrell had misled Parliament twice in a week.

So much for Tony Abbott's man of "honour and integrity", which a series of NSW Liberal figures have emerged today to declare was the most honest politician since Gandhi and one who was done in – to quote Abbott again – by an "innocent and inadvertent" mistake. 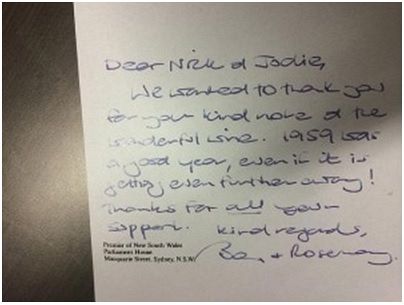 Now we have the bottle of wine that Barry forgot, the handwritten note saying thanks on the Premier's personal notepad (pictured right), he can’t remember writing, the delivery to his front door that escaped his attention and, of course, the phone call made to Di Girolamo that was made from Barry’s phone the same week the wine was delivered that he somehow also can’t quite recall.

My opinion on the Barry O’Farrell’s saga may surprise some. I genuinely feel a bit sorry for the bloke.

The way I see it, O’Farrell was a premier holding onto power by his fingernails. Barry was not a leader with strong factional ties and he was leading a party with a bitter factional war raging from within.

Barry, I feel, was placed in the unenviable position of not being able to afford to make enemies in either faction in case they withdrew support for his leadership. In order to do this, I believe, Barry has been trying to turn a blind eye to much of the corruption within the Liberal Party but has been unable to keep it completely at arm's length and some of the stench has reached him.

There are those, including Tony Abbott, who are saying O’Farrell is doing the honorable thing in resigning, I couldn’t disagree more.

O’Farrell thought he could stretch, bend and distort the truth and it came back and bit him.

If O’Farrell had done the honorable thing, he would have gone the route that Nathan Rees took and sacked those he thought corrupt and publicly named them and gone out with dignity.

Instead, O’Farrell supported those alleged to be corrupt and was caught out trying to deceive the public. For this he resigns in shame.

I also question how much of Barry’s resignation is to do with the wine and how much may be related to other revelations yet to come from ICAC.

What we do know is that the Coalition has now effectively delivered us an empty chair for a Premier due to their alleged corruption and dishonesty.

What is probably even worse than that empty chair is the idea of Mike Baird becoming Premier — which seems highly likely.

For those interstaters who don’t know Baird, he is the NSW Treasurer that despite inheriting a surplus and landing his job after the Global Financial Crisis was over, has delivered nothing but deficits in the hob. He is also infamous as being the Treasurer who lost a $1 billion.

Just as well there’s an election next March.

Peter Wicks is an ALP member and a former NSW State Labor candidate. You can follow him on Twitter @madwixxy.

Wow I hope they don't find Barry's notes to me. #auspol #nswpol pic.twitter.com/FcCHAWH8Dt