'Menacing' Tony Abbott glaringly out of his depth

'Menacing' Tony Abbott is to the Liberal Party what Mark Latham was to the ALP, says Barry Everingham. The Liberals need a more stable leader.

There’s no doubt that Tony Abbott is to the Liberal Party what Mark Latham was to the ALP—both are thugs, neither should have ever attained the leadership of their respective parties and Australia should be eternally grateful they were denied the opportunity of moving into The Lodge.

Of course, the fact that both of them even reached the dizzy political heights they did says more about those who voted them than about the guys themselves.

Latham, of course, has been dispatched to trash heap of history where, along with John Howard, he rightly belongs. But at least Latham didn’t sign the death warrants of thousands of innocent Iraqi citizens.

Tony Abbott is beneath contempt; it’s difficult to find a box low enough for him.

The Liberals showed their colours by casting down a leader of the calibre of Malcolm Turnbull in favour of Abbott.

Abbott’s latest meltdown – his Mark Latham "handshake" moment – is a disgrace. Abbott spent almost two minutes (80 seconds of which Channel 7 say they didn't show in their news reports) nodding his head and glaring "menacingly" at a Channel 7 news reporter who had the nerve to ask him why he'd said "shit happens" when discussing the death of an Australian serviceman with American military personnel in Afhanistan.

The right wing troglodytes in the Murdoch media, of course, are heaping their vitriol on the Channel 7 reporter...for doing his job! Why the ABC wastes taxpayer money keeping Media Watch going escapes me—Bolt and Ackerman traduce any news man and woman who don’t agree with their extreme conservative un-Australian views.

Of course, this is not the first time Abbott has stood over journalists and others when he didn't like their questions. He also nattempted to intimidate the ABC Four Corners reporter, Sophie Ferguson, just last year when she asked him about the infamous $8 billion black-hole in the Coalition's election costings.

My colleague, David Donovan, wrote about it in this journal:


The reporter, Sophie Ferguson, immediately asked Abbott the question that any credible journalist would, or should, ask under these circumstances: was this black-hole the reason the Coalition did not want to give the Independents their costings?

“That is a very offensive question” he snarled, twice, before looming up to the petite Ferguson, scowling. It was a scene reminiscent of the Mark Latham’s handshake with John Howard at the 2004 Federal election that had so cruelled Latham’s chances. It showed an Abbott that, when under pressure – when the fake charm is wiped away – is something of a bully...

Let's not forget Abbott is also the one who was caught yelling across the floor in Federal Parliament for Julia Gillard to remove her "shit-eating grin". Then there was the time he was caught on tape swearing at Nicola Roxon after a Health Debate in 2007—a debate to which Abbott was half-an-hour late!

How this volatile, intemperate and sometimes even openly aggressive man is able to retain the Liberal Party Leadership is a sad inditement of the state of the Federal Liberal Party. As former Liberal leader John Hewson said about them recently, "dare I say it but on that frontbench there is more ambition than talent".

And talking of un-Australian behaviour, just where is Abbott coming from using his numbers to stall the passing of the Bill which would have brought help to the thousands of victims of the cyclone trashing of Queensland? Talk about cheap political behaviour—this bloke is way out there on his own.

Yesterday, as though the Liberals hadn’t done enough damage, they even have the audacity to put our esteemed Governor General in their line of fire.

The Liberals are bagging her for taking too many aides when she travels representing all Australians.

Now, her Excellency Ms Quentin Bryce is one of the finest incumbents of Yarralumla—she can’t respond to the outrageous slurs heaped on her under Parliamentary privilege today. I don’t know exactly how Government House works, but I would assume Her Excellency’s advisors would be responsible for making her tours here and overseas successful and if that means using the staff at her disposal, then so be it. How dare they besmirch this office for cheap political point-scoring. 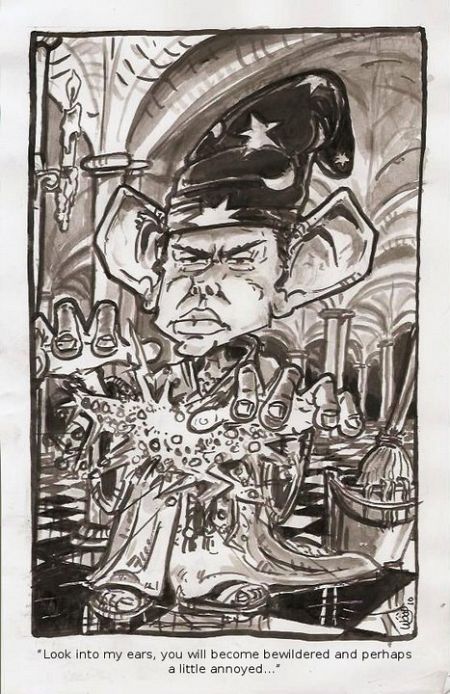 
All in days work for 'Menacing' Tony. Shit does happen, so it seems!