A global trust survey released this week revealed the unsurprising result that our trust in politicians, business leaders, NGOs and the media is still falling. As Doc Martin reports, the one bright spot is that online journals like Independent Australia are gaining readers' trust whilst the MSM continues to fail.

THE EDELMAN TRUST BAROMETER survey indicates we are living in a time of mistrust and a rising tide of populism. Our faith in the mainstream and elites is falling, but there is no credible alternative yet ready to fill the vacuum.

In fact, the headline summary in the survey is that the “system” is “failing”. In many countries, Australia included, less than half of respondents to the Edelman Trust Barometer survey reported that they had any faith in mainstream institutions.

According to survey results:

‘... only 15 per cent of the general population believe the present system is working, while 53 per cent do not and 32 per cent are uncertain.'

Australian's trust in government is falling - one of the bigger drops according to this Edelman report. https://t.co/EtrvLwjCsG pic.twitter.com/GTGfH9vvOl

While the results are interesting and alarming, as with all surveys, we have to caution about reading too much into them. Survey methodology, measurement, sample-size, and the wording of questions are all areas where bias and unreliability can creep in.

The owners of the survey and their motivations for releasing the results must also be addressed when assessing the reliability of results. My reading is that the survey is flawed, so the results should be read cautiously.

The Edelman Trust Barometer is owned and promoted by Edelman, one of the world’s largest PR companies. Edelman and CEO Richard Edelman is certainly part of the global business elite himself. 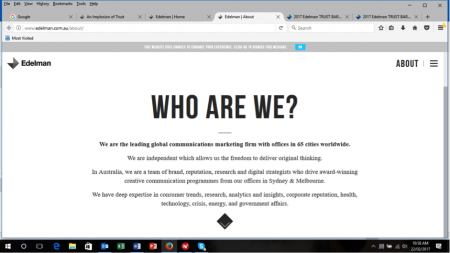 The pro-business bias in the survey is clearly in the interests of Edelman — the subtle message is obvious too: Edelman can help you regain trust, if you follow our communication strategies.

This is clear in the commentary, ‘An implosion of trust’, written by (or for) Richard Edelman.

'The onus is now on business, the one institution that retains

some trust with those skeptical about the system,

Free markets can succeed for all if business

works with the people, not just sells to them.'

~ Richard Edelman is president and CEO.

This year's Edelman #TrustBarometer reveals a profound crisis in trust across all four institutions that is causing a systemic meltdown. pic.twitter.com/MImds8ndqM

My concern with the sample in this exercise is that it is pretty small. There are two groups — the “informed public” (6,200 subjects worldwide) and the “mass population” (32,000 subjects world-wide). It’s hard to generalise to over six billion people from these numbers.

The purpose of this split is to allow for a comparison between the “informed” and the “mass”, which is an elitist assumption to begin with. I also have a problem with some of the leading questions, that frame the survey in a particular way. [All illustrations are from slides provided by Edelman] 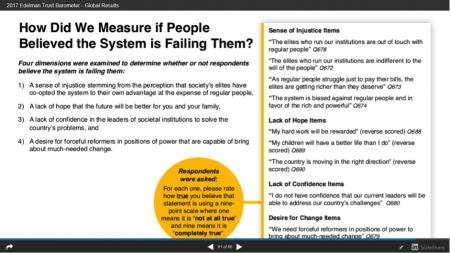 You can see from the sample questions listed on the right of this slide just how leading (misleading) the survey is. The questions are predicated on an ideological belief in the free enterprise, market system (as per Richard Edelman’s own self-interest referenced above) and they push the respondent in a particular direction.

So, with these caveats in mind, it is worth taking a look at what the Trust Barometer says about the world in general and the media in particular.

The system is broken 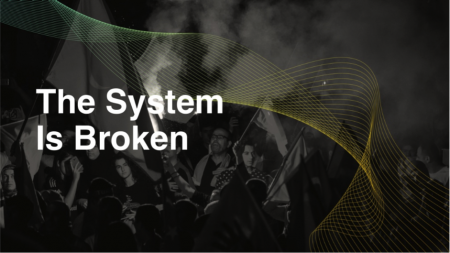 Over half of all respondents believe the “system” is “broken”, more than 30 per cent are “uncertain” that it is working how it should and only 15 per cent of respondents reported that the system is working — at least for them. That adds up to a lot of worried people.

Overwhelmingly, Australians think the system is broken; with 59 per cent agreeing with this proposition and 30 per cent saying they are “uncertain” about it. Perhaps we can put this down to the lacklustre disaster that is our Federal Government.

This is quite shocking in many ways and it means that Richard Edelman’s dream of making capitalism great again will take a lot of work to realise. That’s probably a good thing.

The findings – or perhaps, more accurately, the interpretation – that I find most disturbing in this survey revolve around the way it positions the rise in “populist” political movements (mainly on the right) as a new driver of history and change. 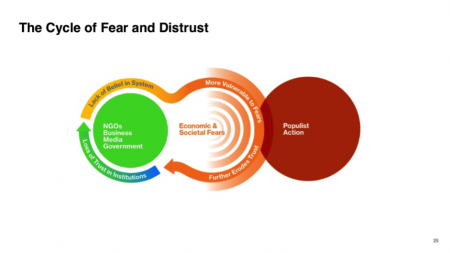 But it is also here that the choice of questions skews that data and, therefore, how it is interpreted. 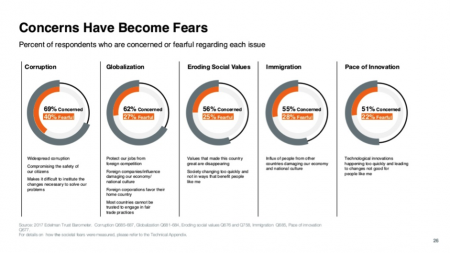 The wording of the questions – and even the selection of topics – will push respondents in particular ways that, if they were given different options, may well have presented different findings. As it stands, the statements around “Globalization”, “Eroding Values” and “Immigration” are quite loaded. Presenting these options as “Fears”, positions the survey and respondents in a highly ideological and pre-structured way.

Thus, it is perhaps not surprising to find that Trump voters – those who have been actively encouraged to be fearful by Trump’s campaign rhetoric – display the most fear. We might also note at this point that education (the separation of “informed public” from the “mass”) may also play a role here. (Note: the survey was conducted around the time of the U.S. election, when Trump’s fear rhetoric was at its highest point, but this “flash poll” was just after the election.) 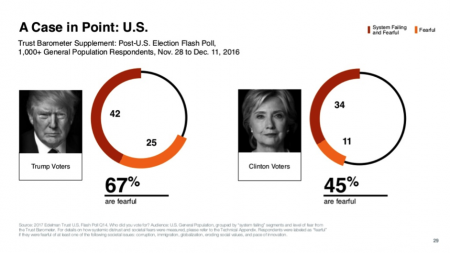 A similar result was noted in the UK in relation to “Brexit”, those who support the “leave” campaign express more fear than the so-called “remainers”. 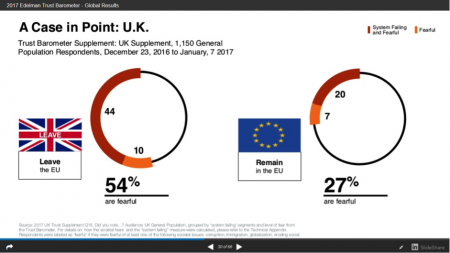 One thing that is confirmed by the survey results – again, discounting for skewed questions – is that isolationism, nationalism and xenophobic fear are on the rise, both fuelling and being fuelled by the rise of the nationalist and racist right-wing parties and groups. 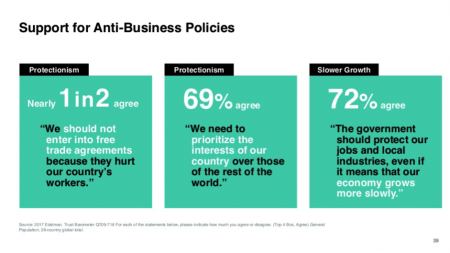 It is illuminating that the designers of the survey cast this as “anti-business” sentiment. It shows that the ruling class is worried by this protectionist, isolationist trend against their global interests.

It’s worth now looking at the media-related questions and results in this survey, given that the media plays a significant role in popularising conservative fearmongering about immigration and globalisation agendas.

Trust in the media is still dropping 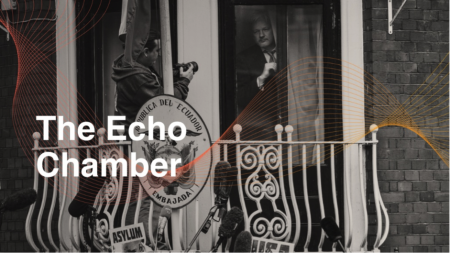 When it comes to a discussion of the media, the Trust Barometer 2017 result shows a further five point drop in public trust since the 2016 survey. In general, the survey shows only 43 per cent of people trust the media to tell the truth.

The survey shows that in Australia trust in the media has fallen 10 per cent in the past year. It is now at a disastrous 32 per cent. The Edelman analysis of this is worth commenting on.

We are all familiar with the concept of the media echo-chamber and this graphic from the Edelman slide show demonstrates it effectively. 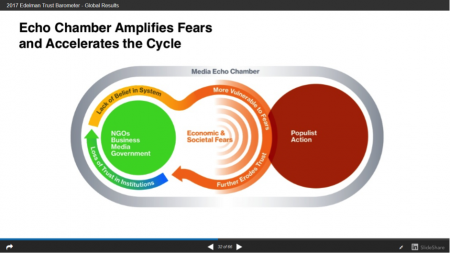 The Echo Chamber is filled with horrors

Regular IA readers don’t need to be told how this works; we are all aware of the many ways in which journalists fall into the echo chamber trap and amplify the fear cycle.

Right wing forces, including Turnbull Government ministers, rely on this process to amplify their message and drown-out any alternative. It is extremely disappointing that the ABC is now being pushed in the same direction. I’ve commented before on this, and IA readers have also registered their disgust at the high volume of conservatives linked to NewsCorpse and the IPA that infest every nook and cranny of the once-reliable public broadcaster. 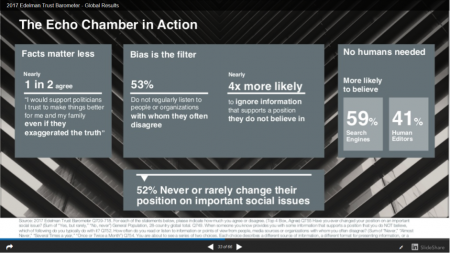 This slide shows how the echo chamber works, but note (again) the inherent bias in the questions: ‘I would support politicians I trust to make things better for me and my family even if they exaggerated the truth’ — sounds awfully like Trump.

It’s not surprising that the survey results show that the decline in trust is sharpest for the traditional, mainstream media. 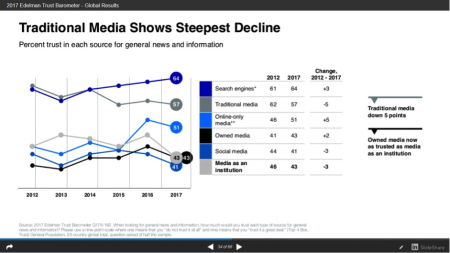 But, what is more interesting about this chart is that search engines, online media and “owned” media (corporate and brand sites) have all grown slightly, while “traditional” and “social” media are down.

I don’t know about you, but I find it quite staggering that “Dr Google” is the most trusted source for general news. After all, search engines don’t write the news, they just serve it up according to mysterious algorithms that are gameable.

Our trust in official sources is also dropping (no surprise, really), but who are the “reformers” and the “preservers of the status quo” in this media landscape? 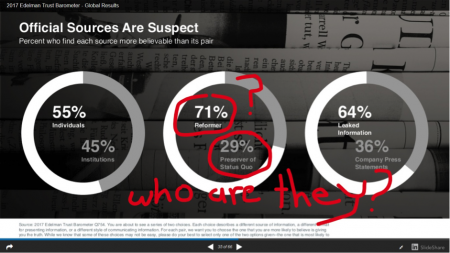 Trump could be seen as a reformer. Perhaps we need to interpret this as “reformer” equal to “outsider”. But this next slide shows that we’re just as likely to trust a random person as someone who might be “qualified” to have an opinion. 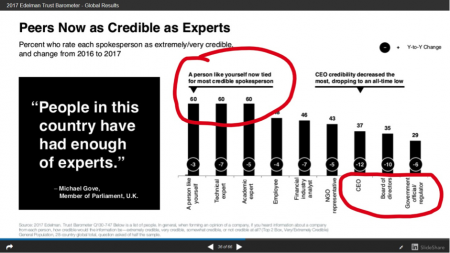 When you look at these numbers, it is not hard to see where “fake news”, “post-truth” and “alternative facts” fit into the picture.

What this survey doesn’t tell us

While the results of this global survey are interesting, they are skewed in a pro-business direction. The last third of the Edelman slide show is all about how business leaders need to change – according to the Edelman model, of course – to drag us out of the mess.

We can discount that; it is the “sell” that inevitably comes with such commercially-driven surveys (we’ve shown you the problem, here’s our solution, yours for the low, low price of…)

I’m interested in the media and journalism and what this survey doesn’t tell us is why this problem exists with the mainstream media and what we should be doing about it.

Regular IA readers will know that I bang on about this quite a lot. It is my professional interest to do so and it’s why Mr Donovan lets me have this weekly column.

Recently, I’ve looked at the very real problems of covering Donald Trump when he blatantly lies every time he speaks or tweets more than one or two syllables. I’ve dissected “fake news” and the “post-truth” media.

I’ve bemoaned (at length) the gutting of the ABC under Michelle Guthrie, which is a national disaster and about which I have received some excellent commentary from generous IA readers. I’ve examined the false prophets of free speech and I’ve written about the political and philosophical problems facing journalism today.

There is no easy solution. But the fact that online media outlets like IA are actually gaining trust while the mainstream is going out backwards does offer some hope.

Part of the answer is, obviously, keeping sites like IA alive financially, as well as emotionally.

If you like IA and are not yet a subscriber, now is the time to make a difference.

Why fake news is like a shit sandwich
Media Sauce: Post-truth news from #Pizzagate to the Pontiff's poo missive https://t.co/1FZT9JcwFK