The Abbott Government has repeatedly refused to comment on specific disclosures on Pine Gap leaked by Edward Snowden, insisting Australia would not use intelligence "to the detriment of other countries". Dr Hannah Middleton and Denis Doherty call for a public enquiry into Pine Gap's function.

THE UNITED STATES Pine Gap satellite tracking station, 19km south-west of Alice Springs, was built in 1966 and came on line soon after.

“a supranational intelligence organisation that doesn’t answer to the known laws of its own countries."

Professor Desmond Ball said there has been "a fundamental transformation" in the role of the Pine Gap facility from "a highly specialised mission" to a "multi-agency, multi-purpose mega-intelligence centre”

"Pine Gap is engaged in "collect-it-all" surveillance, military as well as civilian, linked directly to military operations, including drone strikes.”

Mass surveillance of satellite communications has grown. There are now 232 antennas available at the sites identified, almost double the capacity before 2001.

According to the report

‘We conclude that development work at the observed sites since 2000 has more than doubled coverage, and that adding Torus has more than trebled potential coverage of global commercial satellites.’

Torus is a new kind of satellite espionage, capable of soaking up calls and messages and data from 35 satellites at once. A Torus dish can monitor 70 degrees of the sky, without moving. It collects all the different facets of modern communications, from Facebook to fax.

Between 2007 and 2013, western spy agencies have built six new Torus antennas in the UK, Cyprus, Oman, Australia and New Zealand.

The Torus interception network complements well-established satellite interception facilities including those operated by the Australian Signals Directorate at Kojarena, near Geraldton in Western Australia, and Shoal Bay, near Darwin.

Pine Gap's secret role in satellite communications interception probably began in the early 2000s and has been supported by the deployment of U.S. Air Force intelligence detachments to the base. A Torus multi-beam antenna was installed at Pine Gap in 2008.

Pine Gap is managed by the U.S. National Reconnaissance Office and is the CIA’s most important technical intelligence collection station in the world.

The base also intercepts a very wide range of radio and mobile telephone communications to provide tactical intelligence support for U.S. military operations across the Eastern Hemisphere, including drone strikes in Afghanistan, Iraq, Yemen and elsewhere.

There have been no official statements about Pine Gap’s new role.

In 2013, then Defence Minister Stephen Smith said the Australian government approves the presence of a capability or function in Australia

" but this concurrence does not mean that Australia approves every activity or tasking undertaken".

The Australian government has repeatedly refused to comment on specific disclosures from documents leaked by Edward Snowden. Last year, Prime Minister Tony Abbott insisted that Australia would not use intelligence "to the detriment of other countries".

Pine Gap’s new functions – from its role with drones to the assault on privacy contained within the “collect-it-all” strategy – must be exposed.

The peace movement has been calling for Pine Gap to be closed down for many years.

Hidden by government secrecy and its isolated location, most Australians know little of its spying and war fighting functions. Many do not even know it exists.

In response there has been a long campaign for a public enquiry into Pine Gap’s functions.

Now the need for an informed, transparent public re-assessment of Pine Gap’s roles is more important and more urgent than ever. 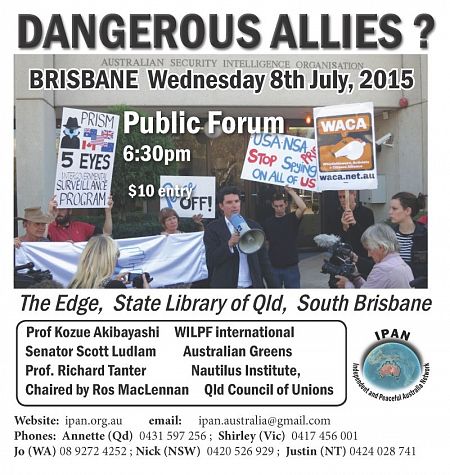 You can find more information on www.anti-bases.org.

For the news not covered by mainsteam media, subscribe to IA for just $5.

19 June 2015, 5:30pm The Abbott Government has repeatedly refused to comment on specific disclosures on ...
Join the conversation
comments powered by Disqus
News updates