With Ireland voting for marriage equality over the weekend, the pressure is once again on 'Captain Catholic' over an issue that clearly makes him feel 'threatened'. Eva Cripps says all that needs to be changed is five words. 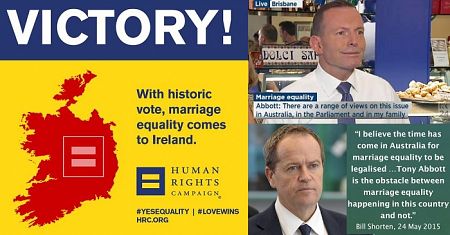 Traditionally conservative Ireland moves with the times, while Australia languishes behind under the reactionary Abbott Government.

CATHOLICS are not known for social progression. Abortion is evil. Divorce is a sin. Being gay is unnatural and against God’s will. At least that is what the celibate, robed patriarchy in charge of church ideology will tell you.

But times move on. And now Ireland has joined a long list of countries and states to allow all couples in loving relationships to marry. Ireland, a historically conservative Catholic nation, has shown Australia up by becoming the first country in the world to approve same-sex marriage by popular vote.

Marriage, which only in recent times became the domain of righteous, god-fearing people, has a lengthy and diverse history. Traditional advocates fiercely contend that marriage is about children – and biological children at that, according to Lyle Shelton, managing director of the Australian Christian Lobby.

However, the one man, one woman, voluntarily marrying is a comparatively recent phenomenon.

On the whole, it is people of "faith" who are the most vocal opponents of same-sex marriage. However, the whole Christian argument about God blessing marriage and declaring it sacred falls down as soon as you consult the bible, where even polygamy is endorsed. Other cultures and religions also have varying interpretations on what marriage means and how it should be practiced, including position on same-sex unions.

Despite the official stances of religious institutions, the greatest endorsement for the Christian approval of marriage equality comes from the majority "Yes" vote in Ireland, where 84.2% of the population identified as Catholic in the 2011 census.

And this brings us back to Australia.

Despite a majority of Australians supporting marriage equality, the Australian nation is now lagging behind over 22 other countries and a host of American states.

Following the resounding "Yes" vote in the Ireland referendum, Prime Minister Tony Abbott has staunchly defended his opposition to marriage equality. He reaffirmed his position by declaring that “questions of marriage are the preserve of the Commonwealth Parliament” and

“I don't think anyone is suggesting the Constitution needs to be changed in this respect."

On both counts, Tony Abbott is correct.

It is entirely the responsibility of the Commonwealth Parliament to enact laws for the people of Australia. It is entirely within the ambit of the Commonwealth Parliament to legislate on marriage. And with between 64% – 68% of Australians supporting same-sex marriage, it is understandable that Abbott, opposed to marriage equality, would attempt to write off the idea of a popular vote.

However Abbott has misinterpreted the position of the Constitution. The Constitution of Australia does not need to be changed to allow marriage equality. The High Court, when overturning the Australian Capital Territory’s same-sex marriage laws in 2013, declared that

“‘Marriage’ in s 51(xxi) [of the Constitution] includes a marriage between persons of the same sex.”

Clearly, no popular vote is required.

All that is required for legalised marriage equality is for the Commonwealth Parliament to change five words in the legislation.

The Marriage Act 1961 (Cth) defines marriage as being

'... the union of a man and a woman to the exclusion of all others, voluntarily entered into for life.'

The Parliament simply needs to delete 'a man and a woman' and replace it with 'two persons'.

The long road to marriage equality http://t.co/Be3OZUDnYM It's 10 years since John Howard changed the marriage act to exclude gay couples

Until 2004, the legislation technically allowed for same-sex marriage, however it was generally accepted that marriage was between man and woman. Howard, also opposed to marriage equality, outlined in the Explanatory Memorandum that he wanted to protect what he called 'the institution of marriage'.

'... reflect the Commonwealth's view that the adoption of children by same sex couples is undesirable.'

Despite the Government changing in 2007, the new definition expressly excluding same-sex marriage remained, even with Rudd later voicing support for marriage equality. However the Government sought to remove the institutionalised assumption that same-sex couples would be terrible parents by changing the definition of ‘de-facto’ in the Family Law Act 1975 (Cth) to include same-sex, giving them identical parenting and other rights as opposite-sex couples.

Many Australian opponents of same-sex marriage cite the general parity at law as a reason to deny marriage equality. They claim that civil partnerships – available in the Australian Capital Territory, Queensland, Tasmania, Victoria and New South Wales – are a substitute for and equivalent to marriage.

The reality remains that civil partnerships are not a legal marriage and do not have the same social and cultural inferences as marriage.

It seems absurd, given that same-sex couples are afforded at law almost all the same rights for property, parenting, estate and superannuation as other couples that they may not marry. It is clear that the objection to same-sex marriage is social, cultural and largely religious, not legal.

And it is very clear that the Australian Government is out of step with the community.

There are no reasons, other than those influenced by religious ideology, for refusing same-sex couples the right to marry. 61% of Australian people identified as Christian in the 2011 census. It is obvious that, with a majority of Australians in favour of marriage equality, a large percentage of those people hold Christian beliefs.

The argument that marriage is about a man, woman and biological children ignores the reality and values of contemporary Australian society. These arguments against marriage equality demonise hetero couples who seek IVF treatment for much wanted children, couples who adopt, and step-parents who devote a decade or more to help raise another person’s child. It also ignores the couples who choose not to have children, or who cannot have children due to age or medical reasons. The argument that children need a male and female parent ignores the reality of single parent households, including those where one parent has died. It ignores the reality that even in traditional households, a full-time working parent often sees very little of their children.

The only thing holding back marriage equality in Australia is the five words inserted into the Marriage Act in 2004. Five words which can easily be changed by the Commonwealth Parliament.

Given the community support for the right for all loving and committed couples to marriage, those five words should be changed.

It is time Australia caught up with the rest of the developed world.

Over the weekend, Ireland votes yes to marriage equality. So when will this happen in Australia? Tonight on #TheFee… pic.twitter.com/VbGiZkWFSs