Marriage in the Judeo-Christian scripture — those kinky Hebrews

The Old Testament suggests the God of Israel does not follow what the Church currently regards as Biblical family values, says Alan Austin. 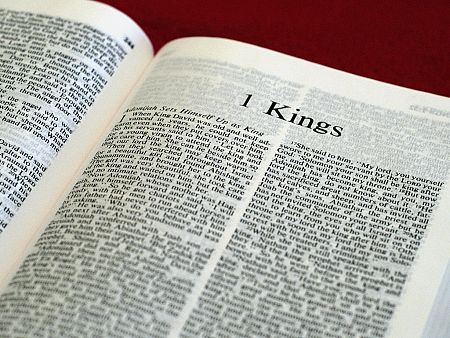 When you have a ménage a trois, they must not include a woman and her daughter. “That is wickedness.” Says the Lord. And when a man sells his daughter to another man, he must refund the money if the buyer finds the sex unsatisfactory.

Just two instructions in the ancient Hebrew Scriptures which suggest the God of Israel does not follow “Biblical family values”.

The Anglican Archbishop of Sydney urged his followers last week to “commend the Biblical way of life in our churches and to the community.” This was in anticipation of this week’s report on same-sex marriage to the Australian Parliament.

Dr Jensen’s definition of marriage specified “two persons of the opposite sex”. Roman Catholic and Orthodox leaders echoed this call.

The problem these venerable gentlemen have, however, is that their understanding of the “Biblical way of life” is just nowhere found in the Bible.

Abraham is one of the greatest heroes of the Judeo-Christian tradition. When he and wife Sarai found themselves childless, they brought their slave girl Hagar into the bedroom. The resulting son became a great patriarch.
Abraham later took a second wife, Keturah, and had several more kids. He also had children with an uncertain number of mistresses — or concubines.

Jacob’s sex life was more bizarre still. He purchased his first wife Leah from her father — then married her sister Rachel. Rachel’s servant girl Bilhah soon joined them “as a wife” for at least two children. A bit later, Leah’s servant girl Zilpah made it a happy fivesome.

Yes, a bit kinky perhaps. But there is no hint in the texts this was irregular. In fact, the opposite. Great rejoicing at these blessings from God.

These lucky guys were not alone. Lamech took two wives. Esau had three. Gideon had many wives. King Solomon had 700 wives and 300 concubines. Rehoboam took 18 wives, and 60 concubines. Abijah had 14 wives. Caleb had children with at least two partners. David had eight wives, an unknown number of concubines and a relationship with Jonathan. There are others we know of and many we don’t.

This is not to suggest ancient Israel was Amsterdam in the swinging sixties. The opposite, in fact. Polygamy was ordained by God to fulfil the commandment to be fruitful and multiply. Especially after famine or war had depleted male populations. Clear guidelines were firmly in place.

A man may assign one of his slave girls to a male slave for them to have children. When the male slave is redeemed — he is free to go. But his wife and children remain the property of the owner.

A virgin who is raped must marry the rapist with no possibility of divorce. But the rapist must pay the father 50 shekels for his property loss. A bride who is discovered after the wedding not to be a virgin must be killed.

The argument that God disapproved of multiple partners but tolerated and regulated it – as with divorce – is unfounded. There is no hint anywhere that polygamous, same-sex or extramarital unions are intrinsically wrong. Some may be — but not all. Yes, Solomon was rebuked for taking too many foreign wives. But nationality was the problem there, not multiplicity. Although 700 does look a bit greedy…

God’s prophet told King David he could have had even more wives had he wanted. This is just not possible if polygamy was in any way sinful.

The New Testament, in contrast, teaches clearly against marriage, proclaiming celibacy as the preferred option for followers of Christ. “It is good for a man not to touch a woman,” Paul instructs. And later, “He who marries does right, but he who does not marry does better.”

Marriage is grudgingly permitted for the weak and then regulated. Slaves, wives and children are all subordinate to the husband. There is one commandment in the New Testament requiring one wife. That applies to bishops or elders only.

So where did the curious idea arise that Biblical marriage is one-man-one-woman? It appears to have originated from a poetic piece set in the Garden of Eden, a passage often read at weddings.

Genesis chapter 2 says: (24) “Therefore shall a man leave his father and his mother, and cleave unto his wife: and they shall be one flesh. (25) And they were both naked, the man and his wife, and were not ashamed.”

Clearly, say conservatives, this has the words “a man” and “his wife”. End of argument.
Increasingly, however, scholars say this does not deal definitively with questions of number, gender, race, or anything else regarding marital partners. Rather, it is snapshot of the first union between Adam and Eve, which affirms that partnerships should be permanent and that newlyweds should not live with his parents. That’s about all.

These are all singular terms, but clearly imply plural. Similarly, instructions to fathers to “not provoke your children” apply to fathers with only one child.

So restricting Genesis 2:24 to just one spouse fails. Besides, they ask, how can we apply verse 24 rigidly today, but not verse 25?

Scholars note also that Genesis 2:24 uses the Hebrew word ‘dabaq’ for being joined, or cleaving. What does this mean? We find the word also used for Solomon and his many wives and for the relationship between two women, Ruth and Naomi. So on the face of it, whatever ‘dabaq’ means, it can apply to polygamous and same-sex unions.

“Men owned households,” he wrote in his submission to the Australian Senate in April. “That included sexual access to wives and slaves, but never incestuous relations. Men decided with other men whom their daughters would marry and so ‘gave them away’, a tradition which still survives at least in ceremony in many wedding liturgies.”

Loader concludes that “there appears to be no sound reason to exclude same-sex couples” from marriage.

So, Christians are quite free to argue for a definition of marriage as “the voluntary union for life of one man and one woman”.

But they are not free to claim this is Biblical.