If you are like Ned Kelly you have nothing to fear from Queensland’s VLAD laws, writes Eva Cripps — but everyone else should be afraid.

SHOULD YOU BE AFRAID of the Queensland Government’s anti-association and VLAD laws?

According to Premier Campbell Newman, and the Attorney General Jarrod Bleijie, only criminal bikies have anything to fear. But contrary to these assertions, the raft of laws, which include lengthy mandatory sentences for minor crimes and a ban on associating with three or more other ‘participants’ in a bikie club in public, could see you, an ordinary Australian, whisked away to a solitary cell.

The Queensland Government promised, in its $800,000 campaign, that only criminal bikie scum would be targeted and good law-abiding people had nothing to worry about.

So why should you be afraid?

The broadly worded anti-association legislation classes a ‘participant’ as almost any person with almost any conceivable link whatsoever to a declared Outlaw Motorcycle Club. The link may be tenuous. It may be a figment of the arresting police officer’s imagination. It is totally out of your control. The VLAD legislation makes no mention of bikies at all.

You may have previously attended a perfectly legal tattoo or motorcycle show. Or perhaps ridden in a perfectly legal charity Poker Ride. Maybe you installed an air-conditioner in a perfectly legal clubhouse. You may be out on the town in a group of three friends or hanging out with your football team. Now, you could find yourself arrested and detained for having a beer with your mates, working in a clothes shop in a now defunct bikie clubhouse, or imprisoned for fifteen years for a minor biff in a bar.

You may even find yourself banned from working in your chosen field of employment.

Campbell Newman, incensed at the reality of his ill-conceived legislation, has labelled these truths as “lies, deceit and misinformation”. He has declared that he will spend yet another $500,000 of your money to tell you that only criminals will be targeted by his laws. Only criminals will languish behind bars, while they wait to prove to a magistrate why they should not be incarcerated before they have even been tried for the dangerous and criminal activity of having lunch with their boyfriend and a mate.

And this is why you should be afraid.

The police can now search you and your vehicle without warrant, and arrest you for doing your groceries at the same time as your brother and uncle. You'll no longer have a licence to unblock a toilet or build a retaining wall. All the police need is a ‘reasonable suspicion’ that you have any links whatsoever to one of these declared motorcycle clubs.

What may be ‘reasonable’ to you does not have to be so for the over-zealous police officer.

He is likely to be keen to please his masters, after being threatened with the sack if he does not fully embrace and endorse the new laws, which are supposed to clean up Queensland’s streets and make them a paradise for families.

In a reversal of normal legal rules, once the police officer has alleged this ‘link’, you will have to prove it is non-existent.

What has become clear from the fumbling and blustering orations of the authoritarian dictator Campbell Newman, is that ordinary people have a lot to fear.

But how can you ensure you are not mistaken for criminal scum and gaoled? Surely there must be some kind of profile the police are using to identify these people?

According to Butterworths Concise Australian Legal Dictionary, a ‘criminal’ is a person who has been convicted of an indictable crime or offence.

‘…a film or layer of foul or extraneous matter that forms on the surface of a liquid.’

It is fairly difficult to tell if a person, simply by looking at them, has a criminal record and has engaged in prior criminal activity. And so far, no dirt or froth covered liquid has fallen foul of the laws.

The easiest way to determine who may be targeted is to examine those already arrested in Queensland.

Firstly, if you are a woman, of medium build, with brown hair and pleasant features, and have a boyfriend with a beard, you may be targeted. It will be irrelevant that you are a librarian, mother of three, and have no criminal conviction whatsoever.

It will most certainly go against you if anyone in your family has a reptilian pet and your kitchen knives are prominently displayed when police search your home. Any ornamental or kinky items which could be vaguely described as weapons could also be used as evidence of your obvious criminal persuasions.

You may also come under fire if you are a young man, with soft facial features and blonde hair. Or a middle aged man, with short cropped hair, brown eyes and clean-shaven.

You should be particularly careful if you work as a pizza delivery boy, renderer, truck driver or currently studying IT. Men of all ages with children, adult or young, should also be cautious. If you are wearing shorts and t-shirt you may slip under the radar for a short while, but wearing anything leather will definitely see you targeted.

It goes without saying that if you have a beard and tattoos and ride a motorcycle you will also be hot on the list of targets. But you may also draw attention if you have muscly arms, regardless of if you are male or female. And if you look buff and tough and buy ice-cream for your kids, you will most certainly get attention from Newman’s finest law enforcers. 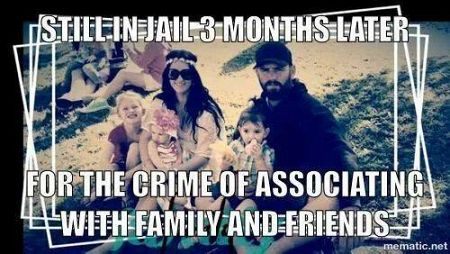 The clearest clarification was provided by Campbell Newman on 30 January 2014, when he said that the criminal bikies were

This provides for some much needed insight into who should be afraid of arbitrary police action and detainment.

Ned Kelly, the famed historical Australian outlaw, was a convicted horse thief and police killer. He was short of stature and sported a bushy beard. His frame was thin and wiry, as may be expected from someone notorious for ranging the bushes.

One may safely deduce that if you fit this description, you are free to go about your unlawful activities with impunity. The Queensland’s Government are not targeting you.

Everybody else should be afraid.